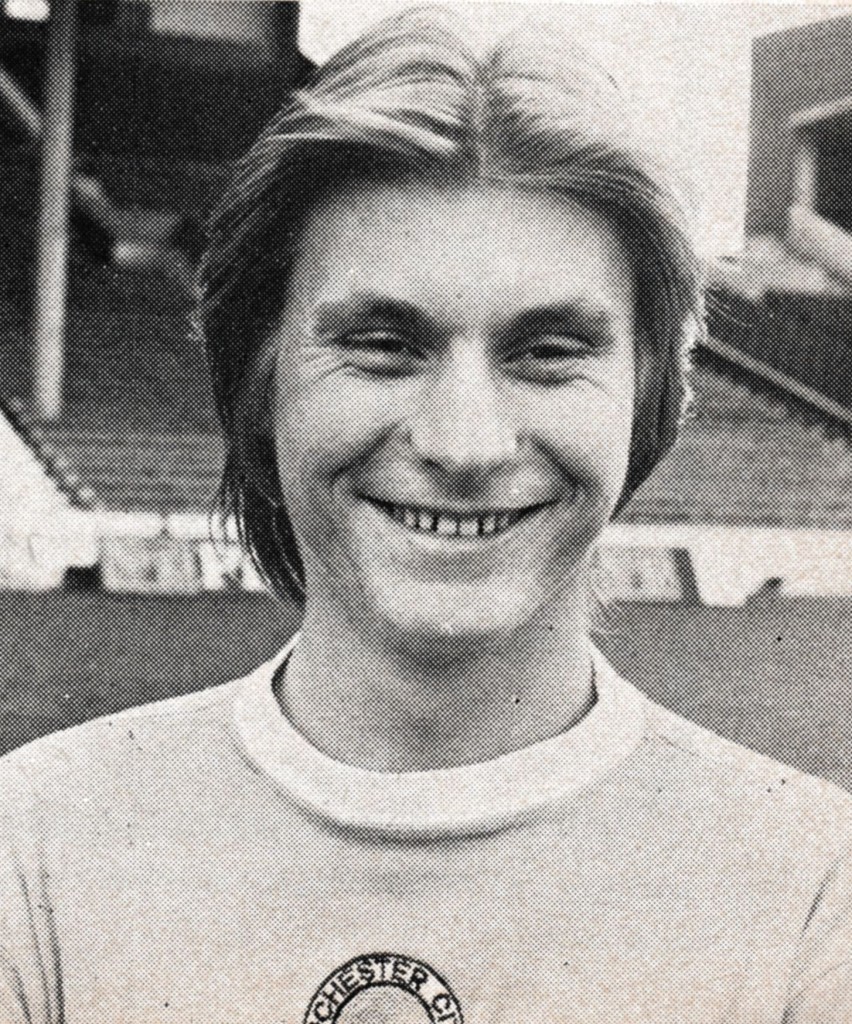 FROM AN ARTICLE PUBLISHED IN THE CITY PROGRAMME 16TH APRIL 1997
MIKE LESTER wasn’t just a City player, he was a City fan as well. So you can imagine how excited he was when Tony Book made a move to sign him from Oldham Athletic in November 1973. The Blues had been watching his progress and decided to bid for him as “one for the future”. Mike had appeared in Oldham’s League side on 27 occasions and City were not the only club to have monitored his progress. He was plunged into League action earlier than was intended because of an injury to Mike Doyle, and he wore the No. 4 shirt on his debut against Arsenal. But things sometimes have a habit of not working out as you had intended, and Mike had only two more competitive first-team outings.`These were both as substitute, once in the League and once against juventus in a UEFA Cup-tie. After a loan spell at Edgeley Park, he joined Washington Diplomats in the USA for £10,000 in March 1977, then he signed for Grimsby in the following November He took up a midfield attacking role at Blundell Park and scored ten goals in a total of 48 League games. He was then associated with nine other clubs, including a return to Stockport and some games with Lundvik in Sweden. 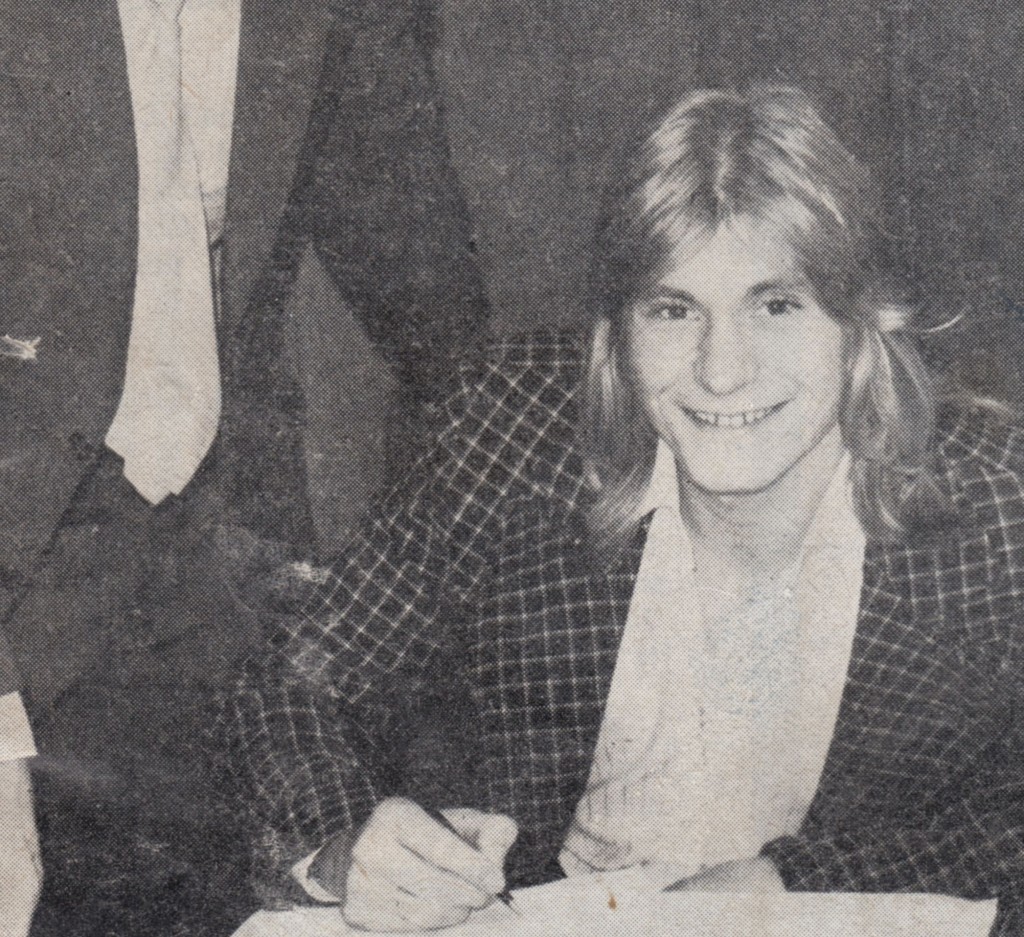 AN INTERVIEW WITH PAUL DOHERTY THE WEEK AFTER MIKE JOINED CITY, PUBLISHED IN THE CITY PROGRAMME 10TH NOVEMBER 1973

This season there have been plenty of newspaper reports about First Division clubs watching you, but was it a surprise when the deal was agreed with City last Monday ?

Shock is what I really suffered. I had seen the articles, too, but they had appeared so often without anything happening that I had lost my excitement about them. I never guessed anything would happen so quickly.

How did it happen ?

Oldham told me on the Friday that a deal was probable and the boss (Jimmy Frizzell) said he would pick me up on the Monday to take me to Maine Road to meet Tony Book. They left- me out of the Oldham side at the week-end announcing that I had a stomach upset but there was nothing wrong with me. I suppose they didn’t want to risk me getting injured.

It must have been a long week-end wait ?

I didn’t know time could drag so much. I was sworn to secrecy by Oldham, but I was itching to tell some of my team-mates. I watched the Oldham match but I couldn’t tell you a thing that happened during it. My mind was elsewhere. And when it came to Sunday night I don’t think I slept a wink. I wasn’t worred about failing the medical, or anything like that, but I was excited at the prospect of getting to a First Division club.

Would you have felt the same had it been any First Division club ?

City was the perfect place. I live just round the corner from the ground, at Ardwick, and when I was a kid I was a regular fan on the terraces at Maine Road games. City players, like Derek Kevan and Peter Dobing, used to be my heroes. I always remember my Dad taking me to City matches, he had to lift me up in his arms so I could see over the heads of Other fans on the terraces.

Are your impressions of City as a player any different to those you had as a young fan ?

Maine Road seems so different. It’s a fantastic place, I feel as though I’m in a different football world. Even the corridors leading to the offices are impressive. The size was quite frightening when they showed me around the building. But I know I’ll be happy here.

Have, you asked for any clarification about your future as a first team player ?

That’s not my place to do so. I won’t be disappointed if I’m named in the reserves at the start because I know there are many things still to learn and improve on. A first team place is not something I’m expecting, but I’m aiming for it very quickly. 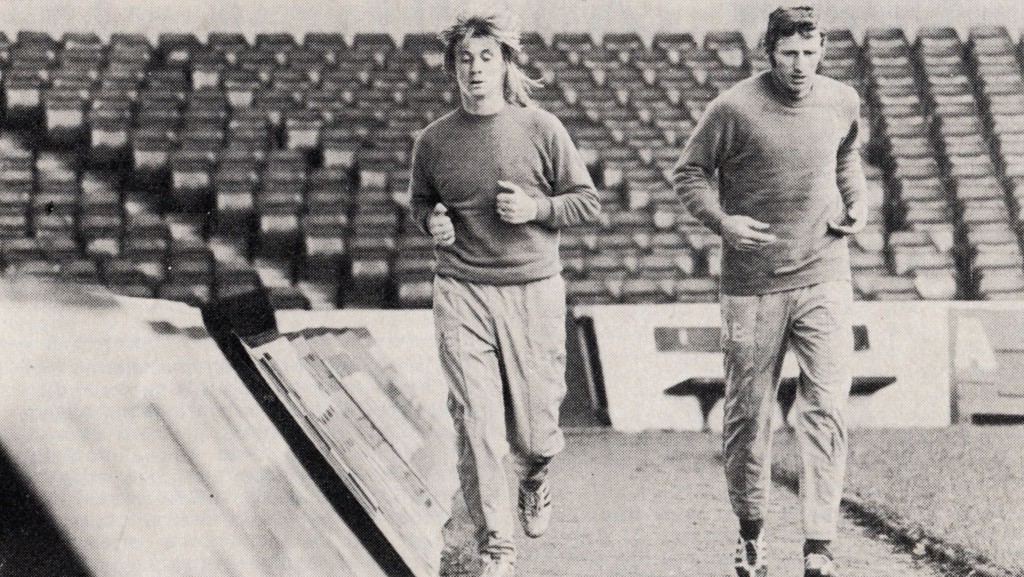 What are the things you have to improve on ?

There’s been a lot said in recent weeks about my lack of pace, l think this follows an analysis on my play which was done recently on a television programme. The real problem is to improve my quickness off the mark, this is where I have most work to do. Once I get into my stride I’m o.k. I’ve been working hard on this initial speed and I’ll be working even harder in the future.

You have been performing successfully in midfield at Oldham, although they did also play you in the back four. Have you a preference ?

Yes. I prefer playing in the back-four. I don’t mind which side although I am slightly more left-footed. Midfield is enjoyable and the involvement is more satisfying, but playing in a central defensive position seems more suited to my style and assets.

Have you seen much First Division soccer?

Only on the television. It’s obvious that they think much more quickly at the top level, but I suspect that you get more tIme to play football. I look forward to that. 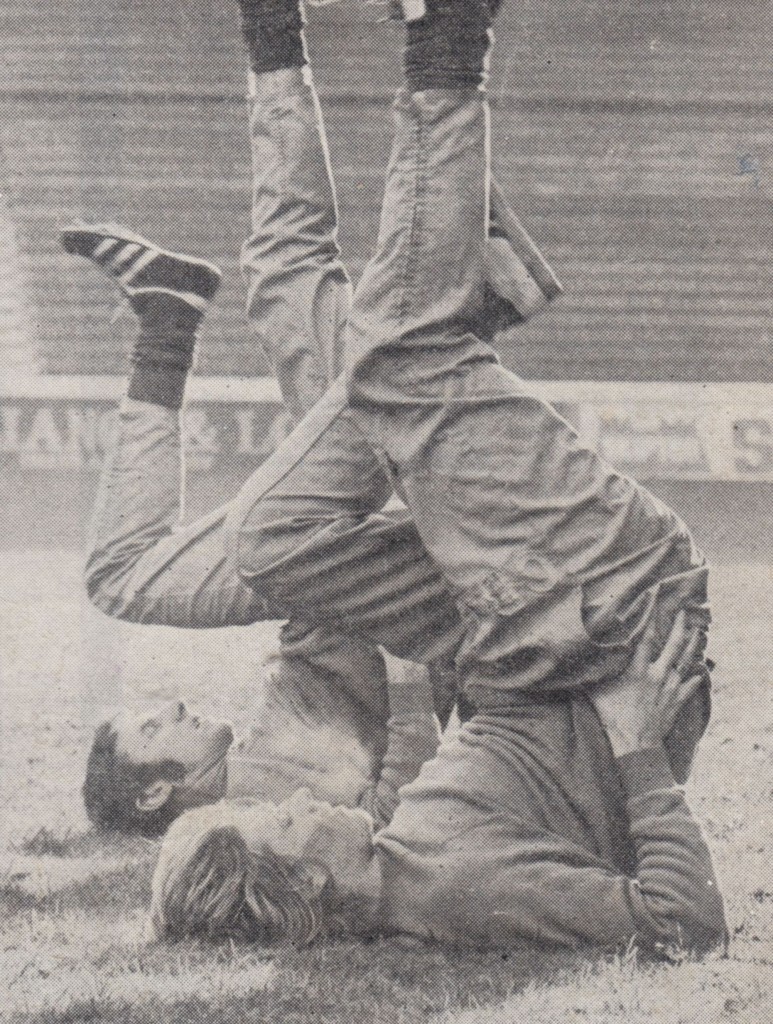 ARTICLE BY TONY BOOK ON THE SALE OF MIKE LESTER PUBLISHED IN THE CITY PROGRAMME 11TH APRIL 1977
WE ARE coming to the time of year when stock-taking becomes a very important part of club planning and the first change in our staff situation was completed when I finalised the sale of Mike Lester to American football, agreeing his £10,000 sale to the Washington Diplomats club which is managed by former Manchester United favourite Dennis Viollet.
The transaction did not merit a lot of publicity, but it’s one that had a lot of disappointment for myself and in many ways formed a milestone in my managerial life. For Mike was the first player I signed for City after being put in charge of the club in a caretaker capacity and when I did the deal with Oldham Athletic back in November 1973 I was convinced that I had snapped up a bargain who would serve City well for many years to come.
Mike, who had been turning in impressive midfield displays while at Oldham and also shown his adaptability by being a polished performer in a defensive role, was given a quick baptism at Maine Road after his arrival. l promptly included him in the side for a League debut against Arsenal, but rather sadly for the lad that proved to be the only full League appearance he made during his stay on the staff.
He had the makings of a very good player. But l felt that all the ability he possessed was never channelled properly. After an unsteady start Mike got married and it did his chances no good at all when he reported one pre-season for training overweight, which made the summer preparation work very hard for him. Mike never really got himself back in line for a crack at a first team spot in that season and was languishing in the reserves when I gave him the opportunity to join Stockport County for a loan period a year ago.
There was a glimmer of hope towards the end of 1975-76 when he showed renewed enthusiasm and worked hard for recognition. Consequently, he earned a place in the party I took on the close-season tour to Japan and Korea and it was while we were abroad that he expressed the wish to play in attack.
The switch threatened to pay off and he was worth the first team opportunity l presented in mid-October by naming him as substitute for the home game against Queen’s Park Rangers. He got his chance, too, when Joe Royle had to withdraw through injury, but it didn’t quite measure up to the requirements I had.
Understandably after such a long spell in the reserves and having suffered a fair amount of uncertainty, he asked me for a transfer. And it seemed the best thing not to stand in his way when an offer was made by the American club. Now he has departed to try and make his mark with the emerging football nation, and he does have the best wishes of myself and everyone at Maine Road in his new venture.