City, together with United, were given dispensation to start the season a week after the rest of the league due to their participation in last season’s European competitions.
The Covid-19 pandemic was still prevalent throughout the country, and the world, so it seemed that at least matches before the end of 2020 would still be played behind closed doors.
City hadn’t added to the squad since buying Nathan Ake and Ferren Torres at the end of the last campaign, and they both received their debuts at Molyneux, with Pep being unable to select seven regular starters due to either injury or positive Covid-19 tests. The team however coped very well and beat Wolves 3-1.
With so many players being unavailable City put out a very inexperienced team in the 3rd Round of the Carabao Cup, containing 5 teenagers and two 20 year olds, with debuts for Zak Steffen and 17 year old striker Liam Dilap, who scored a debut goal to help City dispose of Bournemouth 2-1.
After an encouraging first two games The club and fans were brought down to earth as, despite having 72% possession and 16 attempts at goal, they fell to a disastrous 5-2 defeat at home to Leicester, there were some glaring mistakes by the City defence, 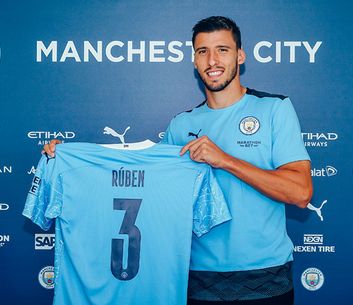 Pep realising the team’s defensive frailties persuaded the board to outlay £61.6M plus addons to bring in 23 year old Portuguese centre half Ruben Dias from Benfica, with Nikolas Otamendi moving the other way as part of the deal.
Another inexperienced team then played at Burnley in the 4th round of the Carabao Cup, with Cole Palmer, another academy star making his debut, and helping City to a 3-0 victory. 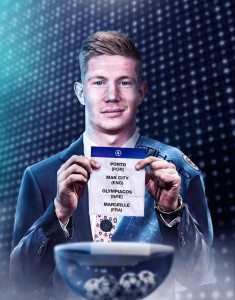 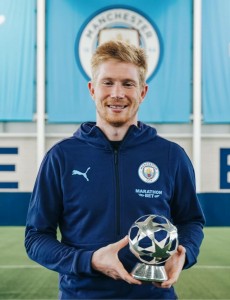 The next day City’s Champions League group opponents were drawn, and at the same time Kevin De Bruyne was named UEFA’s European Midfielder of the Year for 2019/20.
Before the international break there was one more round of Premier League games, and City might have been disappointed with a very entertaining 1-1 draw at newly promoted Leeds, putting them 5 points behind champions Liverpool but a day later the scousers were humiliated in a 7-2 defeat to Aston Villa.
two days later the transfer window closed with Alex Garcia moving on a free to Dinamo Bucharest, and Tosin Adarabioyo moved to Fulham for £1.5M.
After the International break City won a tough game against an improving Arsenal 1-0, and the in their first Champions League group game it was another impressive display at The Etihad as they triumphed over Porto 3-1, then at West Ham a few days later it seemed City’s injury worries were gradually starting to improve as Sergio Aguero was named in the starting line up, however he was later withdrawn in the 2nd half with a hamstring injury and he rejoined Jesus, Fernandinho and Mendy on the treatment table. In addition the Blues were only able to come away with one point, drawing 1-1.
The good news was that Laporte and Zinchenko returned to the defence for the Champions League game at Marseille and kept a clean sheet in a great 3-0 victory over the French side, and it was a second clean sheet four days later, as The Blues won 1-0 at Sheffield United in the Premier League.
Another 3-0 victory in The Champions League followed as Olympiakos were beaten 3-0 at The Etihad. And then in the league, Champions Liverpool also visited The Etihad, and in a great game the honours were even, with a 1-1 draw. 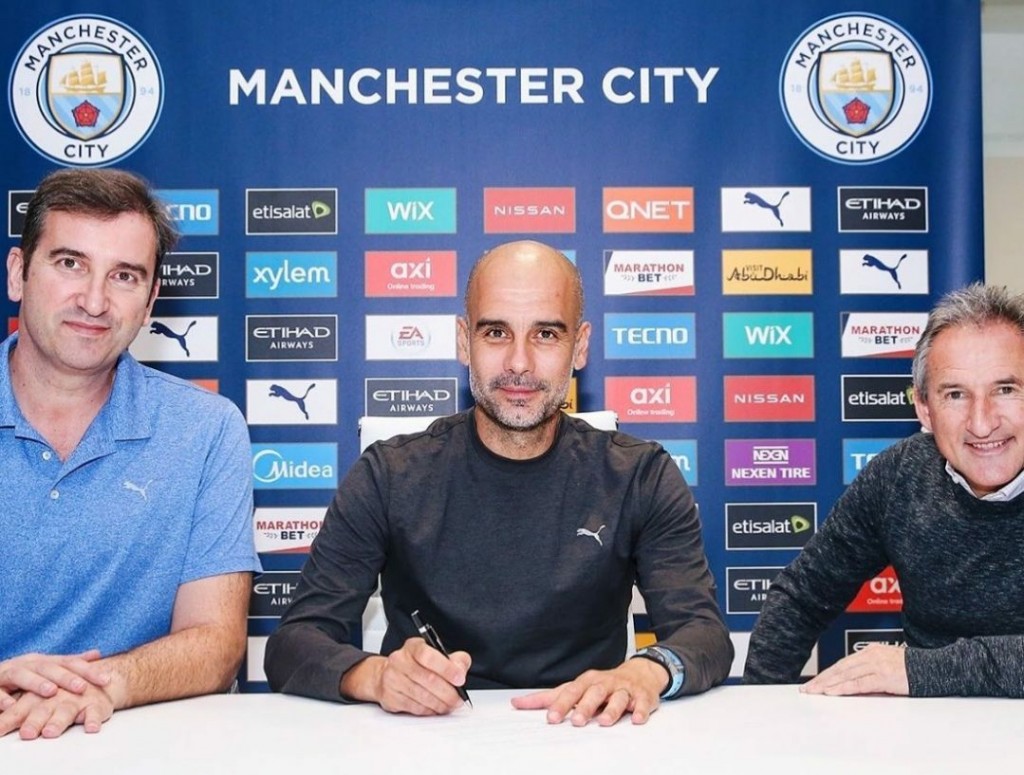 After a further International break the City fans were bouyed by the news that Pep had extended his contract from the end of 2021 to 2023, however it wasn’t as good news in the visit to in form Tottenham Hotspur as The Blues were beaten 2-0.
City’s results needed to improve, and they did with four clean sheets on the trot, the first a 1-0 win at Olympiakos in The Champions League, clinched qualification from the group, then the annual 5-0 thrashing of Burnley at home in the League.
Moving into December, City were confirmed group winners in the Champions League with a 0-0 draw in Porto, and then newly promoted Fulham were beaten 2-0 in The Premier League.
City finished unbeaten in the Champions League group section as they beat Marseille 3-0 at The Etihad. But in the Premier League Pep’s team stuttered in a uninspiring 0-0 Manchester derby draw against United at Old Trafford, and then a 1-1 draw at home to struggling West Bromwich Albion.
However in the last two days before Christmas the Blues looked better, with a 1-0 victory at Southampon, and then qualifying for the semi-final of the Carabao Cup, beating Arsenal 4-1 at The Emirates.
Prior to the home Boxing Day clash with Newcastle, Kyle Walker and Jesus tested positive for Covid-19 and would be unavailable until early New Year, and with Sergio Aguero only fit enough to make the bench, City set up with a false number 9 as they had done for many matches already, and in a very professional performance won 2-0 to move within a point of the top four with a game in hand on most teams. 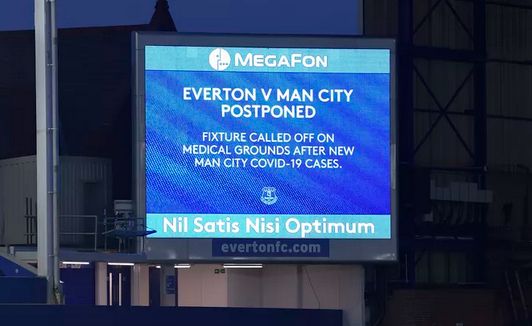 Just two days later City were due to play Everton, but there was a further outbreak of positive Covid-19 tests in Pep’s squad, and so the Premier League decided to postpone the game, and there were now doubts as to whether City’s next game against Chelsea would also go ahead, and so in a season where the matches were coming every three days, the Blues may have to fit in a further three games in to an already cramped schedule.
Kyle Walker, Gabriel Jesus, Ederson, Ferran Torres, Eric Garcia and Tommy Doyle were all unavailable for the game at Stamford Bridge due to Covid-19 however a depleted City side put in a fantastic performance to beat Chelsea 3-1. Unfortunately the the joy of the win, turned to great sadness just two days later, with the news that City’s greatest ever player, the King of The Kippax, Colin Bell had passed away aged 74. 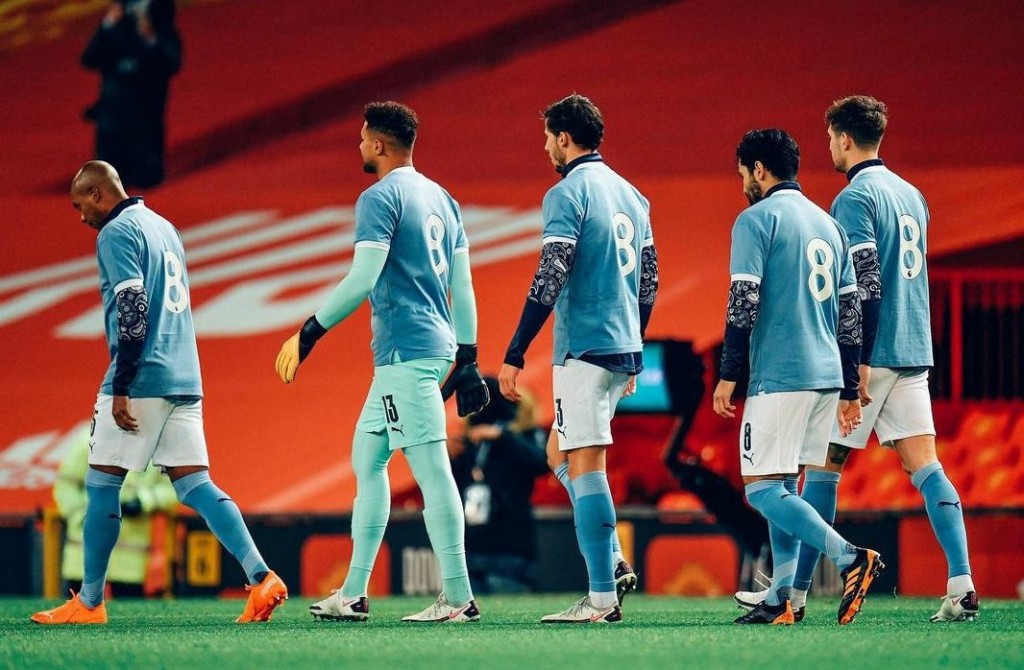 With tributes pouring in for Colin from around the football world, 24 hours later The City side marched out at Old Trafford in the one legged Carabao Cup semi-final at Old Trafford all wearing the iconic number 8 shirt, and there was not a dry eye amongst every City fan watching the emotional minutes silence for ‘The King’. The players didn’t let his memory down either, beating United 2-0 to book a place in April’s final.
There was another emotional minutes silence and tribute to Colin four days later at The Etihad where City made it six wins on the trot beating Birmingham 3-0 in the FA Cup 3rd Round. 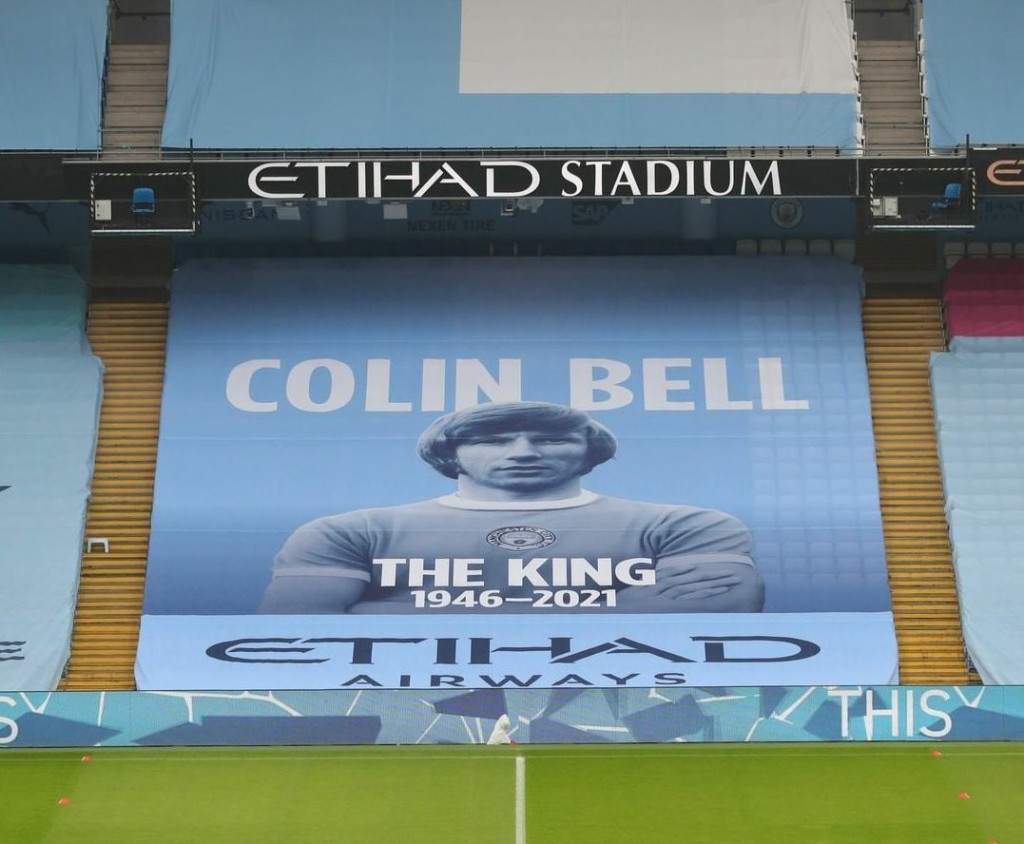 In the League, none of the top eight could put in consistent performances and results, except for City, and they went on to make it a maximum 18 points on the trot by beating Brighton 1-0, Crystal Palace 3-0 and Aston Villa 2-0. The only downside was that Kevin de Bruyne suffered a hamstring injury in the Villa game and could be out for four to six weeks.
Back to the FA Cup and The Blues got a scare at Cheltenham in the 4th round, when they went 1-0 down after 59 minutes, but rescued the tie with three goals in the last ten minutes to win 3-1. 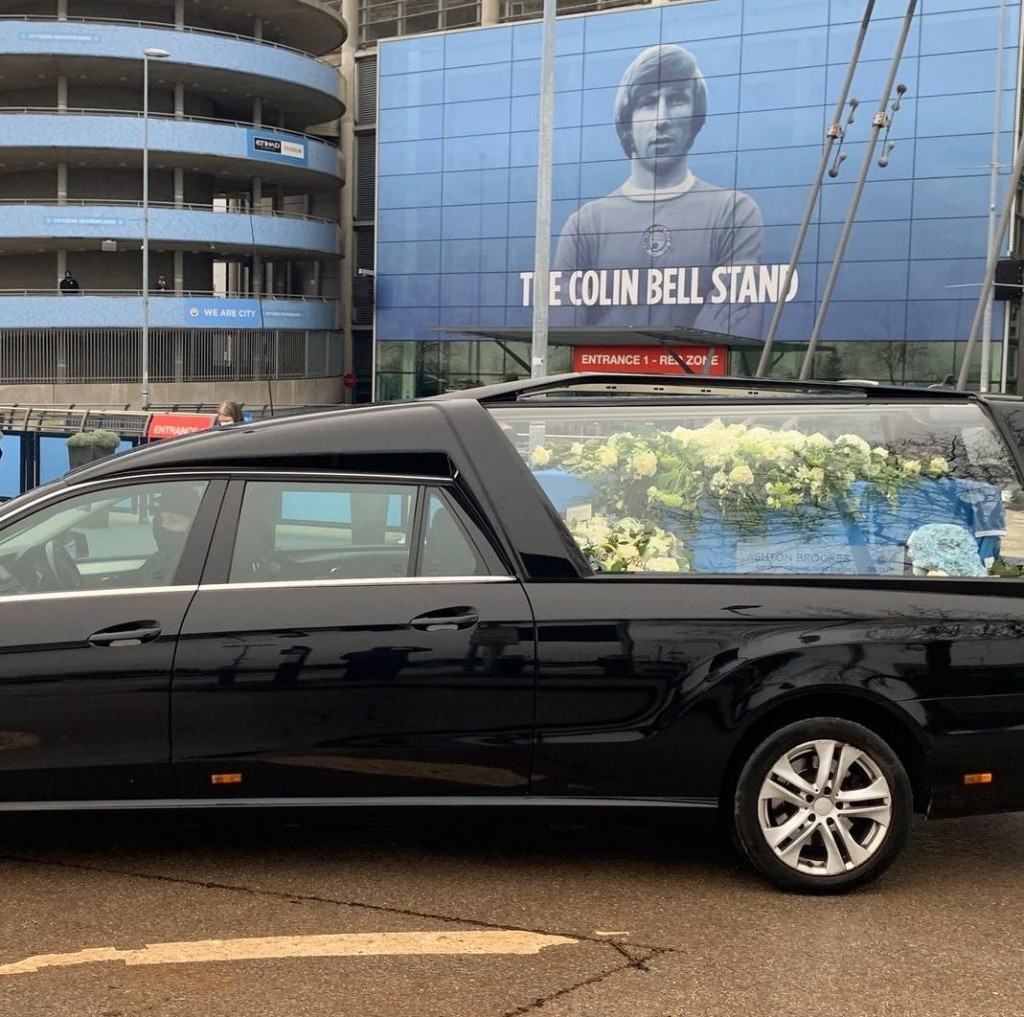 Then on 26th January Colin Bell’s funeral took place, and the corterge circled The Etihad in emotional scenes before making it’s way to Hale’s St Peter’s Church. As if in tribute, for the first time in the season City went top of the league, beating West Brom 5-0 at the Hawthorns, leapfrogging United, who were now a point behind with City having a game in hand as we reached the halfway point in the season. It got better just a few days later as Pep’s men beat Sheffield United 1-0 to go three points clear at the top. The form guide for City was going off the chart with 8 league wins on the trot and just one goal conceded in that time.
Another clean sheet followed with a 2-0 victory over Burnley at Turf Moor. 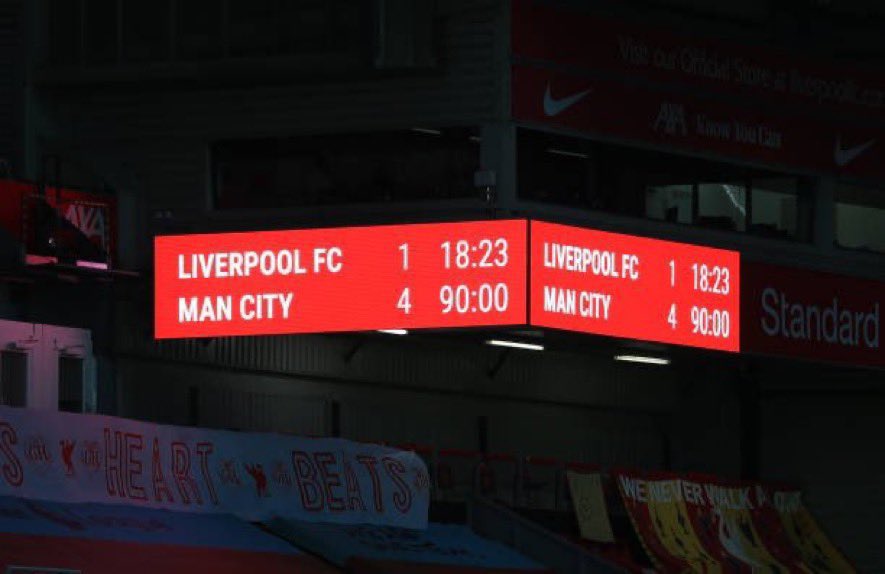 Then City put up a remarkable display at Anfield to beat Liverpool 4-1 to equal the top flight record of 14 straight wins in all competitions and go five points clear at the top of the Premier League and ten points clear of the Champions.
Pep’s men continued their assault on all four fronts by qualifying for the FA Cup Quarter Finals with a 3-1 victory at Swansea.
Ilkay Gundogan had been putting in, what could only be described as, world class performances since Christmas, and this continued in the next Premier League game at the Etihad as he scored another brace to take his tally to 11 goals in 12 games, as City beat Tottenham 3-0.
City eventually got to play their game in hand and disposed of Everton 3-1 at Goodison Park to smash their own record of consecutive wins in all competitions to 17, and with all the other teams in the top four inconsistent City were now ten points clear of United and Leicester in second and third position respectively with 14 games of the season left.

City continued their ‘perfect’ record in 2021 with a 1-0 league victory at Arsenal and then in the first leg of the first knockout round of the Champions League they beat Borussia Monchengladbach 2-0, a match that was actually played in Budapest due to Covid-19 travel restrictions. Then back in the Premier League they made it 20 wins on the trot in all competitions with a 2-1 victory over fourth place West Ham United.
March started with a further victory as Pep’s side beat Wolves 4-1 at The Etihad to equal a club record of 28 games unbeaten and 21 wins on the trot in all competitions.
Unfortunately it would be Manchester United who would curtail City’s records as they beat City 2-0 in the Derby at The Etihad.
That defeat seemed to drive The Blues on and they moved 17 points clear at the top of The Premier League as they beat Southampton at home 5-2 and then Fulham 3-0 at Craven Cottage.
And so to the Cup competitions and Pep’s side cruised into the Quarter Finals of the Champions League beating Borussia Monchengladbach 2-0 in the 2nd leg, which was again played in Budapest, due to Covid-19 restrictions. In the FA Cup City face a tough Quarter Final at Everton, however in a very professional performance they beat The Toffees 2-0.
Moving into an International break Pep had banned talk of the ‘holy grail’ that would be the quadruple, however City were certainly in a fantastic position, 14 points clear in the league with most teams having just nine games to play, finalists in the Carabao Cup, Semi-Finalists in the FA Cup and Quarter Finalists in the Champions League, It was certainly going to be a busy and exciting season run in.
With the toughest April ahead, Pep was happy to see all his players return from International duty with a clean bill of health. Then came the news that Sergio Aguero would be leaving City at the end of the season when his contract runs out. The Club announced that the Blues’ all time top scorer would be honoured with a statue to be erected at The Etihad.
And so to a tough Premier League clash at third place Leicester, and yet another great display by The Cityzens as The Foxes were beaten 2-0.
Things got even tougher in the first leg of the Champions League Quarter Final at home to Borussia Dortmund, with City winning 2-1 in a close, but entertaining game.