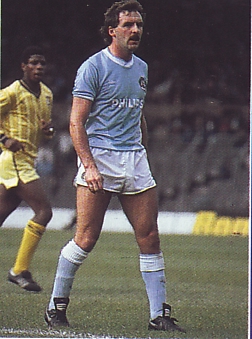 Striker, Gordon was born in Merthyr Tydfil on 3rd August 1955.
He started his playing career in 1972 in Manchester City’s youth setup, however a year later he was released, and then played for his local town club before getting his first crack at league football, joining Fulham in 1978 for £2,000.
After 6 years and 247 League apearances with The Cottagers, he moved to Chelsea for £90,000, but a year later City paid £100,000 to bring him to Maine Road, and made his debut on 12th October 1985.
He didn’t really make his mark with the Blues, making 42 appearances, scoring 15 goals, and a year after his debut he rejoined Fulham where he stayed for 5 years, finishing his English League career with a year at Wrexham.
Gordon then tried his hand at management signing on as player manager for Norwegian team Tornado FK in 1992, however this lasted just a few months and he returned to England to play a season with Northwich Victoria before his retirement from football.
Gordon was also a full international playing 16 times for Wales, scoring two goals.
After his retirement from football he started his own Pest Control company as well as being involved with hospitality work at Fulham.