Before Pep’s ‘Fourmidables’ even returned for pre season training City were active in the transfer market, first by bring Angelino back to the club by taking up the option of the buy-back clause in his contract and paying PSV Eindhoven just £5.3M for his signature.

Going on season long loans were Arijanet Muric to Nottingham Forest, Ante Palaversa to KV Oostende and Patrick Roberts to Norwich. Also Pablo Mari moved permanently to Flamengo for £1M and Thierry Ambrose transferred to FC Metz for around £2M
The Blues then broke their transfer record as they paid £63M to Atletico Madrid for Spanish International midfielder Rodrigo Hernández Cascante… or Rodri for short. 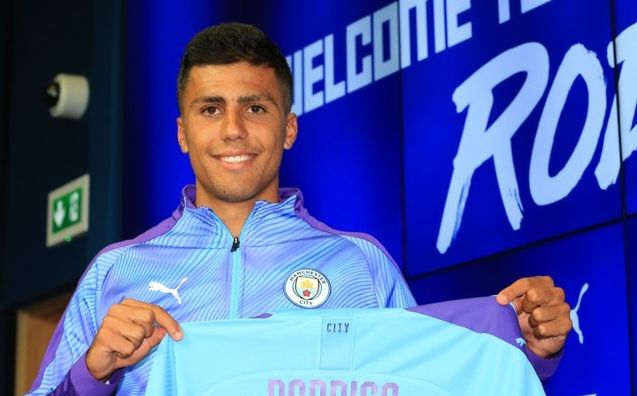 Keeper Zack Steffen then went on a season long loan to Fortuna Dusseldorf, however leaving City permanently was Fabian Delph who moved to Everton for around £9M. Another youngster gaining experience on loan was Philppe Sandler who would spend the season with Vincent Kompany’s Anderlecht.
A squad of 27 players flew off to China for the Premier League Asia Trophy, minus Foden, Aguero, Jesus, Fernandinho, Otamendi, Mahrez and Ederson, who were all returning to training later due to their international summer tournament commitments.
City booked their place in the Asia Cup final with a 4-1 victory over West Ham with impressive displays from the younger members of the squad.
Another City youngster leaving the club was Taylor Richards, joining Brighton for £2.5M
A more experienced side squandered endless chances in the Asia Cup Final against Wolves and despite dominating the game City drew 0-0 and lost on penalties. 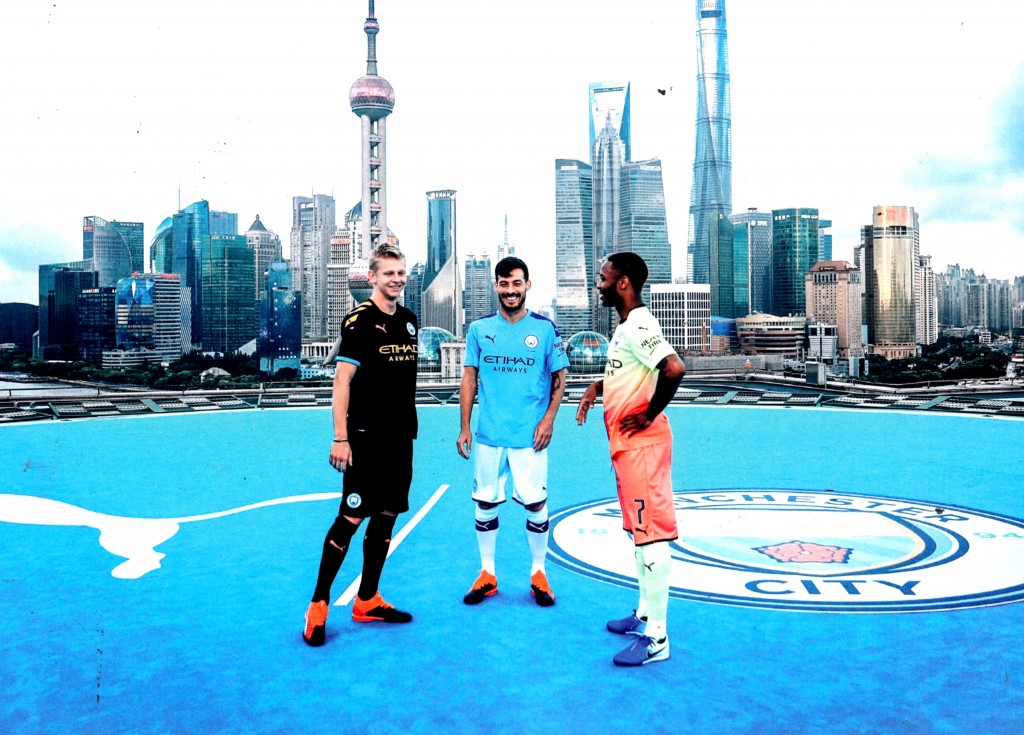 The tour then moved on to Hong Kong and a comfortable 6-1 victory over Kitchee.
The final game of the tour was in Japan and City beat Yokohama F Marinos 3-1.
Two more City youngsters moved on one year loans, Tosin Adarabioyo to Blackburn and Lukas Nmecha to Wolfsburg. Douglas Luiz moved permanently to newly promoted Aston Villa for £15M.
In the traditional season opener, the Community Shield, Liverpool put out a very strong team against a still depleted City starting eleven, still missing Aguero, Jesus, Fernandinho, Laporte, Ederson, Mahrez and Mendy, despite looking a little leggy in the second half Pep’s side put up a great performance, drawing 1-1 then winning the penalty shoot out 5-4 to lift the fifth consecutive English trophy. 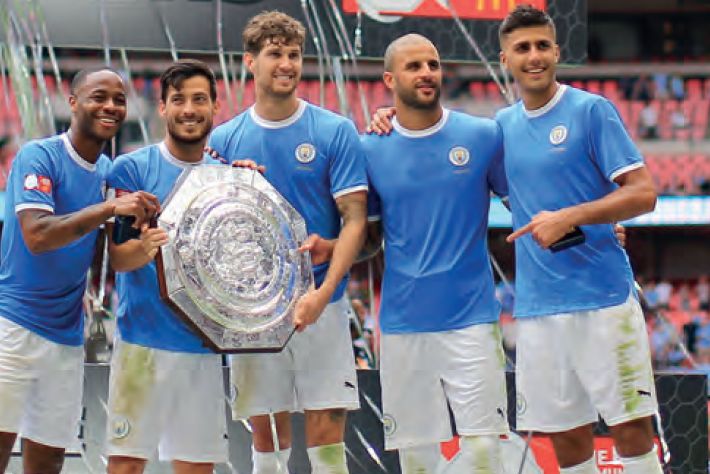 The only downside from the Community Shield was an early injury to Leroy Sane which was later conirmed as an ACL and it looked like he could be out of Pep’s plans for at least the first half of the season.
City did strengthen the squad however, with the signing of Portuguese right back Joao Cancelo from Juventus. The fee was around £60M, City paid around £28M and Danilo valued at around £32M moved the other way to join Juventus. 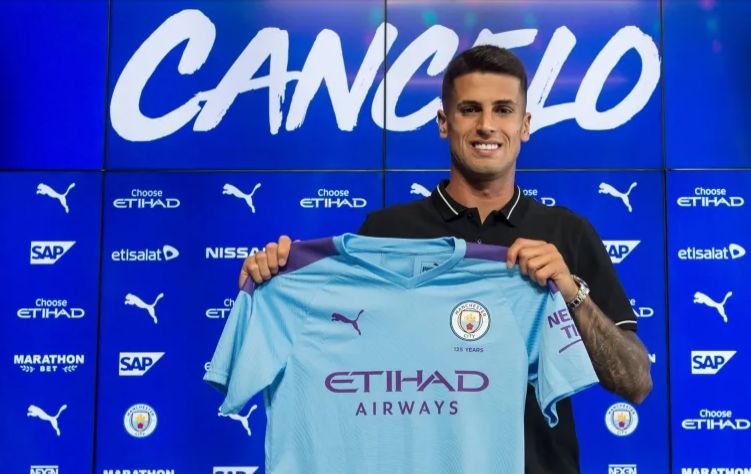 The Blues also brought in cover for Ederson and Bravo by signing 33 year old Scott Carson on a one year loan from Derby County. 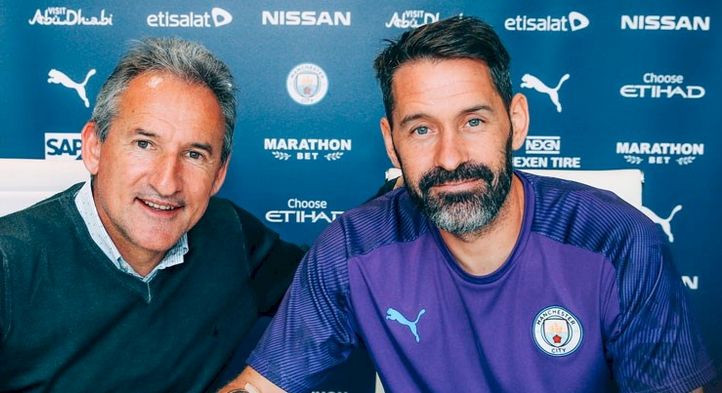 The only other move confirmed before the English transfer window closed was the purchase of Pedro Porro from Girona for around £11M and he was immediately loaned out for a year to Valladolid.
The new season saw VAR introduced in all Premier League games for the first time and their were several controversial VAR decisions in City’s opening Premier League game at The London Stadium, however The Blues overcame a disallowed goal with a magnificent performance to beat West Ham 5-0 including a hat-trick for Raheem Stirling.
Unfortunately a week later despite another fantastic display by Pep’s team against Tottenham at The Etihad they could only draw 2-2. VAR incorrectly robbing City of a last minute winner and failing to see a clear and obvious penalty when Rodri was ‘rugby tackled’ in the Spurs box. Pep later commenting “maybe VAR had gone out for a coffee when the incident occurred”.
David Silva produced a man of the match performance in his 400th appearance for City as they beat Bournemouth 3-1 on the South coast. The Blues then went on to make it 14 goals in the opening four games as they beat Brighton 4-0 at The Etihad to go into the first International break, with the bad news that Aymeric Laporte would be sidelined for around six months after his knee was injured in a clash during the game with The Seagulls.
During the break over 51,000 City fans paid tribute to Vincent Kompany in his testimonal match, as Manchester City Legends drew 2-2 with a Premier League All Stars XI with all profits from the game going to the charity Tackle4MCR.
It would not be a happy return from International duty as City’s defensive frailties were exploited at Carrow Road, Norwich beating Pep’s side 3-2. After five games, although still in second place, The Blues were already five points adrift of leaders Liverpool. There was more bad news to follow as John Stones suffered a muscle injury in training and a six week absence was predicted, leaving Otamendi as City’s only senior centre back in the squad. Enter Fernandinho who slotted in beside Otamendi for City’s first Champions league game of the season.
City travelled to the Ukraine and put in a great performance to beat serial opponents Shakhtar Donetsk 3-0. Then three days later, in the match to celebrate 125 years of Manchester City, the Citizens ripped apart Watford 8-0 at the Etihad scoring the first five goals in the first 18 minutes. 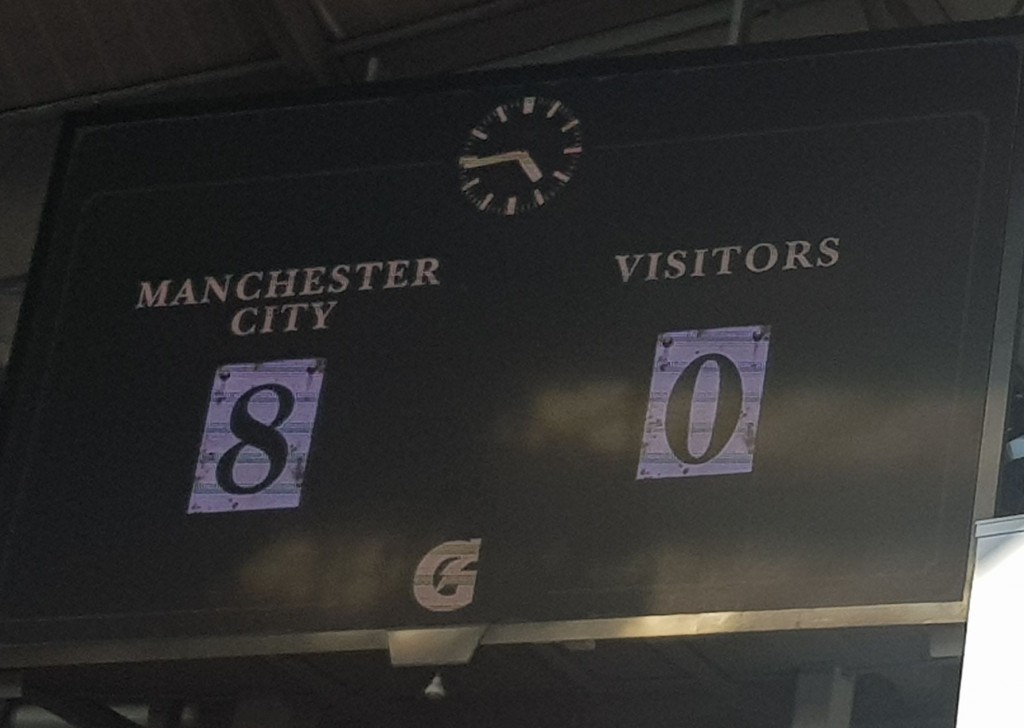 A youthful City team swept aside Preston 3-0 at Deepdale in what could have been a tricky Carabao Cup 3rd Round tie. Then a stronger team won 3-1 at Everton before a second Champions League victory, 2-0 against Dinamo Zagreb at The Etihad.
A tired looking City then surprisingly lost 2-0 at home to Wolves, and moving in to the second International break of the season Pep’s side were already eight points behind leaders Liverpool, who had a perfect record of eight wins from eight games.
Following the international break City were still struggling with a major injury crisis in their back line, and Pep played both Rodri and Fernandinho as Centre Halves for the trip to Crystal Palace, City put up a great performance, winning 2-0. However, things went from bad to worse in the treatment room, prior to the home game against Atalanta in The Champions League Zinchenko suffered a knee injury in training with a possible two month absence ahead of him. And then Rodri pulled up with a hamstring injury in the game against Atalanta, which City won comfortably 5-1.
Despite all the defensive injuries The Blues kept a clean sheet in their next game, beating Aston Villa 3-0, and in doing so cut Liverpool’s lead at the top of the table to six points.
Three days later, a much changed City team beat Southampton 3-1 to reach the Quarter Finals of The Carabao Cup with City debutant, Tommy Doyle, Grandson of Mike Doyle, putting in a great display in midfield.
The Saints were unlucky to play City again at The Etihad, this time in the league, and they put up a much better performance, however The Blues beat Southampton 2-1.
In the Champions League, City’s trip to Italy to play Atalanta should have been an easy victory, however Ederson had to be replaced at half time by Claudio Bravo as he had suffered a muscle injury, and unfortunately Bravo’s performance did not inspire confidence, and his rash challenge way out of his area saw him sent off with nine minutes left to play. Kyle Walker pulled on the keeper’s jersey and managed to keep Atalanta from scoring again as the match finished 1-1.
In the last game before another International break City visited Anfield in a match that the media were saying that if Pep’s side lost then, even though there was only a third of the season gone, it was The Scousers’ title. Aided by a controversial VAR decision and another questionable performance by Bravo, Liverpool did win 3-1, and despite City dominating most of the game, they were now nine points behind Klopp’s side.
The International break enabled Ederson to recover from his injury and his return heralded a great 2-1 victory over Chelsea at The Etihad, however the injury curse hit the Blues again and Sergio suffered a groin injury that could see him sit out for the next six weeks.
A subdued performance in the Champions League in Manchester saw City qualify for the knock out stages with one game to spare, drawing 1-1 with Shakhtar Donetsk.
Off the field The Sheikh sold another 10% of the club to Silver Lake, an American private equity firm for £389M, valuing City at £3.74 Billion, the most valuable football club in the world, Sheikh Mansour still holding 77% of shares in the club.
In addition it was announced that Mansour’s City Football Group had acquired a majority stake in their eighth football club, agreeing a deal to take a 65% stake in Mumbai City FC in the Indian Super League. 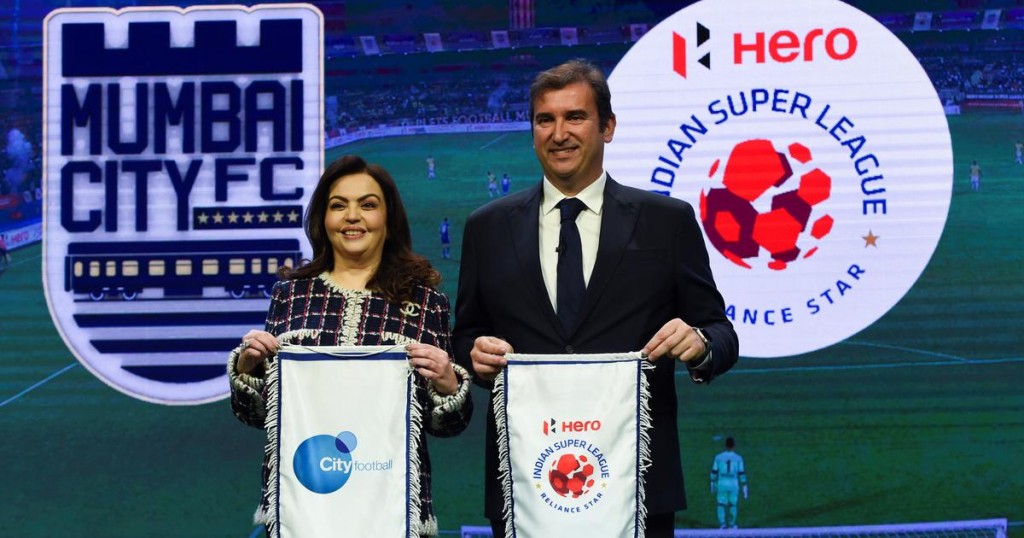 Unfortunately back on the field City limped to a 2-2 draw at Newcastle, leaving them now in 3rd place and 11 points behind leaders Liverpool.
Despite a 4-1 victory at Burnley, another lacklustre performance at the Etihad saw United grab the Manchester Derby bragging rights as they beat City 2-1 to lengthen the gap at the top to, a maybe, insurmountable, 14 points from top of the table Liverpool.
With The Blues already qualifying in first place in the Champions League, Pep picked a virtually second eleven for the trip to Dinamo Zagreb, and they put up a great performance with a 4-1 victory.
Back in the league and City visited the Emirates and destroyed Arsenal, winning 3-0. The youngsters then put up a great display in The Carabao Cup Quarter Final, winning 3-1 at Oxford, before a magnificent performance in the League, beating second place Leicester 3-1 and cutting the gap on Liverpool to 11 points, the Scousers however now having a game in hand.
The first game after Christmas, didn’t bring much cheer as City were beaten in the league again, 3-2 at Wolves, however with the games coming thick and fast, they then beat Sheffield United 2-0 two days later, and then Everton 2-1 on New Years Day.
With the defence of the League looking doubtful, The Blues started their defence of the FA Cup with a good 4-1 victory over Port Vale in the 3rd Round.