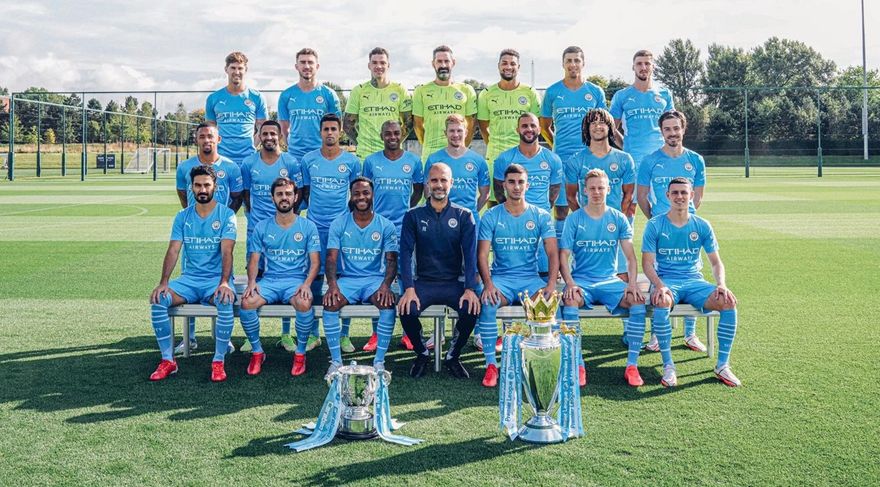 With most of the squad away with their countries for EURO 2020 and the Copa America, come the 1st of July City’s coffers were boosted by almost £50M with deals going through for players who had been out on loan for most of last season.
Angelino joined RB Leipzig on a permanent deal after his appearances for them activated their £16.3m buy option in his loan deal. Then Lukas Nmecha joined Wolfsburg on a permanent transfer for a fee of around £11m plus add-ons
Leeds United exercised their option to buy Jack Harrison for an initial £11M after spending three years on loan at the Yorkshire club. And then The Blues coined in a further £11M through a sell on clause as Jadon Sancho moved to Man United from Dortmund.
Due to the uncertainty of Covid-19 and the limited time before the start of the season, there would be no money spinning world pre-season tour, instead friendlies with league sides were arranged, to be played behind closed doors at the Academy Stadium.
First up were Preston, and a young side with a sprinkling of senior players beat the Lilywhites 2-0. Then a similar young squad saw off Barnsley 4-0, and then Blackpool 4-1. 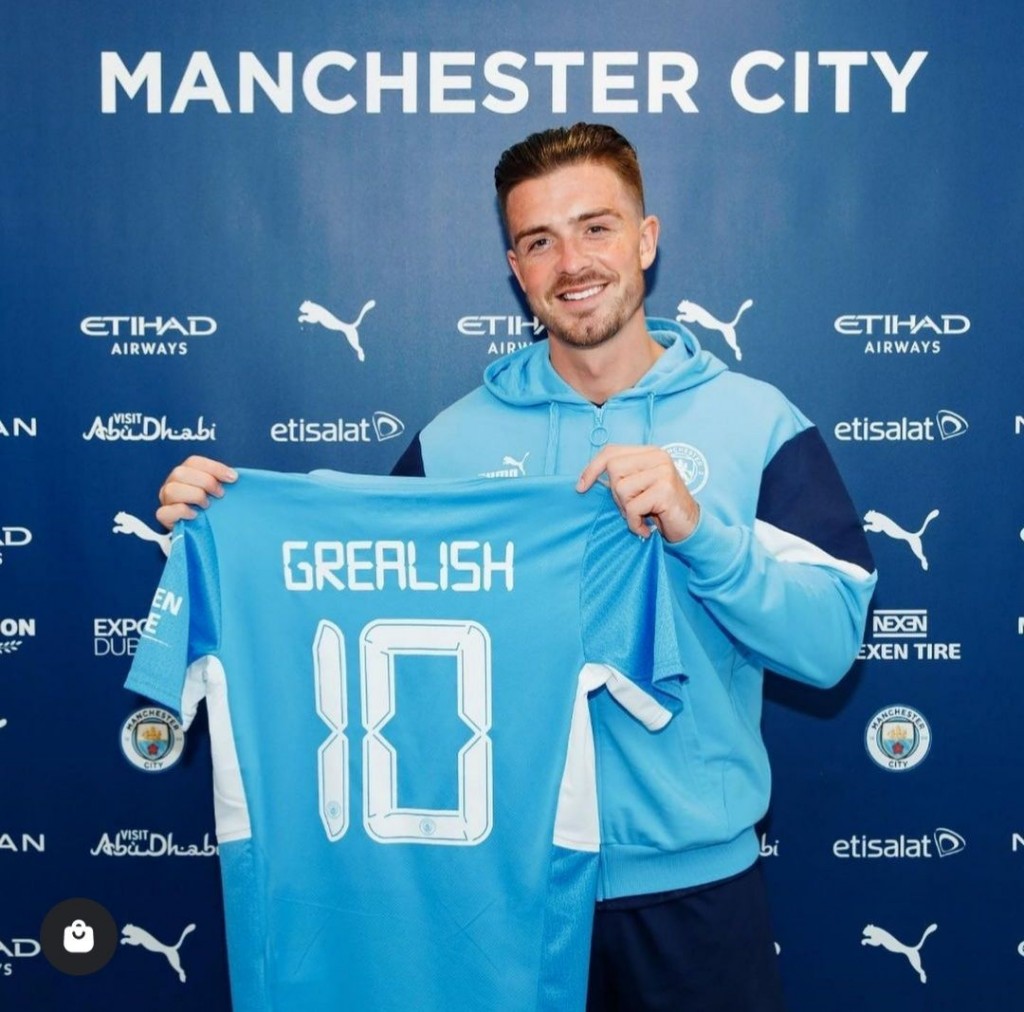 City then made a major statement in their attempt to defend their Premier League crown, As they met Aston Villa’s Jack Grealish’s £100M release clause to bring the England star to the Etihad, Jack stating “City are the best team in the country with a manager considered to be the best in the world, it’s a dream come true to be part of this club”.
Still without the services of most of the EURO2020 stars, City had to field a very much understrength side to face, basically a full strength Leicester side in the Community Shield, despite a good second half display by Pep’s side, former Blues striker Iheanacho scored a last minute penalty that saw City lose 1-0.
It wasn’t the best start to the Premier League either, with so many of the senior squad missing from the starting lineup, City visited Tottenham and despite a decent performance, lost 1-0.
For the first time in nearly 18 months The Etihad welcomed a capacity crowd, as Covid-19 restrictions had been all but removed, and a much stronger City side, still without Kevin De Bruyne, John Stones and Phil Foden, tore a newly promoted Norwich side apart, winning 5-0.
In the week that followed City made a sensational, but unwelcome statement that Benjamin Mendy had been suspended after being charged and remanded in custody on four counts of rape and a sexual assault. 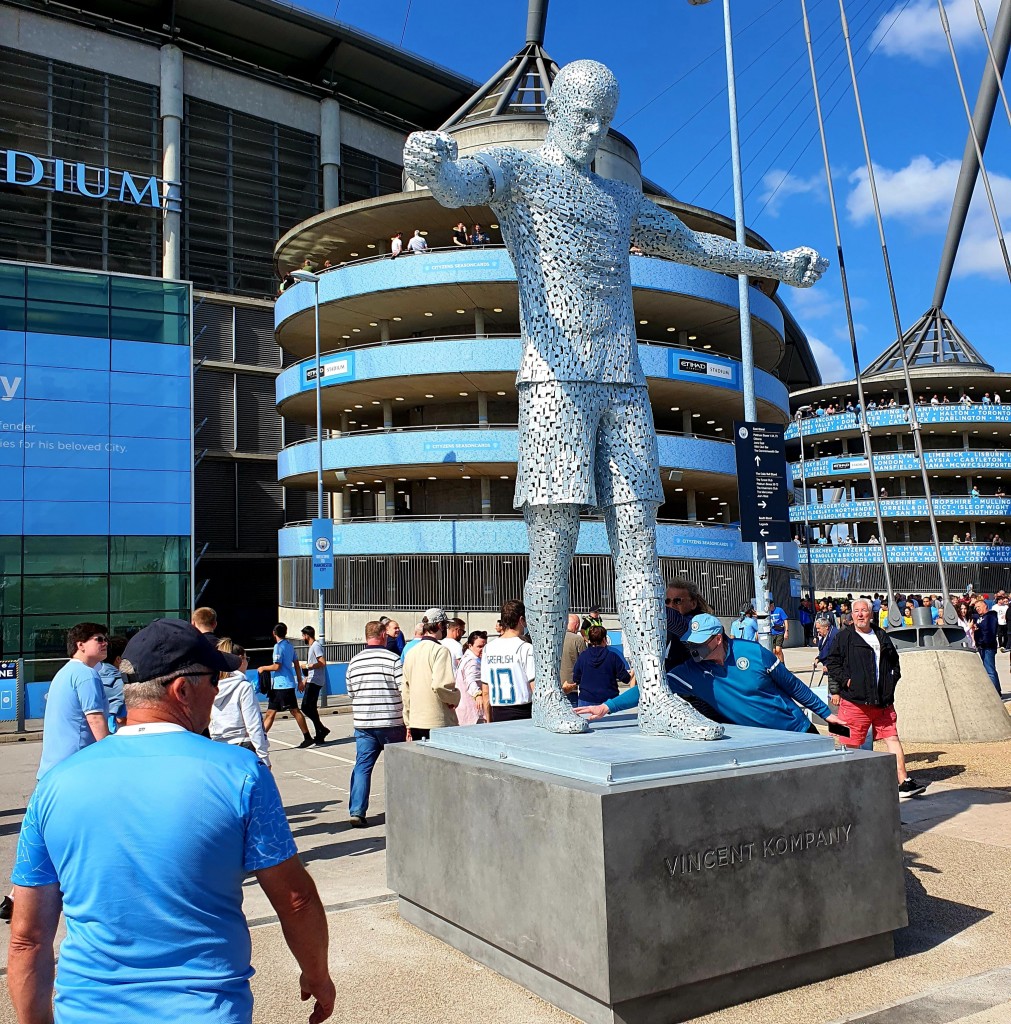 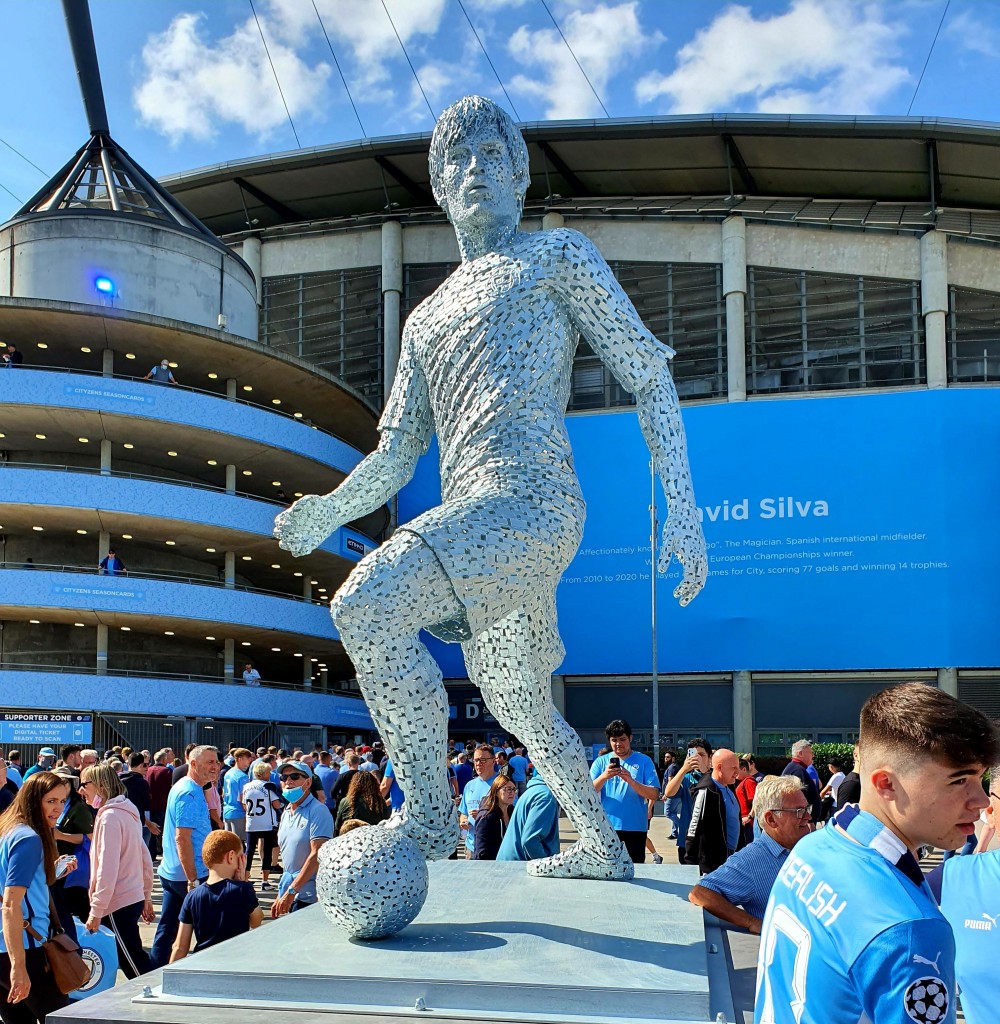 On the day of the next game, against Arsenal, two amazing statues were unveiled at The Etihad to honour City legends Vincent Kompany and David Silva, and on the pitch City’s current would-be legends did them proud with another scintillating 5-0 victory, the third consecutive home match won by that score.
Following the international break Pep, unusually, named an unchanged side again for a tough trip to Leicester City, the Citizens dominated the game and won 1-0 to make it three victory’s in a row.
The start of the Champions League group stage began with a very entertaining 6-3 victory over RB Leipzig at The Etihad, however at home in the league three days later, a tired looking City side dropped points in a 0-0 draw against Southampton. Pep commenting: “Always when the game is not good I feel bad for [the fans]. They come to see a show, to see a game and when it doesn’t happen I feel a bit guilty because we didn’t play good. We were not good in our build-up. We lost simple balls in our process because we were not clever and a little bit sloppy.”
City continued their ‘love affair’ with the League Cup, beating Wycombe 6-1 in the third round, Pep gave the entire Academy outfield defence, Conrad Egan-Riley, Luke Mbete, Finley Burns, Josh Wilson-Esbrand, their senior debuts, along with Romeo Lavia, and then James McAtee became the night’s sixth debutant when he came on as substitute in the second half.
The Blues then faced three tough away games, the first probably the toughest, away at Chelsea. City dominated the game with a brilliant performance and came away 1-0 winners. The victory was Pep’s 221st win during his time at City and broke the record for the most victories by a City boss.
City then put up a great performance in Paris, but paid for their missed chances as Paris Saint Germain came out 2-0 winners.
In a classic game at Anfield the Blues were unlucky to just come away with a point, drawing 2-2 with Liverpool. City’s momentum however was stalled, due to another international break.
For the first game back after the break Pep was without Ferren Torres who suffered a broken bone in his foot whilst playing for Spain, also Jesus and Ederson were not back from South America in time to be considered, In addition, rested from the starting line-up for the match at home to Burnley were Walker, Dias and Grealish, however, despite a rather lacklustre display, City won 2-0. 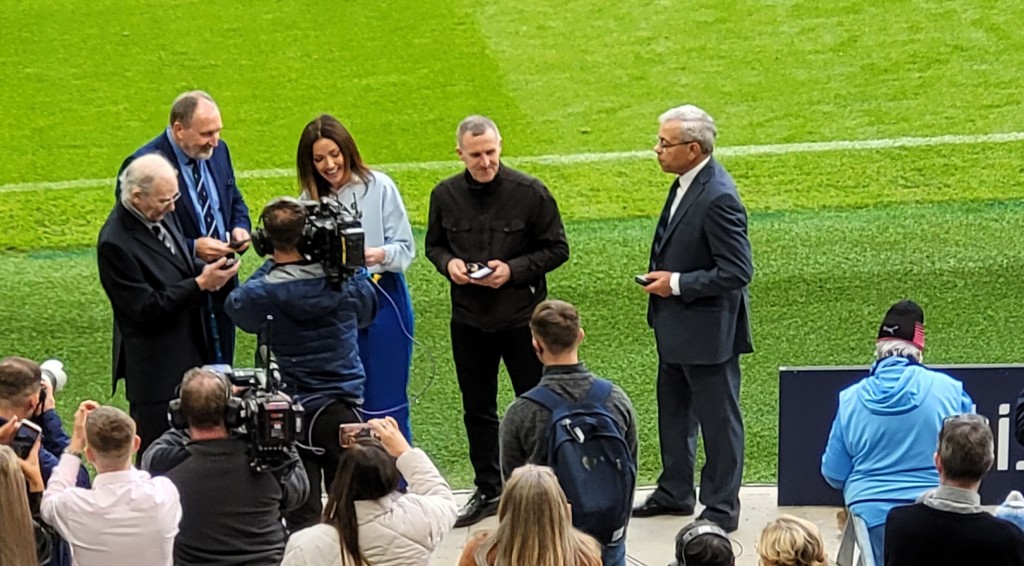 in 1968 only the main players in the City squad received Division One Championship medals, however this season the Football League approved City’s request for four more medals for players who missed out in ’68. And so during half-time in the Burnley game Bobby Kennedy, Stan Horne, and the sons of Paul Hince and Harry Dowd were presented with their medals by Mike Summerbee.
In the third match of the Champions League group stage City travelled to Belgium and in, what Pep described as The best European City performance during is tenure, the Blues beat Club Bruges 5-1.
City continued their great form in the Premier League with a fine 4-1 victory at Brighton, however City were knocked out of the Carabao Cup for the first time in the last 1,827 days as they were beaten on penalties following a 0-0 draw after 90 minutes at West Ham.
Unfortunately The Blues failed to score again, this time at home in the Premier League, Laporte was also sent off in a 2-0 defeat to Crystal Palace.
The Blues put a bad week behind them with a good 4-1 victory at home to Club Bruges in the Champions League, and then in the Derby at Old Trafford, Manchester United were totally demoralised as City dominated them with an amazing display which ended in a 2-0 win for Pep’s marvels.
Moving into another International break City were well placed, second in the league just three points behind Chelsea. 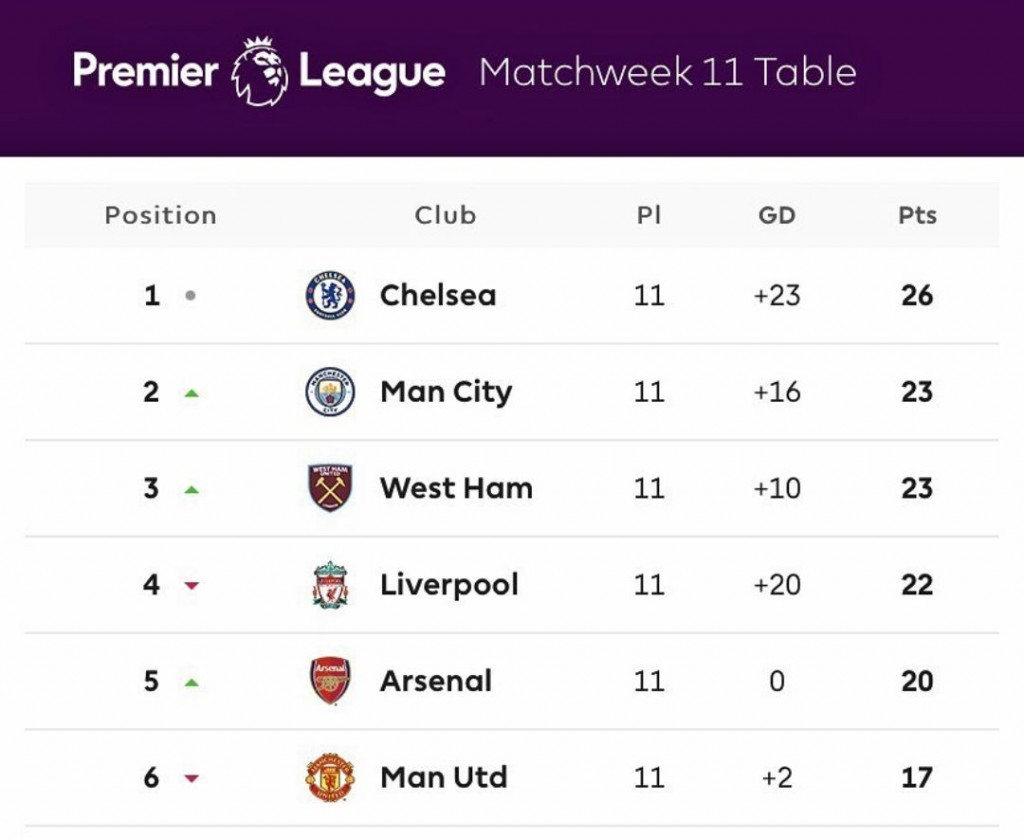 After the International break it was back to a busy programme of matches. The first three games all at the Etihad. In the League it was a comfortable 3-0 victory over Everton, and then another great European night as a boisterous capacity crowd cheered on City to come back from 1-0 down to beat star studded PSG 2-1 in possibly City’s greatest European performance, especially when they could not call on the services of Kevin de Bruyne, Phil Foden, Jack Grealish and Ferren Torres, who were all unfit.
With the same delapidated squad City then went on to beat high flying West Ham 2-1 and were now just one point behind leaders Chelsea.