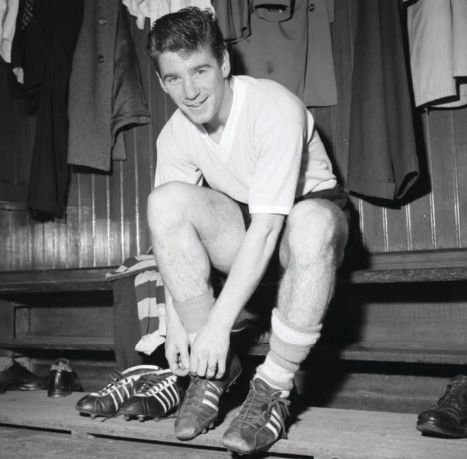 Forward, Gerry was of Scottish roots but was born in New York USA on 11th April 1938. After moving back to the UK, Gerry got his first chance of league football with Motherwell in 1956, after 11 appearances over two years he joined St Mirren where he was top scorer for two seasons
He joined City for £17,500 from St Mirren on 2nd November 1960 and made his debut three days later in a defeat at Bolton’
After a rather disappointing first season when The Blues were mainly fighting a relegation battle Baker returned to Scotland joining Hibs in November 1961 for a fee of £18,000.
In 1963 he moved to Ipswich for £25,000 and spent four successful years there before moving to Coventry in 1967 and, apart from an eight game loan period with Brentford, that’s where he ended his professional career in 1970.
He moved into non-league football as player manager with Margate, then played for Nuneaton Borough, Bedworth United and finally hanging up his boots at Worcester City in 1975.
At Full International level he gained seven caps with USA.
He had a very sporting family, his Brother, Joe played for Arsenal and England and Gerry’s daughters both appeared as athletes for Great Britain, Lorraine running in the 800m final at the 1984 Olympics
Gerry died at the age of 75 on 24th August 2013.