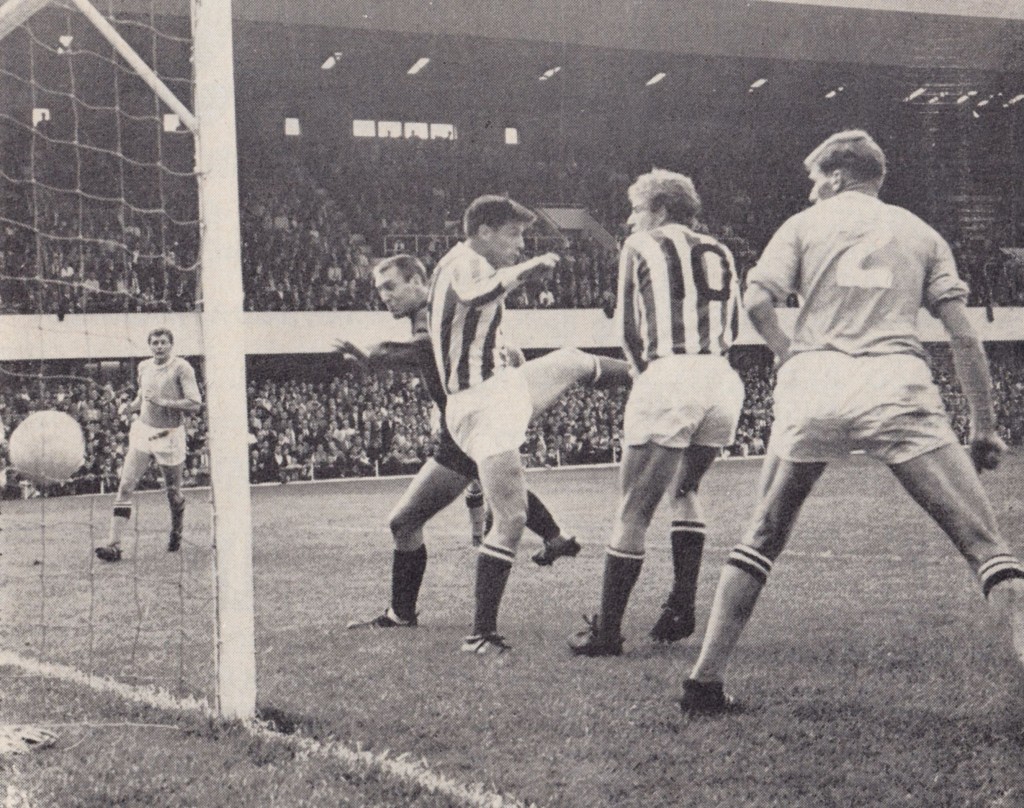 This knowing Stoke side, with it’s quick eye for opponents’ mistakes, had the guile and resolution to contain Manchester’s fitful enterprise in the first half but nowhere near the pace for their unbroken ferocity in the second. All the stealth of Vernon and Dobing and the intense calm with which Elder had distinguished Stoke’s defensive play counted for little once Manchester’s attack leapt dramatically into full power.
The last 20 minutes in which three goals were scored, had all the explosive quality which Manchester City’s supporters have now come to regard as the common coin of their home matches.
But early on there were rumblings of justified anxiety on the terraces as Stoke used the full weight of their mature understanding of what can be expected of young sides. Bloor’s playing of Summerbee may have lacked elegance to the point of being bludgeoningly blunt, but it reduced the threat from the centre forward to occasional thrusts. Bentley had much less success in trying to shut out Lee than Elder had on the other flank with Coleman, but the overall effect of Stoke’s tight defensive work was to smother Manchester’s attacks before they could gather momentum.
Yet the menace was always visible in Manchester’s work. On the quarter hour Summerbee jabbed a short back pass into Young’s stride and sped forward for the return as it came swiftly from behind him. Bloor recovered jusy in time to sweep the ball from between Summerbee’s feet as he entered the penalty area.
Three minutes later one of Elder’s less careful clearances cannoned off Coleman’s legs. Summerbee slipped the ball diagonally into the penalty area for Young, and Banks was just able to turn the ball round the far post with a full length dive.
Stokes attacks were less red in the claw than this sort of thing, lots of little chips by Vernon, and short fastidiously selective bursts of acceleration by Dobing. But they had much point in their crisp accuracy. One of Vernon’s cunning through passes put Mahoney cleanly in front of goal and only Book’s late rush robbed Mahoney of a shot.
The hint was followed immediately by a firmly taken goal for Stoke, Dobing hurried urgently away from Pardoe on the right and found Vernon with time to measure his cross out to Burrows on the left. Mulhearn only managed to parry Burrow’s shot, and Dobing was waiting to kick the ball home.
The shock among the Manchester supporters was tangible. It took an elegant dummy from Summerbee, which left Bloor staring at sky, to revive their heart. And it was Summerbee’s leap which unsettled Banks, trying to snatch Coleman’s cross out of the air after 35 minutes: Banks punched at the ball, Young struck it hard into the net.
Banks was under heavy fire all through the second half, and although he was beaten three times in it he was never caught like that again. He saved remarkably from Lee, rushing back to his goal line and hurling himself full length to take the ball with both hands, then he smacked down another shot from Lee peremptorily when he seemed to be hopelessly unsighted.
But this half belonged principally to Lee, whose startling side stepping runs and fierce shooting repeatedly chopped a path to Stoke’s goal.
After 63 minutes his swerving shot turned across the goal for Coleman to shoot Manchester’s second goal. 10 minutes later Lee was waiting for Summerbee’s pass from the right, and he beat Banks decisively. Two minutes from the end it was a shot of such power that the ball was momentarily lost to view which gave Lee his second goal.
Burrows scored with a free-kick immediately afterwards for Stoke. But although Stoke had marginally won the battle for the first half, we now knew that that had been only a phoney war.
ARTHUR HODCROFT WRITING IN THE OBSERVER 24TH DECEMBER 1967