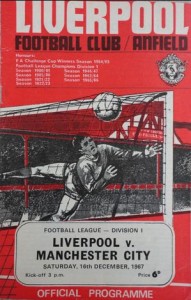 Ten minutes before the scheduled start of the top-of-the-table game between Liverpool and Manchester City at Anfield this afternoon, the Liverpool chairman, Mr Harold Cartwright announced over the public address system that there could be a delay in starting “owing to unforeseen circumstances.”
I understand that the reason for this was that Roger Hunt and Tommy Lawrence, who live at Warrington, had been delayed in heavy traffic and had not been able to get to the ground at the normal time.
On the dot of three o clock the Liverpool team came out, some five minutes after the City team had appeared, and they were as selected, with Hunt and Lawrence taking their normal places.
The game started between two and three minutes late.
City started off in whirlwind style after Liverpool had got a corner in the opening seconds, and a brilliant bit of work by Coleman on the left saw Lawrence having to leap high to tip out the dangerous cross.
City were moving the ball about in exhilarating style and i’ve rarely seen the Liverpool defence under such pressure in the opening minutes of a game at Anfield. Another good City move between the inside men saw Bell turn on to the ball from Summerbee’s pass and drive it wide, while Lawrence came out intelligently to intercept a dangerous Young pass to Bell.
Liverpool replied with a couple of shots by Hunt which were off target, but the greatest feature so far had been the speed with which City had attacked, with five men up and each one driving down hard.
Both Bell and Lee were down injured at one stage after tackles by Smith and Hughes respectively and in order to stop play Book cracked the ball into the Kemlyn Road stand. Both trainers were on and the City substitute came out as well to help in treating Doyle, so that City had three men under attention at the same time.
The game was held up for two or three minutes while all the treatment was being given and the worse off was Bell, who resumed limping.
Liverpool were coming right back now, with some great work by Smith driving them on, and Mulhearn had to make a spectacular catch from Callaghan’s centre as Hateley moved in.
Liverpool had yet another goal-line save from Hughes to prevent them going behind, from the corner, Bell hit a tremendous shot through the crowded goalmouth, which Hughes turned away and Young’s shot from the opposite side of the goal just swung wide of the far post. The power and shooting ability of the City forwards was amazing.
Liverpool came with a good attack in which Hunt sent the ball across to Callaghan whose quick shot was saved low down by Mulhearn.
So far this was the best and most exciting game seen at Anfield this season, a true test between two of the top teams in the land which had the capacity crowd in a continual uproar of excitement.
In the first 20 minutes City had don more shooting at the Liverpool goal than most visiting teams do in 90 minutes at Anfield.
Liverpool began to look more dangerous with their more studied build-up in attack, and Hateley made a good effort from a bad angle but drove into the side netting. From an accurate centre by Hughes, Hateley bundled into Mulhearn as the goalkeeper went up for the ball, but surprisingly the referee waved play on and Heslop scrambled it away.
The City traner continued to have a busy day. He had to attend to Coleman before the wingman took a corner, and after Young smashed the ball high over the bar, Summerbee went down in the penalty area and the trainer was on again to him.
Every Liverpool player came back into their own penalty area for a free kick taken by Coleman just outside the box. But he put the ball too close to Lawrence, who made an excellent catch,
Three City shots were charged down by Liverpool defenders in a moment of intense excitement, and Lawler was particularly fortunate to get in the way of a volley by Young who was heading for the back of the net.
It had been a magnificent first half, certainly the best I;ve seen this season.
St John put Hateley through with a lovely pass immediately on the restart and Hateley hit it well enough from an angle but straight at Mulhearn.
Bell had a glorious chance but was robbed by a brilliant interception by Byrne, and with Smith as ever the great Liverpool driving force, the Reds were fighting off the City raids and setting up great attacks of their own.
Liverpool took the lead amid incredible scenes of enthusiasm from the fans five minutes after half time, thanks to brilliant work by Callaghan and Thompson.
Callaghan picked up St John’s pass in his own half, raced down the middle and passed to Thompson, whose cross beat Mulhearn in the air, struck the face of the crossbar and bounced outto Hunt, who turned it over the line from a couple of yards range.
Liverpool were really showing their best form now, and City, on defence, did not really look anything like as good as a side as they had in the first half.
City were now only seen in isolated raids, although they were always dangerous.
Coleman and Young did well down the left, and Coleman’s centre was snatched from under the bar by Lawrence.
The incident-a-minute pattern continued and Hunt did exceptionally well to collect a throw-in from the right and work his way in towards goal. His snap shot almost surprised Mulhearn, who had to dive and save at the foot of the post.
After 62 minutes Summerbee, who had been limping, went off and Kennedy substituted.
It was all now Liverpool. Helped by a bit of luck they withstood the City’s first half barrage and were now controlling the game to their own tactical pattern. With Liverpool so much on top it was a complete shock when Lee broke away and scored a brilliant individual goal for City’s equaliser after 73 minutes.
There was no apparent danger when Hughes went up to intercept a long clearance, but he headed the ball instead of out of play, straight to the feet of Lee. The City winger took it on into the penalty area, side-stepped Byrne’s tackle, and drove the ball just inside the post past the diving Lawrence.
Heslop came up for a City free kick and almost scored when he drove a low shot through a packed goalmouth, Lawrence diving at the last moment to save.
Lawrence was injured saving at the feet of Lee, after Doyle had driven the ball in from a breakaway which could easily have brought City the winning.
MICHAEL CHARTERS WRITING IN THE LIVERPOOL ECHO 16TH DECEMBER 1967