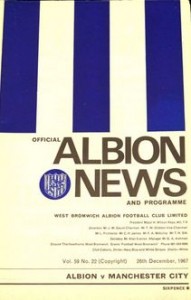 When Jeff Astle drove in the Albion winner with less than three minutes to go, he set the seal on the most thrilling game seen at The Hawthorns this season, a match watched by 45,074 spectators, a ground record since the building of the Rainbow Stand reduced the terrace capacity more than two years ago.
It was an intensely physical match. Both substitutes came on and several players on both sides limped off at the end. The defensive tackling was relentless.
It was a game of speed and spectacular improvisation with dedicated running off the ball to supplement the intelligent midfield work of the two most improved sides in the First Division this season.
Alan Ashman’s Albion have now achieved a consistency not seen at The Hawthorns for a decade.
… Joe Mercer’s Manchester City were lying second in the table when the game kicked off and their power and flair were revealed by the way they pulled back a 2-0 half-time deficit and forced Albion to fight all the way for the winner.
Astle captured the crowd’s acclaim with his two well taken goals, but the real architect of victory was once again schemer Bobby Hope, given far more room in which to move than he got from Southampton’s Gabriel on Saturday.
… Hope was full of guile, kept Albion moving from an early stage, and it was his well directed 28th minute corner that Astle converted to put them ahead.
It was, for my money, goalkeeper Mulhearn’s ball, but centre half Heslop went for it, in the confusion Astle towered high over Heslop’s shoulder to nod in a brilliant goal.
Nine minutes later Brown put Albion two up. the result of a Hope cross to which Krzywicki got his head.
Albion slackened a little and Francis Lee sent in a superb wing shot which whistled a foot over the crossbar. In the last minute of the half Albion winger Doug Fraser got his name in referee Spittle’s book for a foul on Stan Horne.
Substitute Roy Cheetham came on for City winger Tony Coleman at half-time.
In 50 minutes Dick Krzywicki had a powerful shot saved by Mulhearn, but the tide was turning City’s way. Lee sent away by Cheetham, put them back in the game in 60 minutes with an oblique shot which goalkeeper John Osborne should have had covered. As it was, he knocked it one-handed against an upright and it deflected into the net.
Centre forward Mike Summerbee, who was always threatening, got the equaliser from close range following a Stan Bowles cross with a quarter of an hour to go.
At this moment, substitute Graham Lovett was waiting for the referee’s nod to go on in place of the limping Clive Clark. This was a piquant moment because a year and two days previously, Lovett had broken his neck in a car crash and this was his first appearance in a senior game.
City battled for the winner and a Heslop header was half saved by Osborne and then cleared of the line by Williams. Then the Albion net broke and we had the sight of linesman Gale from Shrewsbury being hoisted on Osborne’s shoulders while he repaired the rigging.
Back to the game after three minutes delay and Lovett made this almost a Boys’ Own Paper comeback story when he hit a Manchester upright and John Kaye dived in to head the rebound over the crossbar.
In the 88th minute Astle was on the mark again, crowning a Hope-Brown move on the right with a neat goal.
In the dying seconds Summerbee and Williams clashed angrily. The referee spoke long to the City centre forward, whose retaliation had been very obvious, but he did not book him.
GRON WILLIAMS WRITING IN THE BIRMINGHAM POST 27TH DECEMBER 1967