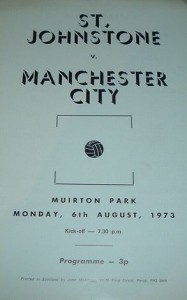 A header from Rodney Marsh, racing from outside the penalty box to meet a perfectly flighted cross from the touchline by Mike Summerbee, clinched this win in the 11th minute. From that point City had command and never looked like surrendering it.
Colin Bell, back in the team and replacing Tony Towers, who will miss the start of the season because of a F,A. suspension, hit the woodwork as more chances developed.
Performances catching the eye came again from Marsh, working hard and skilfully, and Mike Doyle, tigerish in defence until a back injury caused him to be replaced in the second half by Glyn Pardoe. His wing half partner Alan Oakes, covered enormous amount of ground, too.
FROM THE CITY PROGRAMME 18TH AUGUST 1973