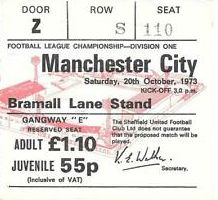 For City’s visit the south side of the ground took on an eerie feel as the first section of the new South Stand was being constructed on the land between the pavilion and the football pitch.
For City, the boardroom takeover battle was finally over after three unsettling years, however the club was still to find its feet under new Chairman Peter Swales. He had only been in office for fifteen days and was keen to make his mark. Former fifties player Johnny Hart was the manager. He had been given the job when Malcolm Allison resigned in March.
On the pitch Hart’s side managed only four victories in their opening eleven matches, with the most worrying aspect of this period being the fact the Blues were struggling to find a goalkeeper worthy of a First Division place. Joe Corrigan had been dropped after a few embarrassing displays and much abuse from the media and some supporters, while his replacement Ron Healey was similarly pilloried. Drastic measures were needed and Hart signed Keith MacRae, a 22 year old Scot from Motherwell. The fee of £100,000 was a record for a British `keeper, and much was expected when he made his debut at Bramall Lane.
Sadly, Oldham born Bill Dearden netted for the Blades
in only the second minute of the match. However things quickly turned around. Denis Law, who had rejoined the Blues on a free transfer in July had a couple of chances to equalise shortly afterwards. He eventually did get his name on the scoresheet as the Blues ended 2-1 winners. The other goal came from Bill Dearden who put the ball into his own net to cancel out his initial strike.
From a Blades perspective the match was a huge disappointment, especially as they suffered their own goalkeeping crisis when Tom McAllister broke his leg and Alan Woodward had to go in the nets.
Afterwards Hart praised MacRae, his new signing: “It must have been an ordeal for the lad making his League debut with so many people reminding him that City’s goalkeeping situation was one of great controversy, but he came through it. He can only get better with the experience, and I sensed at Sheffield that the rest of the team felt a surge of confidence to have him in goal behind them.”
Hart did have a few encouraging words for Corrigan “My assurance to the player s that I will bring him back into the team if I feel there is a nee:: for his return. The future will now work itself out.”
FROM AN ARTICLE BY GARY JAMES FROM THE CITY PROGRAMME 16TH OCTOBER 2001