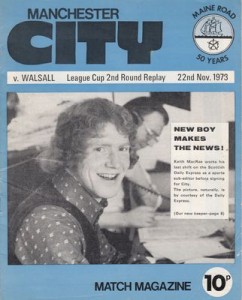 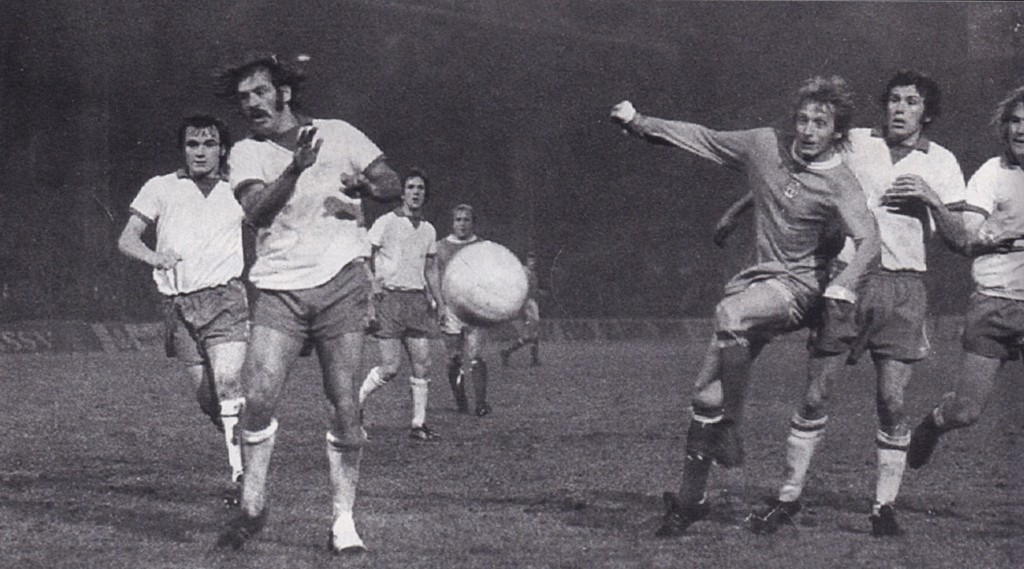 REPORT FROM THE BIRMINGHAM POST 23RD OCTOBER 1973
Magnificent Walsall took Manchester City to a second replay when they coolly held the star-spangled First Division side at Maine Road last night.
The Fellows Park men, whose 2,000 fans in the crowd often drowned the home supporters with their cheering, never gave an inch and thoroughly deserved to draw.
Although often forced on the defensive, they covered each other superbly and City were given few opportunities of a direct shot at goal.
Walsall had two players booked and Manchester City one in a rugged Cup tie of 62 fouls, fairly evenly shared.
Stan Bennett had his name taken in the 56th minute, apparently for a remark, and Bernie Wright was booked ten minutes into extra time for a foul on book.
City’s Denis Law had his name taken in the second period of extra time when he disputed a decision.
The match had an explosive start, with Wright being penalised for a tackle om Rodney Marsh who crumpled to the ground holding his ankle.
Two minutes later Marsh again nose-dived when tackled by Eric Young, the midfield man on loan to Walsall from City’s neighbours, Manchester United.
That proved the last straw for the talented Marsh who limped around for a while before going off in the 16th minute and being replaced by assistant manager Tony Book.
But it was already obvious that Third Division Walsall were no pushovers.
Walsall broke cleverly out of defence, using Shinton, Wright and Buckley effectively as front runners and City could never really relax in front of goalkeeper Keith MacRae who was making his home debut.
Walsall’s goalkeeper, Kearns, made one particularly fine save in the 36th minute, blocking a point blank header from Law.
Walsall certainly had their chances, particularly in the 53rd minute, as Doyle miss-kicked, letting in Buckley who ran on alone through the middle but shot too quickly and MacRae saved easily.
Lee headed against a post in the 74th minute, but Walsall came within a whisker of going through to a third round tie at Carlisle when, a minute from the end of normal time, skipper Doug Fraser, his ankle strapped after a tackle by Donachie, let fly with a drive which was deflected just the wrong side of the post.