From NEIL YOUNG, CATCH A FALLING STAR by Neil Young with Dante Friend
The ‘ballet on ice’ was a televised game against a fine Tottenham side that really brought us to the attention of the general public.

They were still sweeping the snow off the pitch until an hour before kick-off and the match itself was in doubt until just before kick-off time. Of cours these days they wouldn’t let teams play in those conditions, mind you, things would never get so bad what with undersoil heating and the like. In the 60s we played on pitches that resembled those you’d find in a park; we were used to playing knee deep in mud but the ice that day was unbelievable.
Boots were not inspected by the referee in those days so we stuck little nails in our studs to help us retain some grip on the ice, yet we were still slipping about even with them in. I think we managed to cope better with the conditions than Spurs although they scored first.
I’ve watched a copy of that video many times since and you know, I was unlucky not to have scored four goals! I scored one, then I hit the right post, the left post and the bar. Even Kenneth Wolstenholme in his commentary made a point about it “This boy Young” he said “there’s only two posts in a set of goals and he’s hit them both!”
I remember falling over when we had to stop and turn and the longer the game went on the more slippery the conditions became.
The final winning margin could have been far greater had it not been for their magnificent keeper, Pat Jennings. Our passing was superb that day, anybody who was there or anybody who played in that game will never forget it. TV VIEWERS TREATED TO A ‘BALLET ON ICE’ For a while the wintry conditions suggested the game would be off. However, with the BBC cameras at the ground for Maine Road’s first Match Of The Day game of the season the club put significant effort into ensuring the match was played.
Both sides wanted to play but City seemed the more determined. The players came out 20 minutes before the start of the game to get the feel of the snow covered surface.
When the match started several players struggled at first. Neil Young had to grip on to Alan Mullery’s shirt to stop himself from falling, while the conditions played their part when George Heslop chopped down Tottenham’s Frank Saul a few yards outside the penalty area. Terry Venables took the free-kick. It rebounded off the City wall and fell loose to Jimmy Greaves, who slotted the ball into the net wide of Ken Mulhearn’s right hand.
At 1-0 down it looked difficult for City, especially when the snow started falling again,
but by the 17th minute the Blues had mastered the conditions and after a Mullery clearance, Colin Bell latched on to the loose ball and firmly rammed it home. Journalist Peter Gardner felt this was the defining moment and believed the two sides were reacting to the conditions in different ways: “Spurs were skidding and slithering in all directions as City, with complete disregard for the conditions, flowed through in fine style. Young pumped the ball through for Lee to shoot on the run. It was well wide – but City in this mood looked ready for more goals.”
City’s pressure continued, but despite some glorious football they could not take the lead, and at half-time the game remained 1-1. In the 50th minute the Blues did find the net. Mike Doyle dispossessed Cliff Jones and pushed the ball forward to Neil Young. Young centred to Mike Summerbee, who then headed past a clutching Pat Jennings to give City the lead. 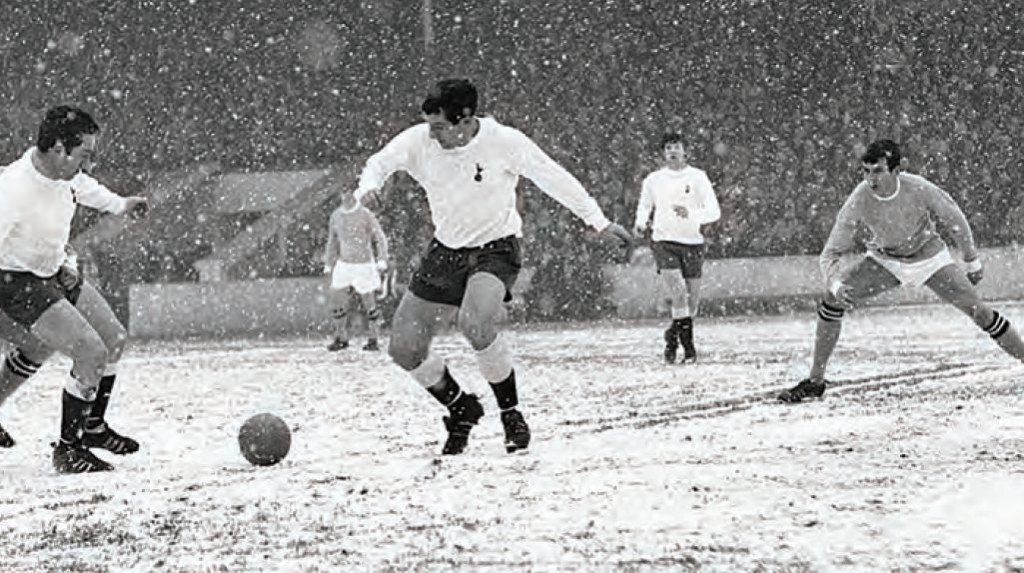 Two minutes later Young hit the bar, then Bell headed over. Jennings performed brilliantly as City tore through the Spurs defence time and time again. In the 64th minute Summerbee passed for Francis Lee to shoot, but the ball hit the foot of the far post and bounced out. Tony Coleman followed up and gave City a 3-1 lead. Eleven minutes later Young made it four.
Further attempts followed but the score remained 4-1. At the end of the game supporters queued for copies of the MEN Pink where they read: “Where do you find the superlatives to describe the achievements of this brilliant, exciting and breath-taking City side? The Blues again scaled tremendous heights to outclass Spurs on a treacherous ice and snow-bound Maine Road pitch.,” The article ended with: “No one played badly in this magnificent City side. City could quite easily have won by double the margin. Yes they really were that great.”
The newspaper also announced that the game would be on Match Of The Day that night (the unusual sight of cameras at Maine Road had given it away!), and that night millions of viewers watched. City received letters from all over the UK in the days that followed saying how wonderful the game was, and how much they wanted City to win the title. This game really did change attitudes to the club and suddenly brought City’s title ambitions to a national audience.
From Gary James’ Season Tracker, City programme 18th December 2007