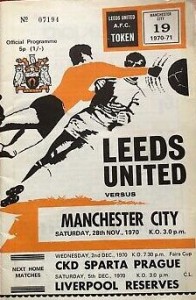 Ref A Diamond – replaced by D Harwood after 40 minutes If City thought they had a chance of winning the league then this match would extinguish those aspirations as League leaders Leeds United went eleven points clear of the Blues.
City fought for their lives to get something from the game, however the single goal victory for the Yorkshire men could have been much higher, Peter Lorimer hit a post, Johnny Giles missed a penalty after Tony Book recklessly brought down Terry Cooper, and then Joe Corrigan pulled off some great saves to give the Blues a chance until the final whistle.
On the occasions City did get forward Gary Sprake was also in great form for Leeds. The goal that settled the game came in the second half, Corrigan kicked from his hands but Madeley won the header on the half-way line, the ball looping over the City defence, even so it should have been easy for Heslop to shepherd the ball out of play, however Lorimer chased it down and some how pulled it back from the bye-line for Clarke to score from ten yards.
For the record Mr Diamond the referee had to be stretchered from the pitch after a muscle problem late in the first half, and was replaced by linesman Mr Harwood.