JAMES HOLLAND WRITING IN THE GUARDIAN 7TH DECEMBER 1970
Arsenal beat Manchester City on Saturday at Maine Road, thereby inﬂicting on City their ﬁrst home defeat this season and at the same time gaining a point on Leeds United, the League leaders, in the ﬁght tor the First Division title,
It is to be hoped that City have a good run in the FA Cup competition and then the extra money brought in can be used, not for buying new players, but for improving the pitch. On Saturday it was a disgrace to any self respecting senior club. What would have been a ﬁrst class match was reduced almost to a farce by a glutinous quagmire. Even so, the players managed to give worthwhile entertainment and they deserved all praise for their efforts. Viewed from most aspects. defeat was an unjust tum of events for City who were treated servilely by fate, or luck, which ever you prefer to call it. In the ninth minute Heslop withdrew with a dislocated right shoulder. Just before the interval Doyle limped off because of an injury to an ankle, came back, and went off again. He turned out for the second half and struggled along manfully at centre forward. In spite of all this City played spiritedly throughout and for long periods Arsenal were on the defensive. Soundly bolstered up by McLintock and Simpson, however. Arsenal gave nothing away, while any shots City did get in were dealt with competently by the agile Wilson. The manner in which he rolled over and over after gathering the ball prompted the thought that he must be about the most acrobatic goalkeeper in the business. In the seventy fourth minute, one more City raid foundered on the Arsenal bastion, Arsenal broke away on the right and forced a corner. Corrigan dropped the ball from Sammels’ corner kick, City’s defenders got themselves in a tangle, a shot struck one of them. and the ball rebounded to Armstrong who lobbed it over their heads and into the untenanted goal. More hard striving by City followed, but with about a minute to go Arsenal broke away again. Armstrong’s centre was headed out by Book straight to Radford, who headed the ball neatly past Corrigan. Commiserate with City by all means, but give due credit to Arsenal, whose strength in defence is reﬂected by the fact that they have conceded only 15 goals in 20 league matches. 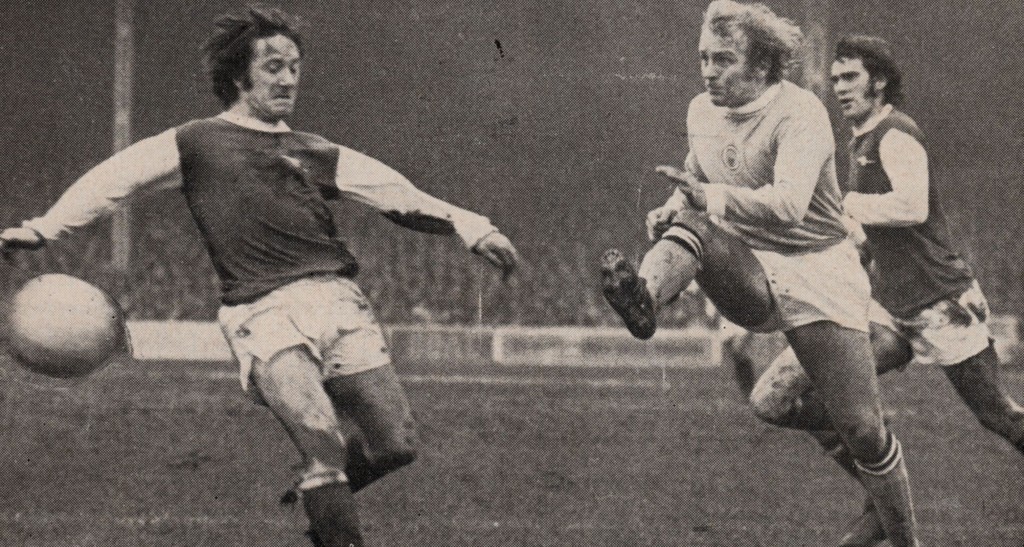