City were back in the big time after a fantastic promotion season the previous year and it would be an emotional season as it would be The Citizens last season at Maine Road before moving to their new home at the City of Manchester Stadium at Eastlands.
Kevin Keegan had bolstered the squad ready for the Premiership campaign. Nicolas Anelka joined in a record transfer deal for the Blues as City paid Paris St. Germain £13 Million for the French striker who had been on loan with Liverpool, he joined Sylvain Distin who had been signed in May 2002 in a £4 Million move also from Paris Saint Germain after being on loan at Newcastle.
Marc-Vivien Foe joined on a year long loan from Lyon, and ex United Keeper Peter Schmeichel joined City on a free, and another veteran keeper also came in, Tim Flowers who joined on a three month loan.
Three youngsters also joined the squad, striker Vicente Matias Vuoso came from Independiente for £4 Million, defender Mikkel Bischoff was a £750,000 capture from AB Copenhagen, Tyrone Loran also a defender moved to Eastlands from Volendam for £250,000.
There were no major moves away from Maine Road, Tyrone Mears moved to Preston for £150,000 and Chris Killen moved to Oldham for a figure around £100,000
Pre-season saw a round robin one day tournament in Denmark. City played two 45 minute games, the first a 0-0 draw against Silkeborg, who then beat the Blues in an American style shoot-out.
A 2-0 win against hosts Aarhus meant that City won the one day tournemant on goal difference.
Staying in Denmark City beat Sonderjylland 4-1, before returning to Blighty for a testimonial for Ryan Kidd at Preston which Keegan’s team won 3-1.
One day later an entertaining friendly saw City beat Bury 4-3 before a prestigeous friendly in Hamburg which The Blues lost 1-0.
Thirteen goals in two games followed, 6-0 at Rochdale and 7-1 at Tranmere in Eric Nixon’s testimonial where trialist Karim Kerkar scored twice.
Ali Benarbia was the new team captain as City opened their Premiership campaign at Leeds but despite a good display they were well beaten 3-0. The first home game in the Premiership saw a good 1-0 win over Newcastle however City’s notorious bad away form returned as they lost 1-0 at Aston Villa .
Nicolas Anelka grabbed his first League goals for City, scoring a brace in a 3-1 win over Everton at Maine Road.
It was three defeats on the trot away from home, Keegan’s team losing 2-1 at Arsenal , then two draws, 2-2 at home to Blackburn and 0-0 at West Ham left City in 14th place in the league with 8 points from 7 games.
A first defeat at home followed 3-0 to Liverpool. Away from the league The Blues squeezed through to the 3rd Round of the Worthington Cup with a 3-2 home victory over Crewe Alexandra , but back in the league they lost again 2-0 at Southampton and then 3-0 against Chelsea at Maine Road. The Blues had now only taken 2 points from the last possible 18 and Keegan’s team certainly needed a win.
Having not won away all season it was certainly a fillip as City won their next two games on their travels to the Midlands, 2-0 at Birmingham and 2-1 at West Brom, however a trip to Wigan in the 3rd Round of the Worthington Cup saw City knocked out of the competition in a 1-0 defeat.
The last derby at Maine Road proved to be an unforgettable affair with Shaun Goater grabbing a brace in a 3-1 victory over Manchester United. City were now mid-table after 13 games on 17 points.
The Blues couldn’t carry over the euphoria of the derby victory as they lost their next home game 1-0 to Charlton and then lost 3-1 at Middlesbrough.
Back to winning ways at Maine Road as The Blues beat Bolton 2-0 and then an emphatic 3-0 win at Sunderland, was followed by a 2-2 draw at Charlton left City going into the Christmas period in 12th position in the league on 24 points. Terry Dunfield then left Maine Road, joining Bury where he had had a loan spell earlier.
Tottenham beat City 3-2,then on Boxing Day The Blues beat Aston Villa 3-1 both games at Maine Road.
two good away performances saw a 1-0 win at Fulham and then on New Years day a 2-2 draw at Everton . The red half of Merseyside visited Maine Road in the FA Cup 3rd Round and it was Liverpool who took the honours with a 1-0 win. Kevin Keegan then brought in midfielder Djamel Belmadi on loan for the rest of the season from Marseille.
The Kippax was treated to a goal of the season candidate as Niclas Jensen hit an unstoppable volley in a 2-1 win over Leeds. Away from home City lost 2-0 to Newcastle but back at Maine Road they beat Fulham 4-1 to move into 9th position in the table just 5 points off a European place after 25 games. The transfer window saw French defender David Sommeil join The Blues and then after protracted negotiations Robbie Fowler joined City from Leeds on 30th January and made his debut two days later in a 2-1 defeat against West Brom at Maine Road. The Blues then drew 1-1 with Manchester United at Old Trafford.
Any chances of securing a European place were extinguished as City lost four of their next five games. A 5-1 humiliation at Maine Road by leaders Arsenal started the run, then a 1-0 defeat at Blackburn, and although Keegan’s team managed a 1-0 win at Maine Road against Birmingham, they were then trounced 5-0 at Chelsea and then 2-0 at Bolton. With six matches left City were twelth with nothing to play for.
The Blues then managed to stop the rot with 0-0 draw at home to Middlesbrough , followed by two wins, 2-0 at Tottenham and 3-0 against Sunderland at Maine Road.
West Ham then beat City at Maine Road and then in the penultimate game of the season The Blues had a memorable 2-1 win at Liverpool. 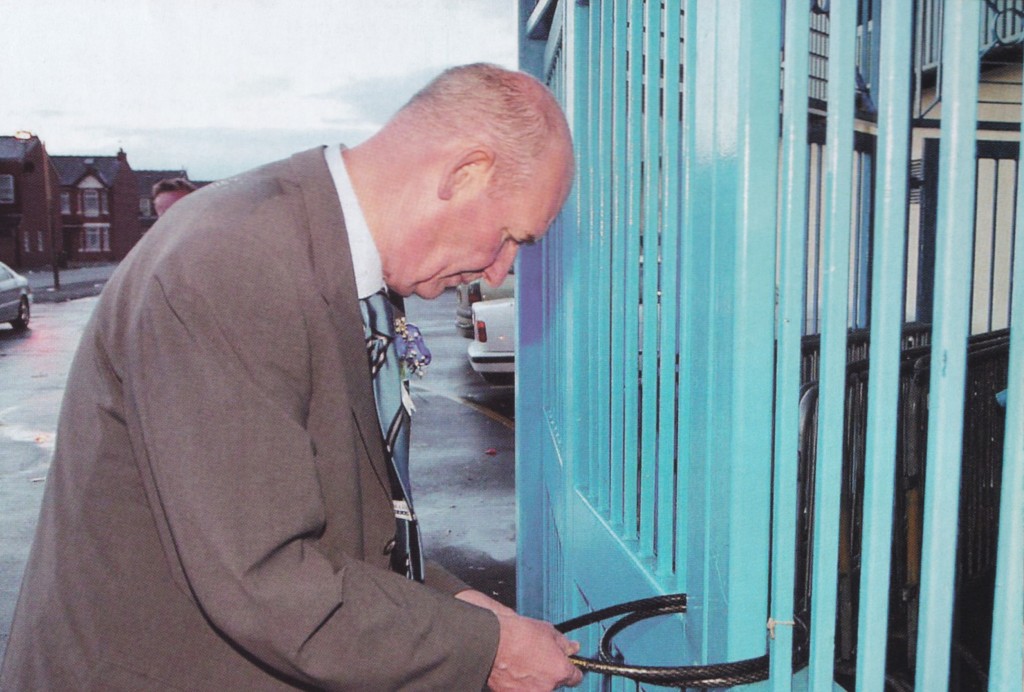 On the day that Maine Road, home to City for 80 years, closed the doors for the last time it was clear that Southampton hadn’t read the script as they beat the Blues 1-0. In an emotional day for all City fans. It would be a planned farewell to Peter Schmeichel however tragically the Maine Road crowd did not realise it would be the final time they would see Marc-Vivien Foe. On Thursday 26th June 2003 the world was stunned by the death of Marc-Vivien Foe who collapsed and died whilst playing for Cameroon. Sylvain Distin was voted City’s player of the season. With Shaun Wright-Phillips picking up the Young Player of the Year award for the fourth year in a row.