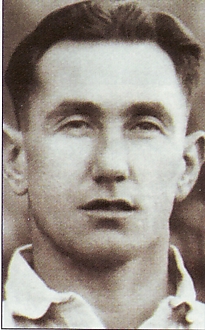 Albert was born in Grimsby on 26th December 1917. He joined City from Scunthorpe United in March 1937 as a 19 year old and just as he was establishing himself at inside right in the first team his career was interrupted by the World War II when he joined the Navy. He still managed to play over 40 times for City during the War when he was on leave. He stayed at Maine Road until 1951, having played 144 times (not including matches played in the war which were not classed as full competitive games) and scored one goal.
He then joined Stockport for £1,000, and finished his career in non-league football at Northwich Victoria and then Preston Cables. Once he’d hung up his boots he spent some time as a trainer at Rochdale in the 60’s.
He passed away in 1997.