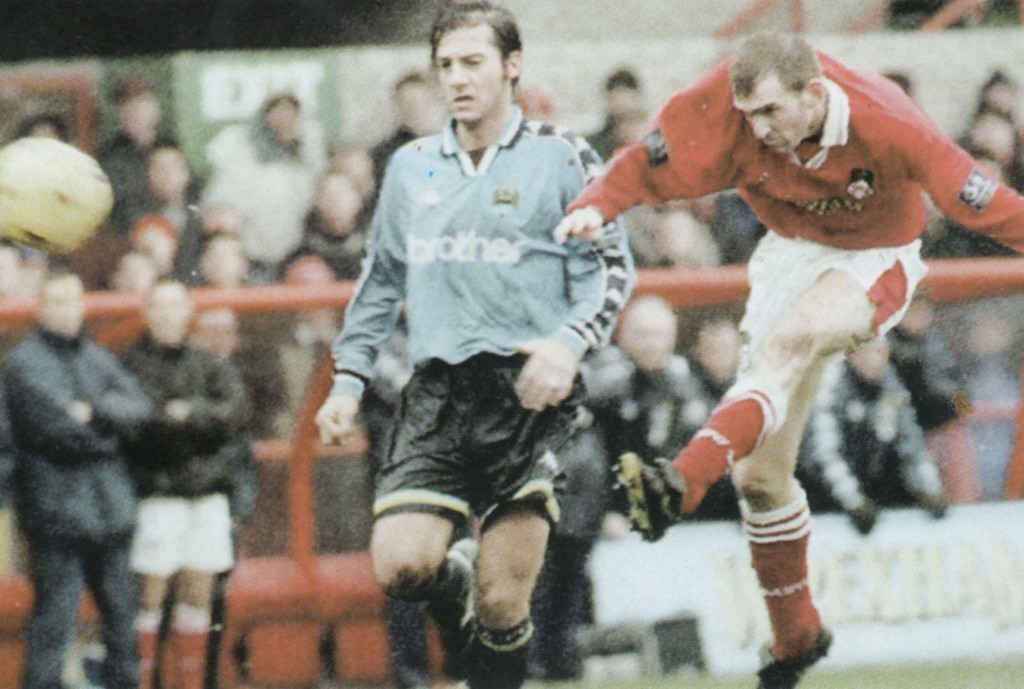 When a ‘big’ club falls on hard times, it can be very difficult for their supporters to come to terms with lower league football. Manchester City found themselves in such a situation
…Stuck in mid-table in the third tier of English football, they arrived at the Racecourse on Boxing Day desperate to reinvigorate their season. What followed over the course of the next 90 minutes will be fresh in the minds of every City fan present that day. Under siege for the vast majority of the game, only a brilliant display by goalkeeper Nicky Weaver prevented Wrexham’s rampant forwards from breaking the deadlock before a second-half goal from Dutch defender Gerard Wiekens sealed the three points.
…The Manchester Evening News report on the game pulled no punches: ”Apart from three towering performances, City had absolutely no right to take anything from this do-or-die encounter.
In fact without Gerard Wiekens, Michael Brown and Nick Weaver, the visitors would have been buried without a trace.”  With regular centre-back Andy Morrison sidelined by flu, Tony Vaughan was drafted in as a late replacement but struggled to fill the void. Wiekens was left to plug the gap as Wrexham had the better  of the opening exchanges. Former City winger Terry Cooke was causing Richard Edgehill constant problems on the right flank and from his cross Ian Rush came within a whisker of scoring his first goal for the Reds since his summer move from Newcastle United. Karl Connolly then saw a looping header just clear the bar before City responded with a rasping drive from Jamie Pollock that failed to trouble Mark Cartwright in the Wrexham goal. Cartwright had performed heroics when Wrexham drew 0-0 at Maine Road the previous August but this time he was little more than a spectator as his team-mates continued to dominate.
Dave Brammer was at the centre of many of the Reds’ best moves and on 38 minutes he produced a stunning volley which somehow Weaver managed to keep out.
Manager Joe Royle admitted that he gave his players a fierce dressing down at the interval and it was no surprise that City looked more lively after the break. The supply line to Cooke was halted and this gave the visitors some meaningful possession.
They got their reward on 56 minutes when Wiekens arrived late to power home a Kevin Horlock cross past Cartwright much to the delight of the 2,700 travelling fans. Wrexham’s response was swift with Weaver have to smartly deflect a Gareth Owen effort away for a corner from which Dean Spink saw his far post header crash into the side-netting with Weaver for once looking beaten.
The Reds last and best chance came when Rush put Martyn Chalk clean through on goal. Weaver kept his cool and forced the diminutive midfielder to fire directly at his legs when it seemed easier to score. ”We rode our luck and gave our worst display of the season,” reflected Royle after the final whistle. “In difficult conditions we enjoyed buckets of luck and had a magnificent goalkeeping display by Nick Weaver to thank for the win. Our reports had said that Wrexham are one of the better footballing sides in this division. They have the ability and the passing skills, but they do have problems in scoring goals, which I think we all saw today. ”I was not very happy with our first half display, but delighted not to be trailing at that stage. Overall Wrexham didn’t deserve to lose, but our goalkeeper came up big for us.”
EXTRACTS FROM MEMORY MATCH IN RED DRAGON NEWS 19TH JULY 2006