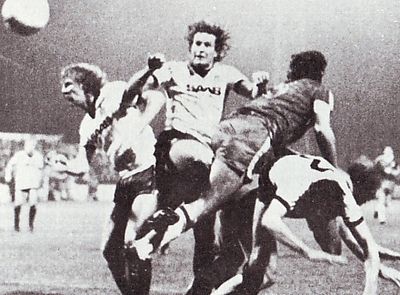 Wigan Athletic, who had rejoined the League three years earlier after having had a ten-year spell in the old Third Division (North) in the 1920s and `30s were the opposition.
The Blues expected a hard game when they travelled to Wigan, and the experienced home side made sure they got one. In their ranks were Larry Lloyd, ex-Liverpool and England; Archie Gemmill, holder of 43 Scottish caps; exEvertonian Eamonn O’Keefe; and many others who had hundreds of League games between them.
City welcomed back Dennis Tueart for his second full game of the campaign, having recovered from an Achilles tendon tear sustained the previous season, but he wouldn’t have welcomed the conditions. It drizzled throughout the game and the surface was very greasy.
City skipper Paul Power recalls the occasion. “Both teams had chances to go in
front in the first half, but Alex Williams had only a couple of saves to make. The nearest we came to scoring was from Dennis Tueart’s looping header, held under the bar by Roy Turks.
“In the second half we went in front when I found Kevin Reeves – who was playing a different role in midfield – and Dennis nipped in to score before Larry Lloyd could clear.
“Then they pulled one back with about ten minutes left. Tommy Caton went up to head away a clearance but Les Bradd challenged him and all Tommy could do was to head it past Alex:”
So the stage was set allsquare for the second leg.
ADAPTED FROM AN ARTICLE IN THE CITY PROGRAMME 4TH OCTOBER 1995 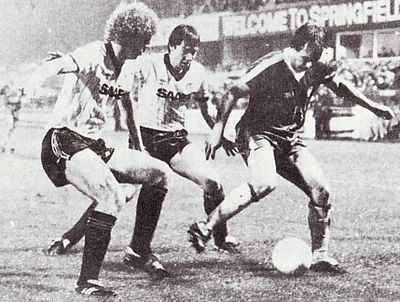