GRAHAM BAKER GRABS THE EQUALISER TO MAKE IT 1-1 An unexpected debut afternoon for winger Paul Simpson, then a 16 year old unknown, looked like a desperate gambler’s last throw by manager John Bond after he’d labelled his team’s previous two disp|ays as “diabolical”. But it turned out to be a fine afternoon for the home Blues, an adequate introduction by Simpson, and a treat of attacking football for the fans with 5 goals to enthuse about.
The match didn’t open with much room for optimism among the home faithful. Garry Thompson was a constant menace in the air against Kevin Bond and Tommy Caton, winning virtually everything Iofted up to him. In midfield Coventry took control quickly through Ernie Hunt and Manchester born Brian Roberts. 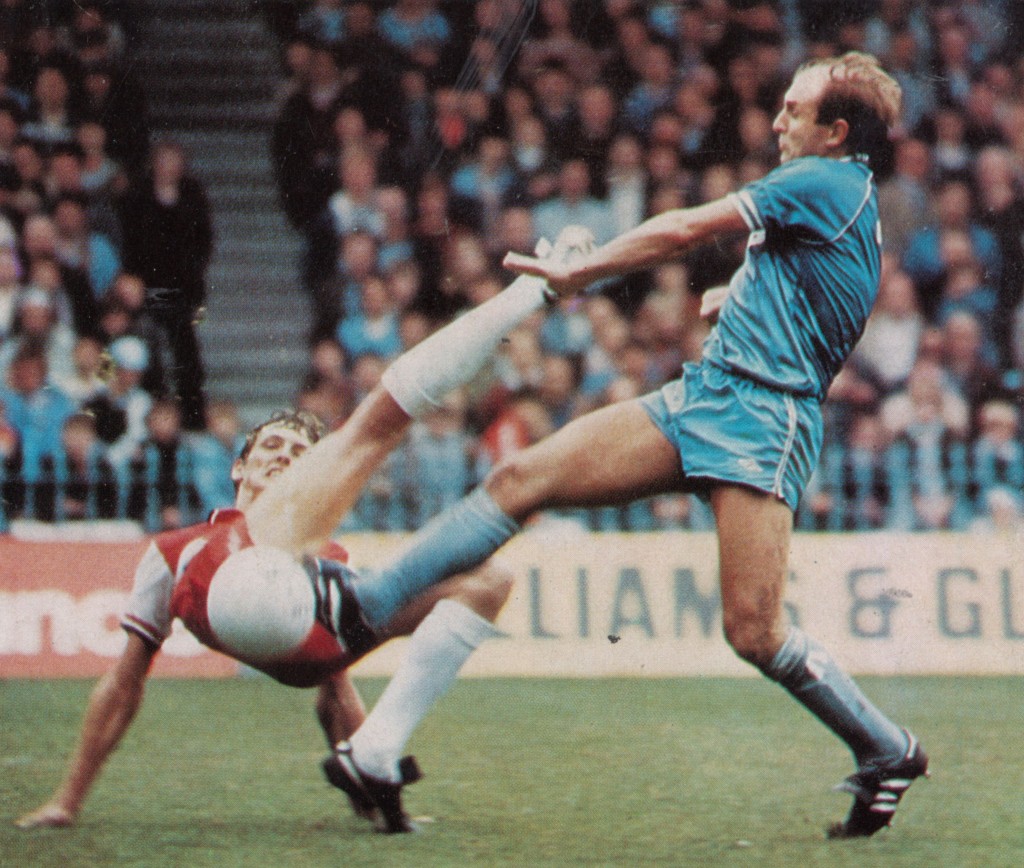 It was a third game in Coventry colours for Jim Melrose (signed from Leicester), buoyant after a hat-trick performance at Everton’s expense the previous Saturday. And Melrose, was quick to pounce. in th 7th minute Coventry raided with a Danny Thomas pass out wide to Roberts. The left back touched the ball inside to Melrose who side-footed past Alex Williams with ridiculous ease.
Although Coventry maintained control for the first half hour they failed to press home the advantage. And they were jolted in the 37th minute when City equalised through Graham Baker, converting a ball headed back across goal to him by Simpson, virtually the youngster’s first serious touch. Simpson had been on the spot to meet Ray Ranson’s long cross, the set-up for the goal. Baker was appropriate scorer since he tried to create and to score, a Ionelight in a dull display by the Blues.

Unimpressive City survived quite fortunately to the interval. And the turning point to be the 48th minute. Coventry’s eventual hero, ‘keeper Les Sealey, was judged to have gone one step too far. His infringement against the 4 step rule earned the Blues a free kick close to the penalty spot and Caton took advantage by lashing a winning shot through a wall of defenders.
Now the Blues were re-born and inspired by the midfield artistry of Asa Hartford suddenly coming to life. lt was all City from this stage and Hartford had a post shuddering with a shot from 30 yards with Sealey brilliantly saving the foilow-up attempt by Caton.
Simpson also wriggled clear of Thomas’s close attentions to whip a 60th minute cross-shot that had Sealey at full stretch while the ‘keeper also kept out a Kevin Reeves attempt. The visitors looked brittle in defence. So there was no surprise in the 71st minute when David Cross netted his third of the season (from 5 appearances) hooking home a delicate chip from Hartford.
It was when the home side eased up that Coventry came back into the picture. Williams parried out a Melrose shot and Thompson pounced on the ball to make it 3-2.
FROM AN ARTICLE PUBLISHED IN THE CITY PROGRAMME 14TH DECEMBER 1985 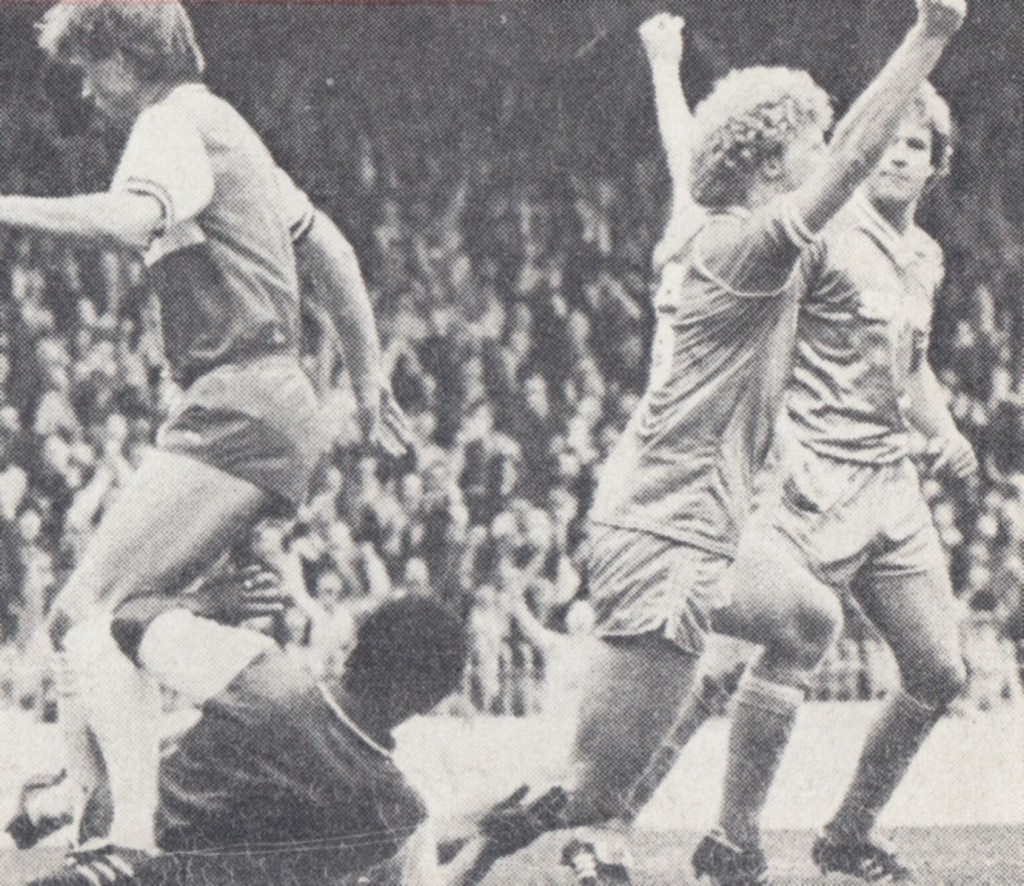 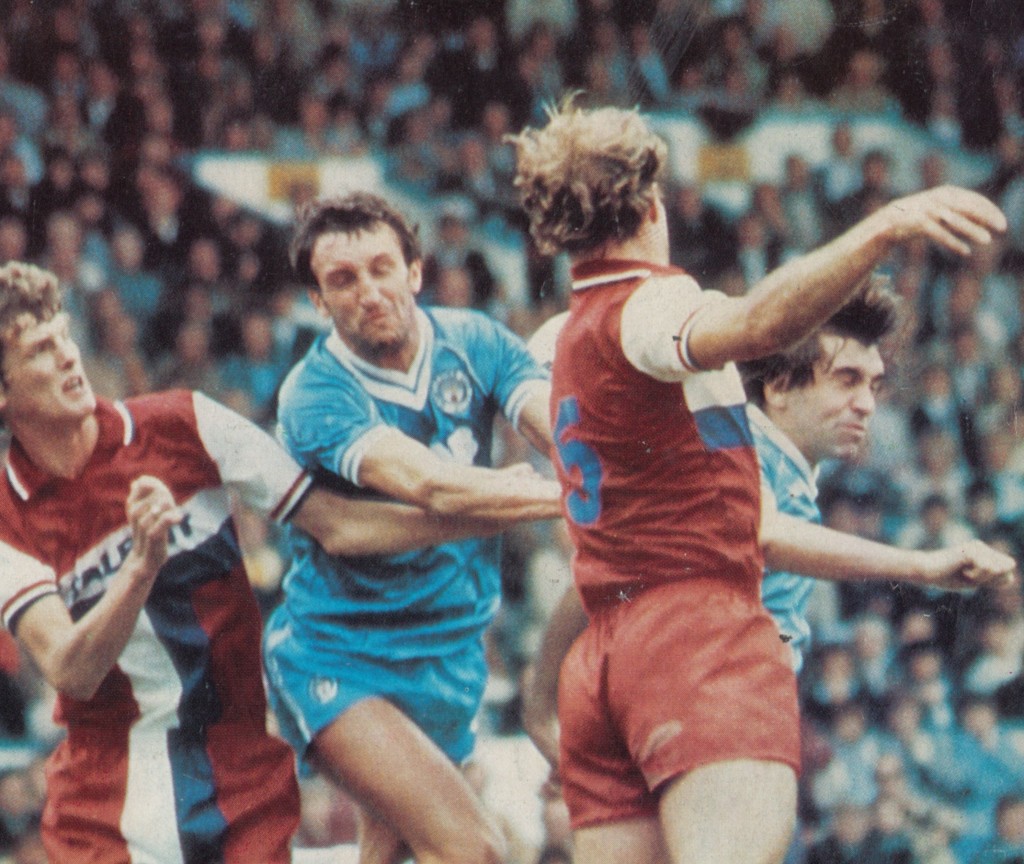 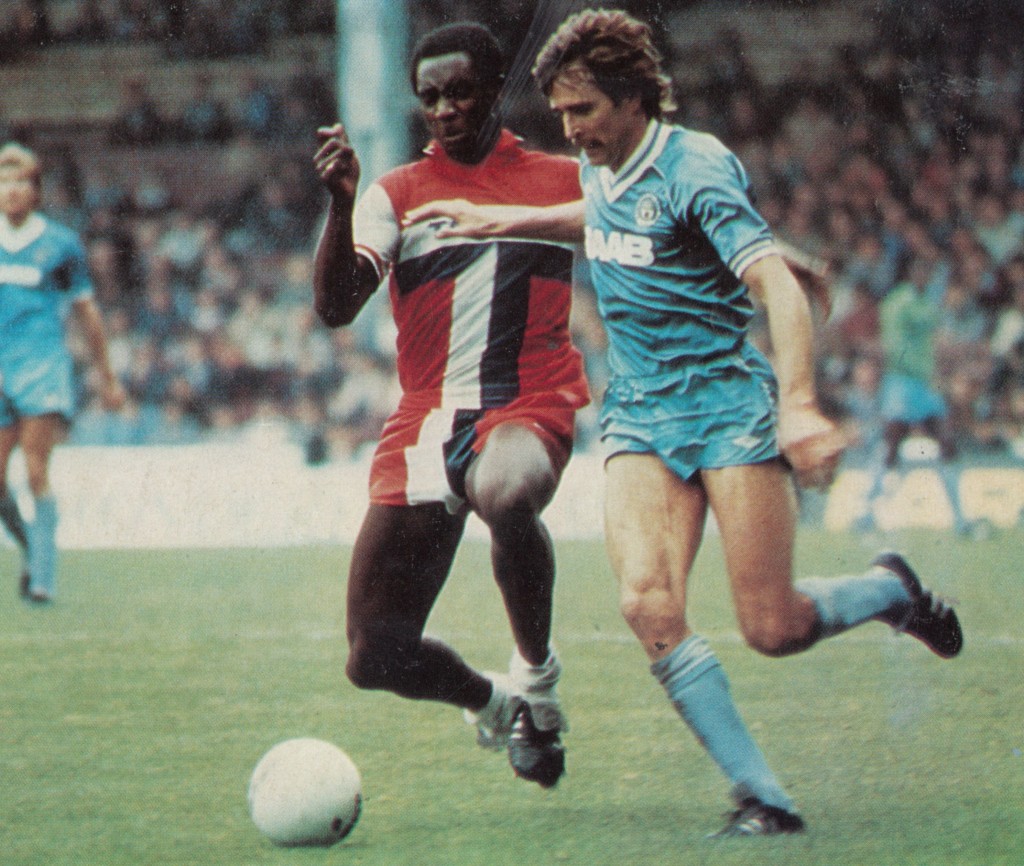