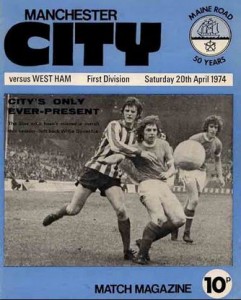 NOEL WILD WRITING IN THE SUNDAY MIRROR 21ST APRIL 1974
Manchester City, on any assessment of values, either zest, skills or shots, should have had this game sewn up by half-time.
Yet in the end they were made to struggle.
Book’s team scored two goals within the first sixteen minutes and with any luck at all could have had four before the break.
Booth headed a tonic goal from Summerbee’s cross in the third minute.
And Bell produced one of the best headers of the season to round off a Tueart dribble.
Law missed the sitter of his life from three yards, Day made a super save from Lee and City fired another half dozen shots against only two from West Ham in the first 45 minutes.
… But whatever manager Greenwood said to his sluggish team at that stage it worked.
West Ham suddenly burst into life.
McDowell and Best laid on a goal for Gould with his first shot of the match in the 50th minute. From that point City were struggling.
They survived many anxious moments, notably a fierce Best shot which thundered only inches wide of the right hand post.
And they had big Corrigan to thank for a splendid save, again with Best the sharpshooter.
Then Paddon drove a shot into the net only to have the effort controversially disallowed.