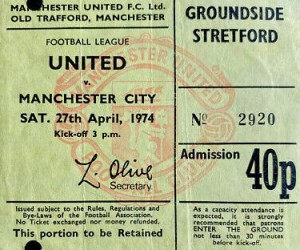 The game was abandoned shortly after Denis Law’s 82nd minute goal, however on May 3rd 1974 the League announced that the result will stand because the crowd invaded the pitch causing referee David Smith to terminate the game prematurely

“DENIS HAS DONE IT! ” (Gerald Sinstadt) 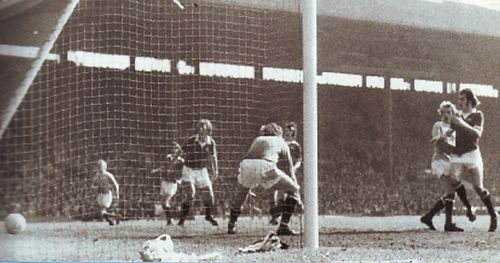 from RODNEY MARSH – PRICELESS, THE AUTOBIOGRAPHY
… Not long before the season ended, our game against Manchester United at Old Trafford turned into one of the most heated derby battles the city has ever seen, and a riot towards the end forced the match to be abandoned.
To avoid relegation, United had to win and one of their relegation rivals, Birmingham or West Ham, had to lose. With eight minutes to go, Denis Law cheekily back heeled the ball into the United net right in front of the fans who had once idolised him. It looked like he had condemned his former club to the second division.
At the time I had gone off with an injury and was sitting on the bench but I could clearly see that Denis’s face was ashen. He looked like he’d seen a ghost. He didn’t seem to know where he was and was wandering around in a confused state. I said to Tony Book, who was sitting next to me, “Get him off, Skip. He’s gone”.
Before we could get to him, hundreds of hooligans rushed on to the pitch to try to stop the game and force a replay. During the following chaos, the ref ordered us off. As it turned out, it wouldn’t have made any difference if United had beaten us because both Birmingham and West Ham won their games.
In the dressing room afterwards, Denis was as miserable as I’ve seen him. His goal hadn’t relegated United but he later told me that oly one other game had made him feel as bad and that was England winning the World Cup. JOE CORRIGAN TALKS ABOUT THE CROWD INVASION
Hooliganism was rife in English football and United fans had a reputation as bad as any club.
…It was goal-less with minutes left and I was down at the Stretford End so when Denis Law Backheeled the ball home in the most dramatic circumstances I knew what was coming.
The United fans poured onto the pitch and I was surrounded in seconds, but I knew the safest place for me was to stay in my goal. Nobody could get to me from the back and if they wanted to have a go they’d have to come at me from the front and from there I’d take my chances.
There were thousands of United fans on the pitch in a vain attempt to get the game abandoned. A few of them tried to attack me but eventually five or six policemen arrived and formed a circle around my goal before escorting back to the tunnel. It was a frightening experience and it could have been uglier.
In the end I was just happy to get back to the relative safety of the changing rooms. All the lads were there, except Denis, who had stripped off and was in the bath on his own lost in thought…
Adapted from Big Joe: The Joe Corrigan Story by Joe Corrigan and David Clayton