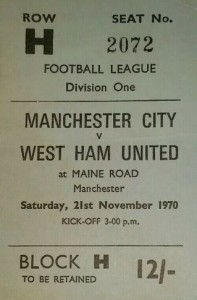 PETER GARDNER WRITING IN THE MANCHESTER EVENING NEWS 23RD NOVEMBER 1970
Even the referee stood back to applaud a player who stepped out of the shadows to carve for himself what could be a permanent niche in the Manchester City attacking set-up.
The hand of Dennis Corbett stretching out to pat Arthur Mann on the back provided a final and fitting accolade to one of the most devastating displays of left wing play seen at Maine Road for many a year.
… In 90 minutes of pace, punch and power £65,000 Mann threw down the gauntlet to his No. 11 predecessors with a “beat that then” challenge.
Freddie Hill and Neil Young now know all too clearly that the battle for the left flank job is no straight contest.
… However, I believe Mann could well emerge as more than an orthodox winger with an inbuilt ability to get down to the flag and pull back with old-fashioned and lethal accuracy.
He could be a utility man whose influence might stretch down the entire side of City’s left side providing cover in all positions.
… Mann’s effectiveness coincided with a superb link between Francis Lee and Colin Bell, who gave Bobby Moore a rare hiding by pushong up close on his England skipper.
And with Mike Summerbee also doing his stuff on the right, the game developed into a one-way barrage, with City deserving a better return than 2-0.
Lee scored both, and in the long stretch that separated his first, after nine minutes, and his second, 84 minutes, City created enough chances to have won by more than half dozen.
And it is no coincidence that most of them were created by Summerbee and Mann. But as modest Arthur said at the end; “I haven’t quite polished up on my shooting yet!”