It was a very professional performance by Joe Mercer’s men at White Hart Lane, their first visit to London since lifting the FA Cup at Wembley at the end of last season.
They defended well, when needed, and kept the Spurs defence on their toes throughout the 90 minutes. The first half saw only a few chances before City went ahead just before the whistle blew for half-time.
After 12 minutes Neil Young saw his low shot well saved by Jennings, then after 23 minutes a Gilzean flick on put Greaves through with only Joe Corrigan to beat.
A few minutes later Tottenham felt aggrieved a Roger Morgan looked to have headed them into the lead but the linesman flagged for, what looked a very tight offside decision.
Greaves also had the ball in the net, but this time from a more obvious offside position and the score stayed at 0-0. Just before the break, Young passed the ball outside to Colin Bell who clipped a great deep cross, to pick out an unmarked Ian Bowyer on the six yard box, who headed home gleefully for his sixth goal of the season.
The second half brought half chances for Summerbee and Greaves, and the Summerbee really should have put City 2-0 up, after great work by Lee on the right wing, he put in a great cross to find ‘Buzzer’ unmarked just 6 yards out, his header downwards towards the left hand post was brilliantly saved though, by Jennings. The Blues were now mounting attack after attack and Neil Young was unlucky to see his 20 yard shot smack off a post, the Francis Lee dribbled through the Spurs defence but his low drive was well saved by Jennings.
Eventually in the 88th minute City’s second goal arrived, Colin Bell picking the ball up halfway into the Spurs half, swept a pass outside to Neil Young on the left wing and then Bell sprinted into the box himself to meet Young’s cross and beat Jennings with a great header at the near post.
Alan Oakes grabbed City’s deserved third goal in the first minute of injury time, with a low shot from the edge of the eighteen yard box that seemed to deceive the Spurs’ keeper and ended up in the back of the net. 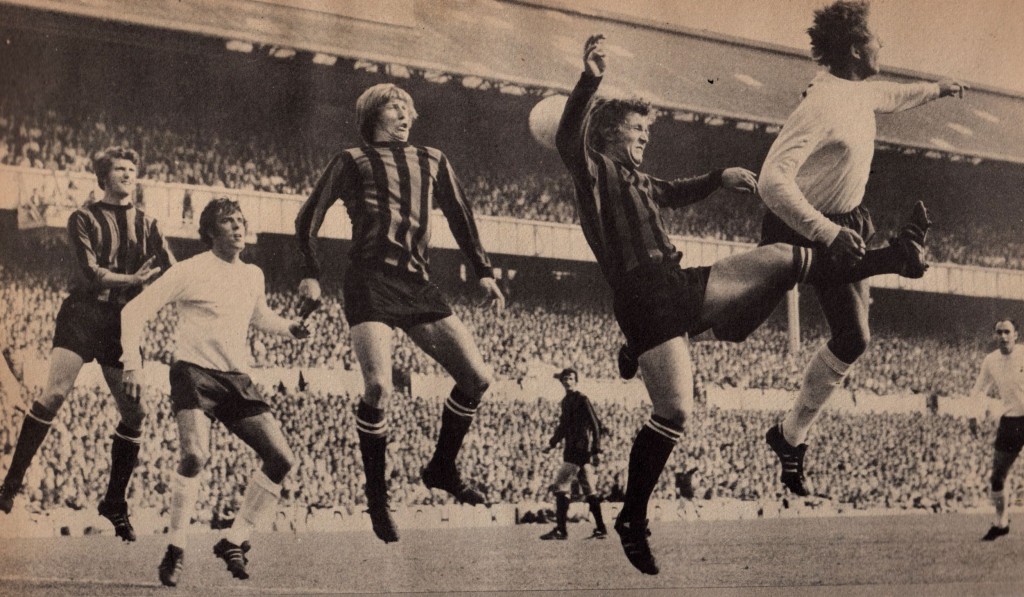