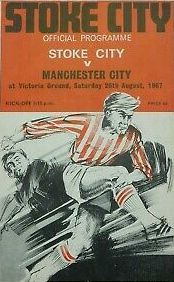 The scoreline told the story of the match, City spluttered and had few chances, although Summerbee did try hard to get things moving for The Citizens.
With Stoke in control of the game courtesy of a great performance in midfield by George Eastham, they took the lead just before the break with a header by Alan Bloor.
In the second half another header this time from Palmer put Stoke 2-0 up, and then Tony Book brought down Harry Burrows in the area and Burrows himself converted the subsequent spot-kick.