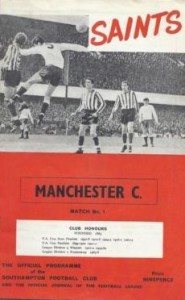 It looked like City might get there first win of the season as Tony Coleman despatched a Colin Bell cross to make it 1-0 to the Blues after just 3 minutes.
City’s celebrations were soon caught short as within a minute The Saints had equalised through a Ron Davies header and then just before the break Martin Chivers put the South Coast side 2-1 up.
Colin Bell equalised for City after some good work from Mike Summerbee, however The Blues travelled back to Manchester pointless as Ron Davies grabbed a late winner for Southampton with a shot which went in off the post.