A bright sunny day greeted the opening of the 1969-70 season… Let it be said immediately that City were magnificent. They outshone the visitors in every department, and the little threat that Wednesday offered was easily dealt with by Joe Corrigan.
Glyn Pardoe was hailed by one scribe as “the most cultured and artistic back in the business”, while Neil Young ended the 90 minutes being recommended for the England team, an honour which sadly was to elude him.
By 16 minutes past three o’clock, the Blues had seemingly done irreparable damage to the Wednesday cause. Young was
the marksman who brought their downfall as he flitted in and out of the Yorkshire ranks without hindrance.

His opening goal came after Tony Coleman and Mike Summerbee had linked up in devastating fashion, and his second was taken so skilfully and so powerfully that his name was voiced in the same breath as Di Stefano and Puskas.
After 33 minutes City went 3-0 in front. Young and Franny Lee performed a scissors movement, dragging Sheffield defenders all over the place. Young fired in a shot which Peter Springett kept out at the expense of a corner. Coleman took the kick and Mike Doyle’s header gave the unmarked Bell an opportunity at the far post.
From Wednesday’s attitude on the pitch when they reemerged after halftime, it would seem
that they had been threatened with a walk home over the Snake Pass if things did not improve.
Our old friend, Sam Ellis, was booked for bringing down Lee, then Peter Eustace joined him in the book for dissent, and with players of both sides mystified by some of the decisions, two penalties were awarded, one converted by Eustace for Wednesday and Francis Lee, who else? for City…
ADAPTED FROM ‘ONE TO REMEMBER’ IN THE CITY PROGRAMME 13TH APRIL 1996 FROM ROY OF THE ROVERS ANNUAL 1971 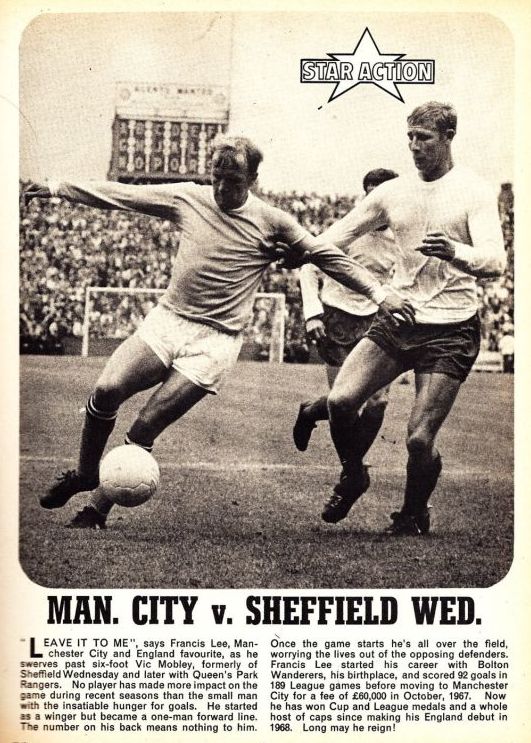