Northern Ireland international Kevin Horlock helped keep under-fire Manchester City manager Frank Clark in the Maine Road hotseat for at least another week with a last-gasp equaliser at Bramall Lane today.
The noose had appeared to be tightening even further around Clark’s neck, as City looked set to crash to their third straight defeat going into the dying seconds of their battle with division one promotion chasers Sheffield United.
Brian Deane’s superb 21st-minute strike had separated the teams, and it looked as if it was going to be enough to increase the pressure on Clark, who last week faced calls for his head following a shocking 1-0 defeat at home to Huddersfield.
But, with United goalkeeper Simon Tracey having had virtually nothing to do for the previous 89 minutes and 50 seconds, he was then forced to pick the ball out of the net following what was the last kick of the match.
City had looked the marginally better side throughout the second period, having been clearly outplayed during the first – but Tracey was never troubled as his defence did their job superbly.
Then, though, the ever dangerous Georgian international Georgi Kinkladze swung over a right wing cross and with the Blades back line nowhere to be seen for the first time on the day, Horlock stole in to steer the ball past Tracey from inside the six-yard box.
The goal will certainly ease the tension which Clark has been under during a run which has seen City plummet to their worst ever position in the club’s history. It was also a strike which ended the Manchester club’s barren run in front of the net – they had not found their way to goal in their previous three matches and in six of their last eight.
It would have been a clearly different story if United had taken their chances during that dominant first half, but all they had to show for their comfortable display was Deane’s seventh of the season.
It was United’s £1.5million club record signing who started the pressure rolling in the seventh minute when he let fly with a 25-yard right foot shot which forced City keeper Martyn Margetson into a low, smothering save to his right.

Seconds later a header from Welsh international Gareth Taylor was narrowly over the bar following a Mark Patterson cross and it was the midfielder who supplied again in the 16th minute, this time Carl Tiler swinging his left foot, but his shot was inches wide of the right hand post.
After Margetson had superbly cleared with a one handed punch off the head of the advancing Taylor following a Deane cross, there was little he could do to deny the striker two minutes later.
United skipper David Holdsworth floated a ball into the area which was at first held by Taylor before a neat lay back for Deane to fire in a right foot drive from the edge of the area past the rooted Margetson.
City skipper Kit Symons came close to heading into his own net in the 26th minute, before Kinkladze finally helped City break the United stranglehold as he set up two glorious chances within a minute.
First a delightful through ball into space behind the United defence sent Horlock clear, but an initial stumble led to him flashing an acute shot across the face of goal. 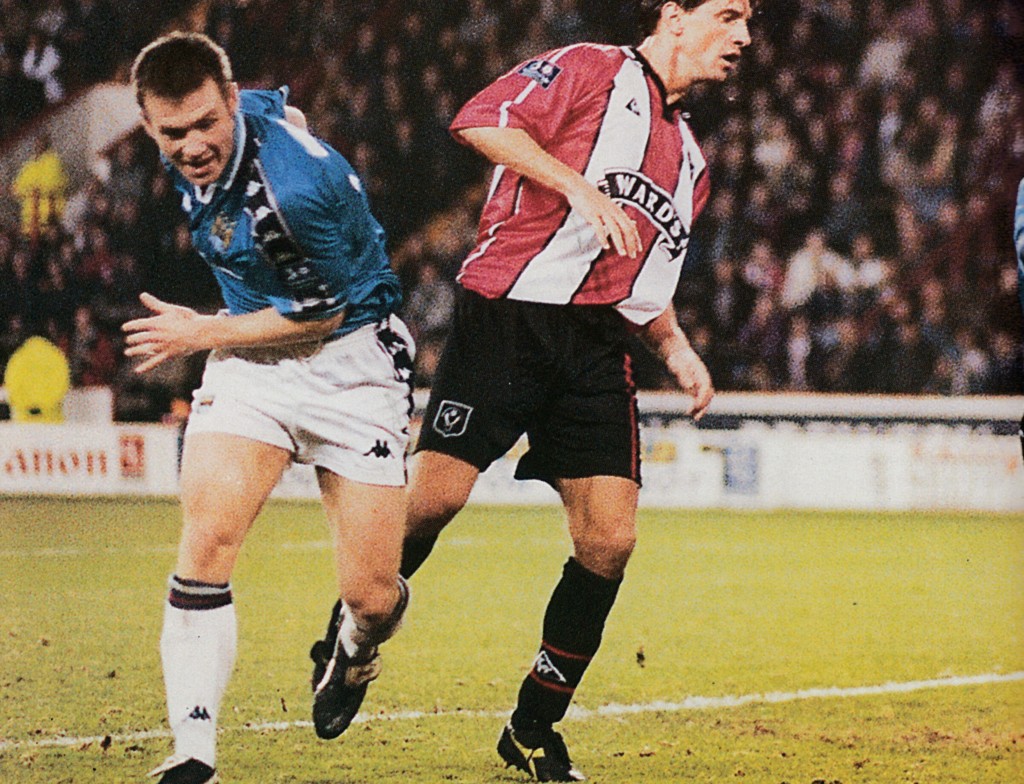 There was even more to come from Kinkladze within seconds as a jinking run followed by a neat flick sent Craig Russell in the clear.
Russell, involved in a swap deal on Thursday with Nicky Summerbee going to the Stadium of Light, found Tracey alert after his period of inactivity as the keeper blocked the shot at point blank range.
The second half proved to be an error strewn affair, but United should have wrapped up the points in the 61st minute with a delightful three man move.
Don Hutchison laid a through ball for Taylor, who in turn fed Deane, but his placed left foot curler from the edge of the area was superbly tipped away by Margetson.
A flurry of substitutions followed, with City playing the neater football across the midfield without finding a cutting edge around the box.
It wasn’t until Kinkladze swung in a desperation ball that City finally found the breakthrough courtesy of Horlock’s late, late finish.
IAN PARKES WRITING FOR THE SPORTING LIFE 16TH NOVEMBER 1997 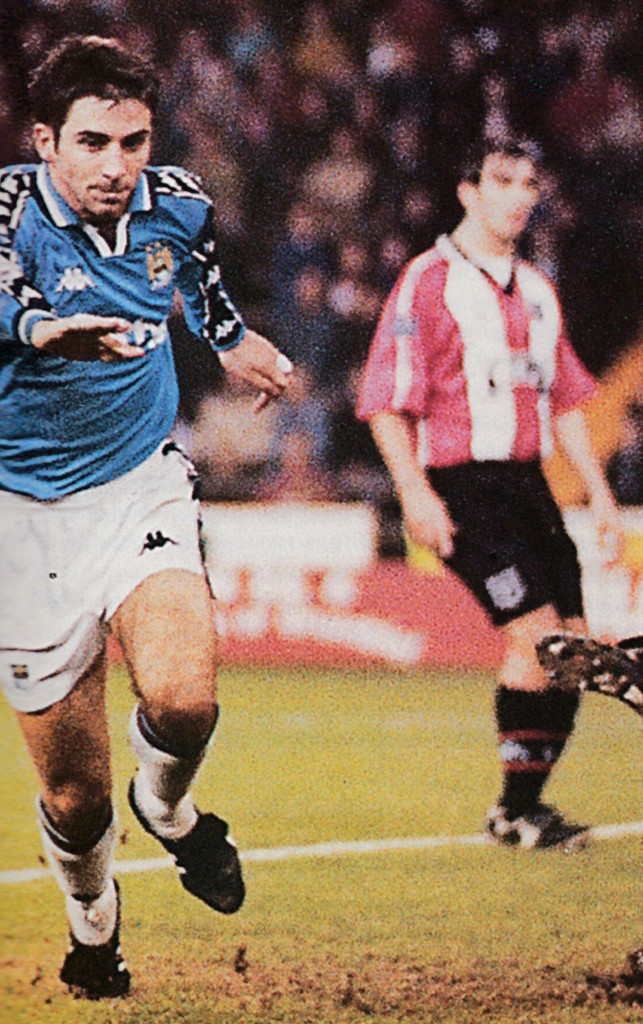