The dramatic semi-final victory over Ipswich Town is still a favourite game for many City supporters.
Many prefer the memory of a fantastic win at Villa Park to the constant referral to Ricky Villa’s match-winner in the final against Spurs
…With half of the Holte End full of City fans and half full of Ipswich, the game kicked off at 3pm on an overcast Saturday afternoon… and the East Anglians were soon on the attack. The Ipswich side, packed with quality, grace, talent.. and Alan Brazil, were riding high in the First Division table whilst John Bond’s side had recovered from near certain relegtion to a comfortable mid-table position.
…City struggled in the early minutes and the graceful Arnold Muhren presented Brazil with a sitter on 11 minutes but he contrived to miss the ball completely.
Tommy Hutchison then cleared a thunderous Kevin Beattie header off the line four minutes later as the Blues… grimly hung on. City began to battle back inspired by Gerry Gow who informed Franz Thijssen of his presence with a trademark crunching challenge that earned him a talking to by referee Pat Partridge.
Eric Gates… blasted the ball over from close rangeas Ipswich continued to spurn chances. Dave Bennett was scythed down by Beattie towards the break and Gow’s vicious drive was gathered at the second attempt by Paul Cooper.
Brazil missed yet another golden opportunity after the break  and the dangerous Beattie, a constant threat from set pieces, almost put his side ahead on the hour with a header that went inches past the post. The City defence responded magnificently to the pressure with Tommy Caton in particular in outstanding form. Beattie again sent a header inches over and the burley Ipswich defender must have guessed that it wasn’t going to be their day.
A mid-air collision between Beattie and Bennett minutes from time, saw the Ipswich man limp off and McColl come as a replacement. The referee finally blew for the end of ninety minutes and both teams took a well earned breather before the extra time began.
City attacked the Holte End for the first period and with 100 minutes on the clock, were awarded a free-kick on the edge of the Ipswich box. Skipper Paul Power, who had scored in every round but one, sized up the defensive wall and Steve MacKenzie rolled the ball gently into his path. He whipped a curling shot towards the goal. Cooper scrambled across to his right as the ball sailed into the top left hand corner of the net. Half the ground erupted and the Blue masses behind the goal went crazy.
… The celebrations continued for several minutes but there was a feeling that the game was as good as over. Flags, scarves and banners were raised as the City fans saluted their heroes and despite a few close scares, Ipswich lokked totally demoralised.
The scenes and noise that greeted the final whistle will live long in the memory of those who were there.
ADAPTED FROM ‘CLASSIC MATCH’ BY DAVID CLAYTON IN THE CITY MAGAZINE JULY 2002 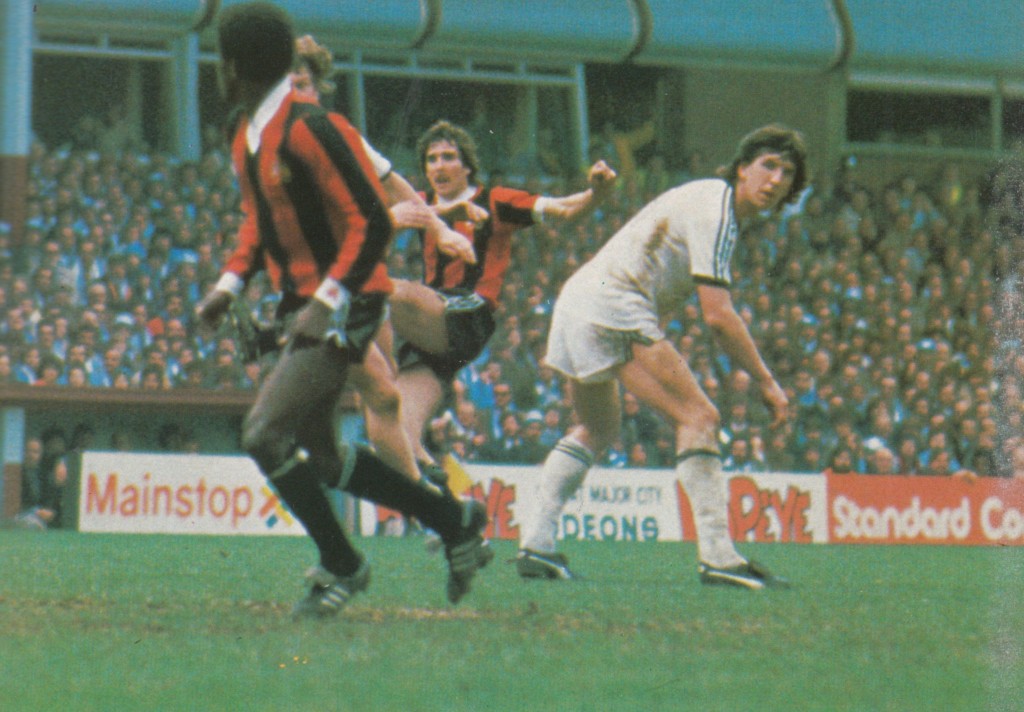 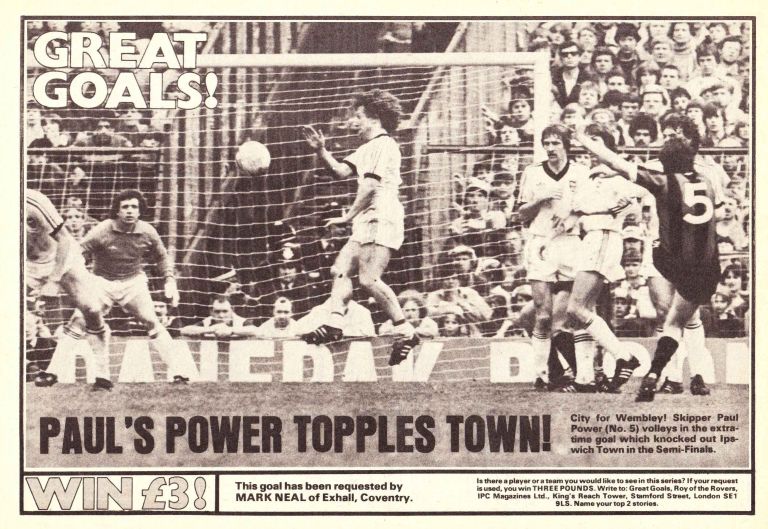 It’s a goal people still stop me on the street to talk about… The way it had been planned was that Steve McKenzie would play the ball to me and as one of the opposition broke from the wall to block the shot, I’d play it on once more to Tommy Caton, who’d then blast it goalwards. If nobody closed it down, however, I’d have a go myself.
At the end of 90 minutes, Ipswich midfielder Eric Gates passed me carrying his boots under his arm. I asked him where he was going and told him there was still another half an hour of extra time. He looked crestfallen, “Is there?” he said “Well you can have it for me”. As luck would have it , he was the player on the end of the wall when we were awarded the free-kick and because he didn’t close me down and Paul Cooper, who wasn’t the tallest keeper was in goal, I fancied my chances.
I’m so glad I did because it’s something people remember me by. I knew I’d hit it sweetly, but to see it go into the top corner was an amazing feeling…
ADAPTED FROM AN INTERVIEW WITH PAUL POWER BY DAVID CLAYTON IN THE JULY 2008 CITY MAGAZINE 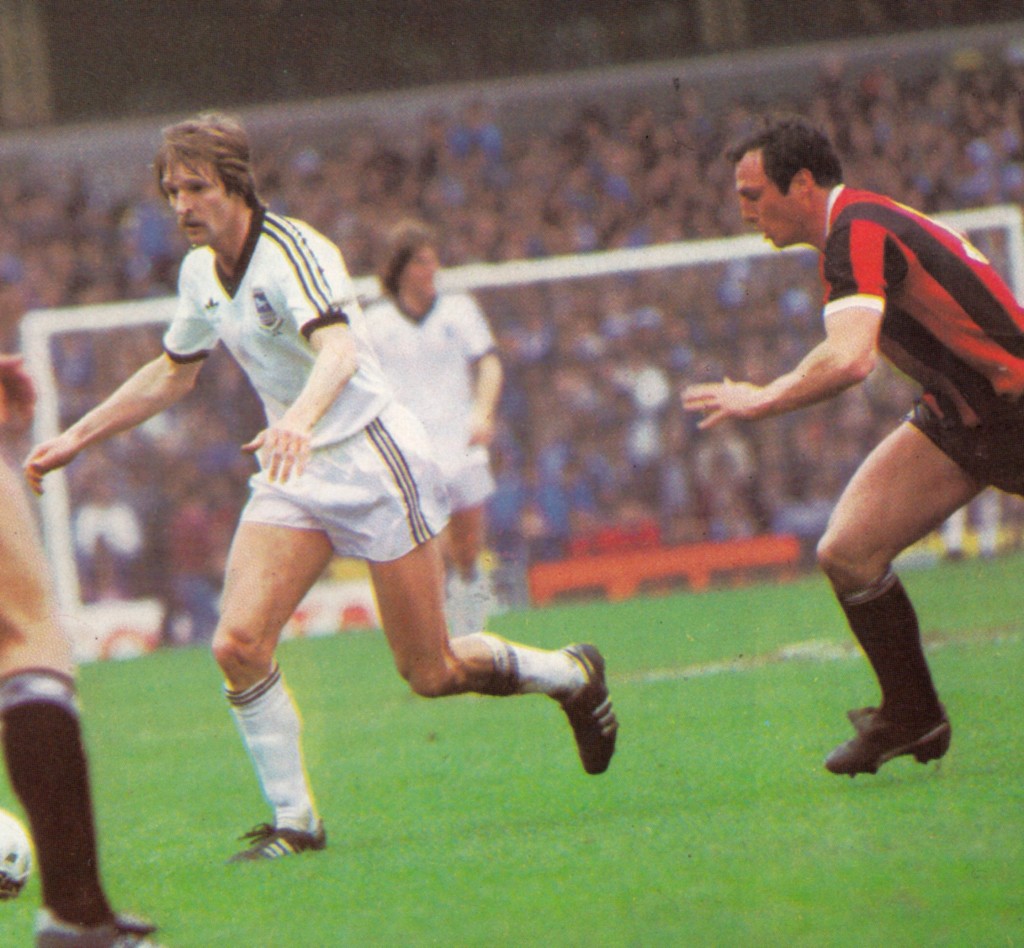 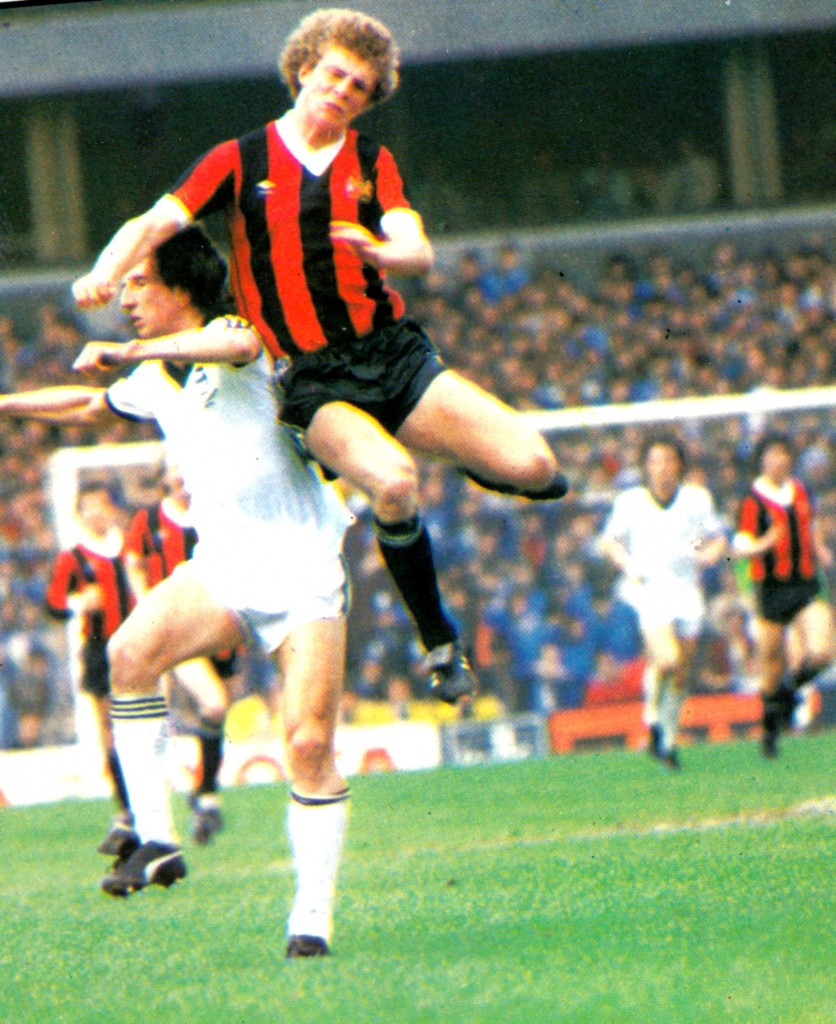 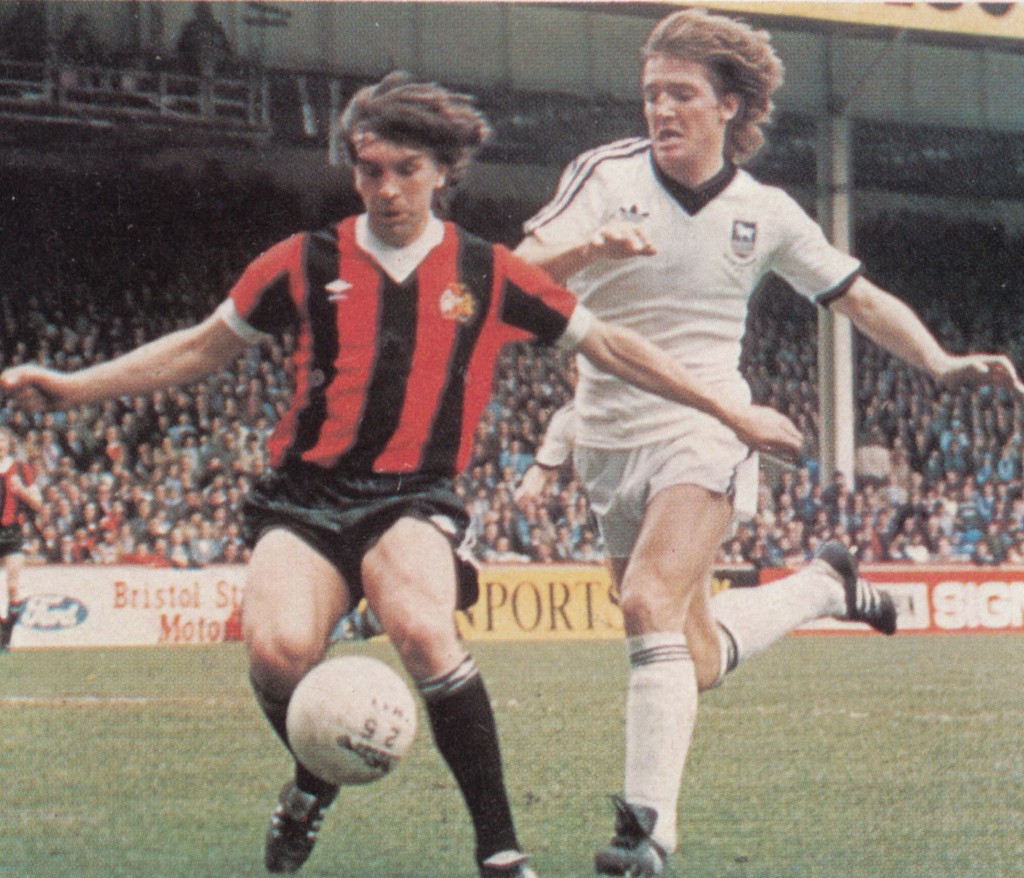