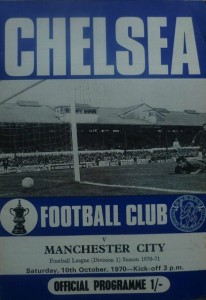 This game will be remembered by City fans for one reason, a quite breathtaking goal by Colin Bell, We are lucky, looking back, that the BBC’s Match of the Day cameras were there so we can all enjoy it. Indeed it was a moment made all the better by Alan Weekes’ memorable, passionate commentary; “What a Goal ! What a Goal !! What a fantastic Goal by Colin Bell.”
The goal came as City mounted their first meaningful attack of the game in the 21st minute. Glyn Pardoe attacked down the left, jinked into the box then passing back to Alan Oakes about 30 yards out, he flighted a lovely ball out to Colin Bell on the right who was stood on the angle of the eighteen yard box, The King met it with a beautiful volley which flew past Bonetti before he could even think about diving for it.
That goal was about all City could offer in a game where they, particularly in the first half, had to defend well against a strong skillful attacking performance from the Chelsea strikers.
Weller equalised before the break with a crisp shot from an Osgood assist and then City had two men to thank for taking a point away from Stamford Bridge: the linesman who flagged to disallow two Chelsea ‘goals’, both, where it was deemed a player not involved it the actual play was ‘interfering with play’. And secondly big Joe Corrigan, who commanded his box with great expertise and when called on made some very important interventions.