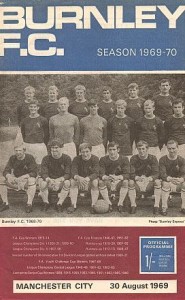 To be required to visit Liverpool, then in successive games at home to face the League champions and the FA Cupholders all within a period of seven days is a formidable assignment. Burnley, therefore, could not be blamed for thinking that their load might have been spread more evenly, But their draw at Anfield, then one against Leeds United, and latterly one 1-1 against Manchester City an Saturday caused justifiable satisfaction at Turf Moor. Burnley scored after only 20 seconds and they beat City’s defenders so convincingly that the onlookers entertained brief thoughts of a possible rout. Coates. broke away on the right, beat Connor for speed on the outside and delivered a centre which O’Neil either missed or deliberately let go through to Dobson who steered the ball past Corrigan. City, however pulled themselves back into the game in the third minute with a goal noteworthy for its simplicity.
This latest effort by Bowyer, who apart from his general enterprise and energy, is developing rapidly into a reputable poacher of goals, was a header of the quality for which he is already becoming famous. Mellor, who has been described as another Trautmann, was left stranded. Mellor nevertheless seemed slow to react as Bowyer, unmarked moved in to meet a free kick by Bowles. Although Mellor, formerly an amateur at Maine Road, touched the ball, he could not prevent it from going over his hands and under the crossbar.
The entertainment was maintained. Burnley were the better side in the ﬁrst half due mostly, but not entirely, to the thrusts of Coates, who was well supported in midﬁeld by Dobson, Thomas and O’Neil, But Burnley promised rather more than they actually achieved, and they still lack criminal finishing power.
A few tempers were lost on both sides but no player had his name taken. City had a slight edge in the second half, so that the result was a fair one. Like Burnley, however. City failed to add to their early goal because of a combination of inaccurate finishing and back luck.
A REPORT FROM THE GUARDIAN BY ‘A SPECIAL CORRESPONDENT’