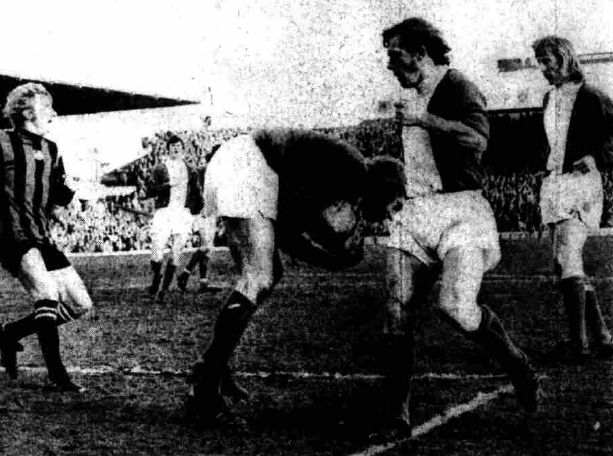 PETER GARDNER WRITING IN THE MANCHESTER EVENING NEWS FOOTBALL PINK FINAL
Manchester City were a goal down after only four minutes today.
It was a tragic error by Willie Donachie that gave struggling Birmingham the early boost at St Andrews. His back-pass to goalkeeper Keith Macrae was cut off by Bob Latchford. And the man who scored a hat-trick in the corresponding game last season made no mistake with his shot.
Macrae also had to save magnificently from Ken Burns and Bob Hatton as Birmingham threatened to overrun City.
The Blues’ best effort was a close drive from Colin Bell that hit goalkeeper Gary Sprake on the legs as he dived the wrong way.
Birmingham immediately put City under pressure, with Burns driving the ball high into the penalty area where Booth headed clear.
Then Francis cut loose sprinting to the edge of the City penalty area.
Marsh chased back gamely and put the Birmingham youngster off his stride with a neat back tackle just as he was squaring up for a shot.
Birmingham continued to press forward, and in the fourth minute put the skids under City with a goal that was as much the fault of the Blues as of their own creative ability.
Roberts came through strongly on the halfway line to send a powerful header over to the left of City’s penalty area. Donachie got the ball under control then turned to push it back to Macrae.
Tragically he did not hit his pass hard enough. Latchford, who scored a hat-trick in the corresponding match last season, hungrily snatched up the opportunity, shooting the home side ahead from close range.
It was a goal that certainly rattled City, and they came under further pressure until Barrett headed clear.
Then it was the turn of the goalkeepers to shine.
First Macrae made a superb flying save to turn behind a great long-range effort from Burns.
As City counter-punched Lee pulled the ball back to Bell who found space in the middle. Incredibly, his close-range shot struck Sprake on the legs and bounced behind.
Roberts stopped a Summerbee shot, then Gallagher headed away as Lee crossed.
Lee followed up by moving to the right flank in City’s next raid. But when he ran on to a pass from Summerbee his fierce shot, aimed at the near post, was confidently palmed down by Sprake.
City continued to look vulnerable at the back and when Doyle lost possession Hatton nipped in for a free shot at goal. Luckily the ball soared over the top.
A long high header from Burns had Booth scrambling back to check Latchford, but the alert Macrae had seen the danger and raced from his line to clear.
Marsh was busy trying to get City moving again and when Lee took over he was tripped by Pendrey 10 yards outside the Birmingham penalty area. But even the free kick was wasted, as Law drove the ball straight into the home defensive wall.
Nothing appeared to be going right for City. For when Bell teed the ball up for Barrett, the full back hit it tamely, straight to Pendrey.
… Birmingham playing some fine football as they ripped huge gaps in the City rearguard, were always the more commanding side.

But they were lucky in the 37th minute when a shot from Towers was deflected by Gallagher. The ball amazingly flew straight to the hands of Sprake, standing just behind his left back.
A great solo run by Francis Lee certainly deserved a better reward. He sliced the City back ranks, then snatched at his shot, hitting the ball high over the bar.
Half-time: Birmingham 1 Manchester City 0
… Birmingham appealed for a penalty when Towers blocked a shot from Campbell, but there was no response from referee Daniels, who had the sun shining directly into his eyes.
Campbell also having a fine game for Birmingham, cleverly dribbled round Towers and Barrett, but was then tripped by Bell.
From the 55th minute free kick, Birmingham almost got a second goal.
Pendrey hit his cross hard into the heart of the City penalty area, and it was Burns who got to it, gliding a header towards the bottom corner of the net. The Blues, however, were let off the hook. For the ball glanced against the upright and bounced clear.
… But City, fighting back hard, were rewarded in the 62nd minute. And again it was that man Law.
From a Marsh throw-in on the left, Lee crossed to the near post where Law rose to direct a smart header past Sprake, maintaining his goal-a-game record of the last six games.
Barrett next came through strongly on the right, firing in a vicious shot that hit Sprake on the chest and bounced behind for a corner.
… City almost got a winner two minutes from the end when a shot from Marsh glanced off Sprake before being cleared by Calderwood.
… And right on the last minute from a left wing corner, Gallagher turned in a header that Donachie headed from off the line, saving a certain goal.