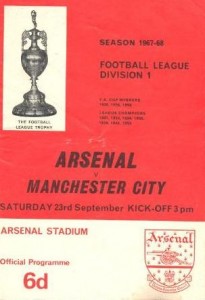 Arsenal supporters obviously feel that a funeral is a bearable occasion if you stand to beneﬁt from the Will. They sang and chanted lustily through this depressingly shabby match, happily blinded by visions of a returning greatness.
‘We‘re the champions’ they roared in unison towards the close of the ﬁrst half, long after the adventurous thrusts of the opening minutes had given way to an anaesthetising succession of brutal collisions, a contest as subtle and edifying as an infantry engagement on the Somme.
Later they sang ‘ You’ll Never Walk Alone’ with a fair imitation of Merseyside conﬁdence, But their private nervousness over their team’s present erniinence in the League was betrayed when they started to whistle for the referee to end the game.
Points are the only meaningful currency at Highbury now. Entertainment is a bonus they will not demand more than once every few weeks. As it happened the fears of the whistlers were groundless. City, who had begun with a bold, free running aggression. were by then bedraggled and resigned, their challenge reduced to the residual spirit of the overworked Summerbee and the graceful ill-rewarded inventiveness of Bell. All afternoon these two had impressed in the midst of incompetence.
Their only support in attack came from the occasional surges of Coleman and he decreased his value with a recurring petulance that was only partly excused by the relentless harshness of Storey‘s tackling.
Hjnce on City‘s right wing was spectacularly fatuous for the 70 minutes he was on the field. As one blunder followed another it appeared that the frail fair-haired youth must he a ballboy who’d become involved in the game by mistake. The injury that caused him to be replaced by Connor had its merciful aspect.
There was no such relief for Young. who paraded his inadequacies, his languid lack of authority to the end.
The compensation for these Weaknesses provided by the half-back line was mainly in raw strength, Heslop’s control of the ball did not match his muscularity and more than once his stumbling misskicks left Dowd facing unhampered Arsenal forwards.
Surely the Arsenal. eulogised after last week’s victory over Tottenham, would have dealt convincingly with such moderate opposition? But today they had to settle for being winners without any hope of being heroes
Clearly one source of their difficulties was the failure of Mclintock to operate as damagingly as he as done in recent matches. His was surprisingly pallied performance. Even the hunger for action, the imaginitive wandering was little in evidence.
Sammels, too, was useful rather than inspiring in midﬁeld, and there was more proﬁt from the precise distribution of Addison and the unselﬁsh running and wholehearted challenges of Radford,
Graham bustled much but rarely broke clear of Heslop, for all the centre-halves anxieties, and Armstrong‘s tireless combativeness was more a pleasure to the crowd than a menace to Manchester.
Ure was undeniably the outstanding Arsenal player, serenely assured whether deep in the back line of the defence or moving through with loping runs on the wings. He would not be worried by the knowledge that Bobby Brown. the Scotland team manager, was in the stands. Yet the most effective contribution of all may have been a cruder one.
Sumrnerbee, holding the ball tenaciously under pressure and forcing himself into positive positions before making his passes, looked capable early in the game of breaking Arsenal’s run. Instead he was almost literally broken himself.
Neill did not so much tackle him as run over him and the abuse Summerbee suffered was ultimately crucial.
Most of the memorable football came before Arsenal’s goal. One wonderful attack involving half a dozen players might have given Graham an early score when Addison edged the ﬁnal pass behind Pardoe to the centre-forward. But Dowd came out to make a splendid smothering save.
Soon Furnell was in similar trouble when McLintock lost the ball carelessly and turned to see Bell sprinting clear. Furnell came rushing out to save and stayed in the confusion to make a dramatic lunging interception on the edge of his area.
The violence had already. begun to corrupt the game, with Neill, Storey, Heslop, Summerbee, McLintock. Graham and others in vicious contention.
However, our minds were taken off these sordid activities after 25 minutes when Armstrong gained a corner simply on the lelt wing and just as simply placed the kick on Radford‘s head. With both feet ﬁrmly planted Radford, who had been supporting Graham in the spearheading job, sent his driving header into the top of the net off Book’s skull. The rest of the half, indeed the rest of the match, was largely a matter of fouls impulsive and fouls cynicaL
Book found himself vulnerable to some outrageous punning when he had his name taken for an especially wild foul on Armstrong, and several others were fortunate to escape similar notoriety after the interval.
By the ﬁnish Arsenal were controlling the game with some comfort if no great style. The result was certainly just, but the cheers of the 41,000 spectators were not for victory in the battle. They conveyed hope of winning the war.
HUGH McILVANNEY WRITING IN THE OBSERVER 24TH SEPTEMBER 1967