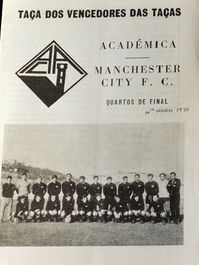 ...Coimbra were being dismissed as a side composed of students, whose main aim in life was to pass their exams. Football, it was suggested, came very much second to studies and City shouldn’t have any trouble at all… I’m afraid we began to swallow the talk that Coimbra were there for the taking. We allowed ourselves to be lulled into a false sense of security.
It took us only 10 minutes play to realise what we were up against. Coimbra had some hatchet men  and their all black strip seemed to give them a sinister appearance. At first we were more concerned with keeping out of trouble and being 100% ready for the League Cup final against West Brom the following Saturday but, when we saw the way it was, we began to get stuck in ourselves. With half-time looming, we could see that Coimbra were beginning to tire a bit, although in Nene they had a player who still looked as if he might do some damage to our chances. Fortunately he limped off early in the second half and we were thankful to see the back of him. We stuck grimly to our task and settled for containing Coimbra, in the confident belief that when we got them back to Maine Road we would be able to call the tune. We held firm to leave Portugal with a 0-0 draw.
BLUE BLOOD THE MIKE DOYLE STORY BY MIKE DOYLE WITH DAVID CLAYTON