Ralph Brand was transferred to to Sunderland for £5,000, the week before the start of the season.
City’s pre-season consisted of a 2-0 win at Portsmouth and then against German opposition as they took on Borussia Dortmund at Maine Road and won 4-0.
The first game of the season saw the visit of Liverpool and an entertaining 0-0 draw was the result. City faced a long journey to The Dell for their first away game and were beaten 3-2 by Southampton , the same day Johnny Crossan moved to Middlesbrough for £30,000.
A trip to the Potteries proved even worse with a 3-0 defeat to Stoke. Malcolm Allison was unhappy with City’s effort at The Victoria Ground and called the display ‘disgraceful’.
The Blues got an early chance to avenge their defeat at The Dell as Southampton visited Maine Road and City gained their first win of the season winning 4-2, three days later table topping Nottingham Forest were the visitors and were well beaten 2-0 by an improving City side.
So five games into the season and the Blues lay in 11th place, three points behind leaders Sheffield Wednesday.
Manager Joe Mercer was not entirely enthralled by City’s attack so far, and the month of September saw him go on a series of scouting missions. Almost every day Mercer was reported as being interested in a different player with Blackpool winger Alan Skirton, Everton’s Alex Young, Hull’s centre-forward Chris Chilton, and Mike Leach of QPR appearing to be his most popular targets.
While discussions with a variety of players continued behind the scenes, coach Malcolm Allison was encouraged to focus on the current squad. His efforts soon brought dividends as the City made it three home wins on the trot with a 2-0 victory against Newcastle. On 7th September Mike Summerbee hit the headlines when his boutique on King Street West, owned in partnership with George Best, was officially opened in front of a whole host of celebrities including musician/TV presenter Simon Dee. 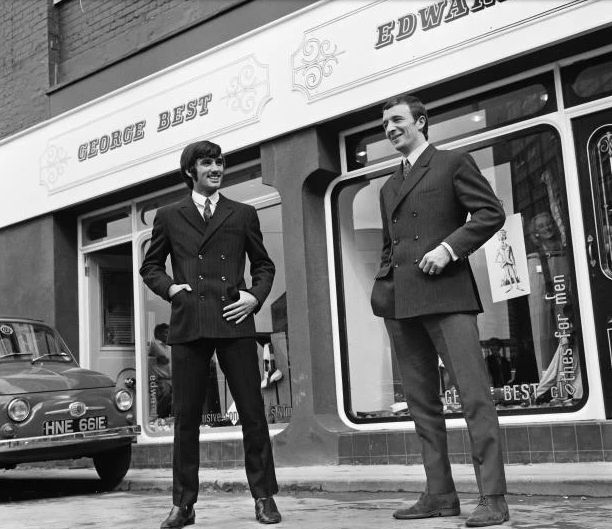 City then embarked on what would be a troublesome end of season tour of the Americas, City played nine games in all. They played Dunfermline twice in two days, both games ending 1-1, they then beat Rochester 4-0, lost to Atlanta Chiefs 3-2 and were also defeated 2-1 by Borussia Dortmund. They then played Dunfermline twice again drawing 0-0 on both occasions and then finished the tour with two defeats 3-0 against Oakland Clippers and 2-1 against Atlanta Chiefs.
On their return to England, Joe Mercer said “We shall never again attempt to make such an exhausting trip as this has been. It was too long, there were too many matches involved and everyone of them was like a cup tie. Our troubles really started before we set off because Mike Summerbee, Colin Bell and Mike Doyle had been called up for England and Alan Oakes had been released because he is a bad traveller. Thus our playing strength was cut down to 14 instead of the 18 players we expected to have available.
The injuries hit us hard that at one time we only had seven fit players in America and in one particular match we played with nine men for over an hour after two of the boys  had been sent off.”

THE STORY OF THE SEASON FROM ROY OF THE ROVERS COMIC 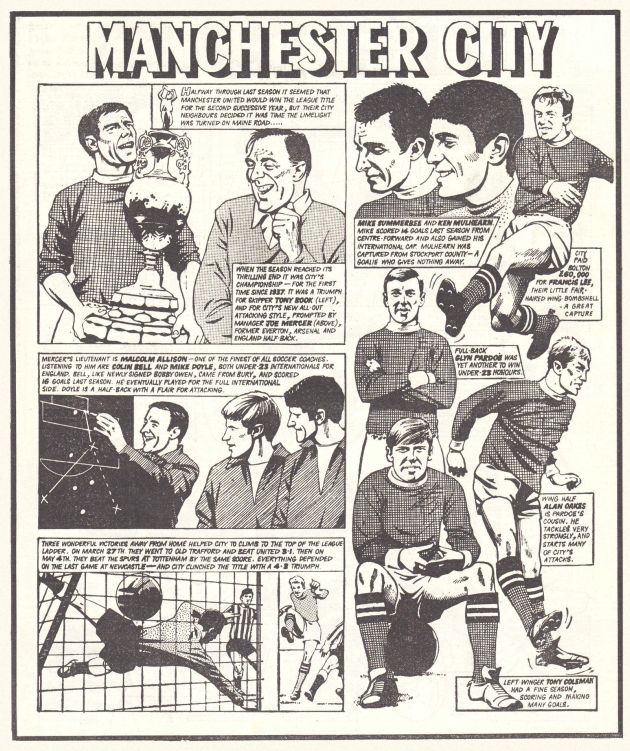