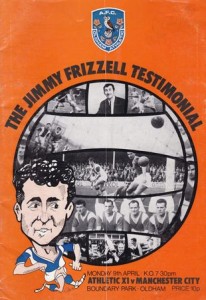 MATT D’ARCY WRITING IN THE MANCHESTER EVENING NEWS 10TH APRIL 1973
Nearly £3M of soccer talent spread their colourful skills over Boundary Park last night, but the evening belonged to a £3,000 footballer named Jimmy Frizzell.
That’s what it cost Oldham to buy Frizzell, now their manager, from Morton 13 years ago.
And that’s the amount Frizzell will eventually collect from his testimonial, which was highlighted by Manchester City’s 4-1 win over an Oldham side last night.
A crowd of just over 7,000 paid more than £2,200 to see the game and pay their own tribute to a man who has served Athletic for 13 years as player, trainer and manager.
City paid their own tribute of sending a powerful line-up which won comfortably with goals from Tommy Booth, Francis Lee and a couple from Colin Bell.
Jim Fryatt, guesting in the Oldham side, scored early in the second half.
Said Frizzell: “I must thank the hard work of a lot of people, including the committee. They’ve been wonderful.”