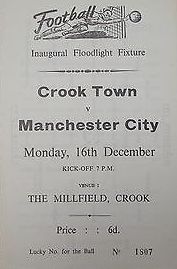 An ordinary Friendly took on a special significance for City on 16th December. The team played at Crook Town to mark the home team’s new floodlights and won, predictably, 6-1. But what was special was the return to action of two Blues who had been suffering achilles problems; skipper Tony Book and Stan Home. Book, in particular, had been sorely missed all season and his run-out in an unfamiliar no. 11 shirt was regarded as a major step forward to full ﬁtness.
In an entertaining game, City showed glimpses of the cavalier-style football which had won them the League Championship the season before, with goals from Lee (3), Coleman, Bell and Owen.
JOHN MADDOCKS WRITING IN THE CITY PROGRAMME 17TH DECEMBER 1988