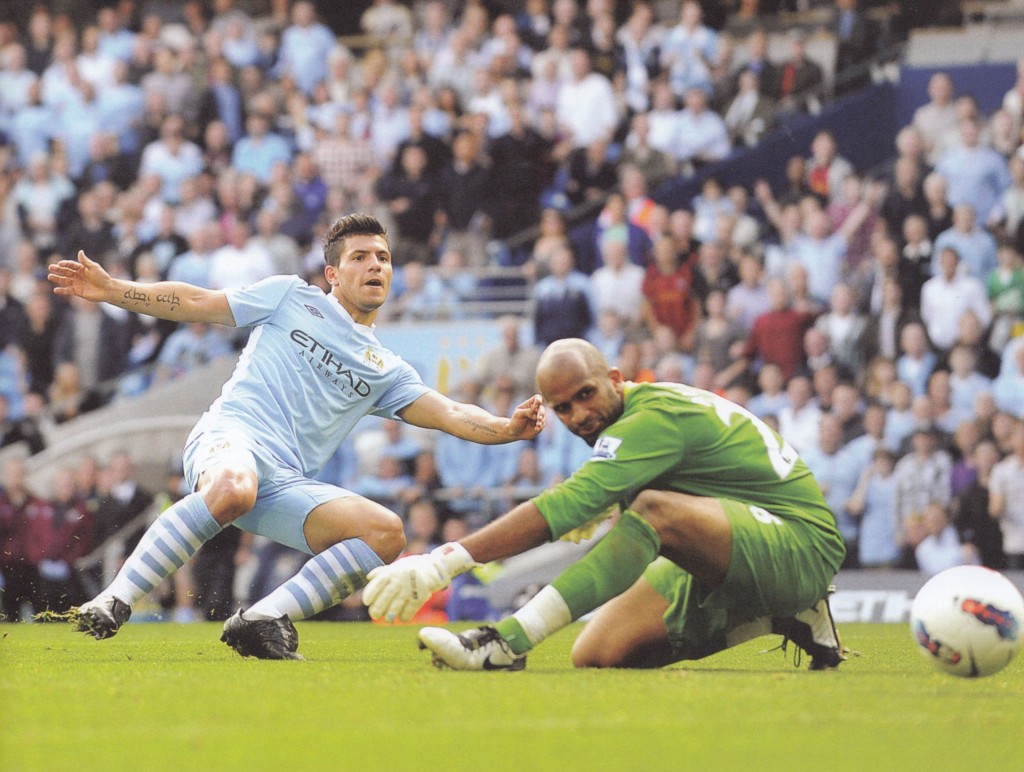 From an article by Mark Booth in The City match programme 24th September 2013
Sergio Aguero completed his first hat-trick in English football against Wigan to maintain City’s 100% start to 2011/12.
In doing so, the Blues extended their 18 game unbeaten record at the Etihad Stadium and treated the 46,509 supporters present to a first class display of attacking football.
…Summer acquisition Aguero was clearly finding the Premier League to his liking, having scored three goals in his first three encounters going into this meeting with the Latics. Therefore, it was no surprise to see the Argentine striker in the line-up alongside Carlos Tevez who made his first start of the season, with David Silva and Adam Johnson on either side. 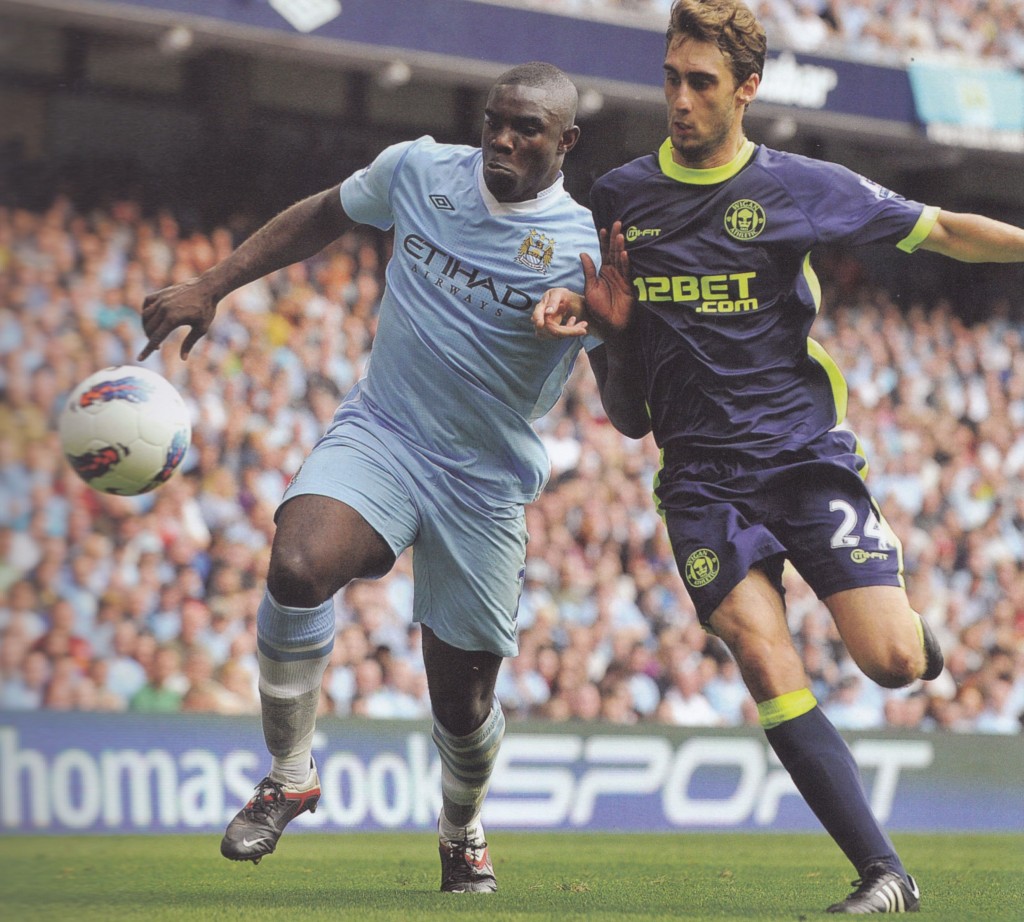 James Milner and Yaya Toure anchored midfield against a Wigan outfit which included South America triumvirate Hugo Rodallega, Manuel Figueroa and Franco Di Santo.
A warning shot for Wigan was fired as early as the fourth minute when Silva drew a fine save from Ali Al-Habsi with a shot that the Omanian turned onto the foot of the post.
Pressure was mounting from the home side and City made their breakthrough in the 13th minute when ‘The Three Amigos’, Aguero, Silva and Tevez, all combined to great effect.
The trio moved the ball between them inside the penalty area before it fell to Sergio to cut a shot back beyond Al-Habsi for the opener. 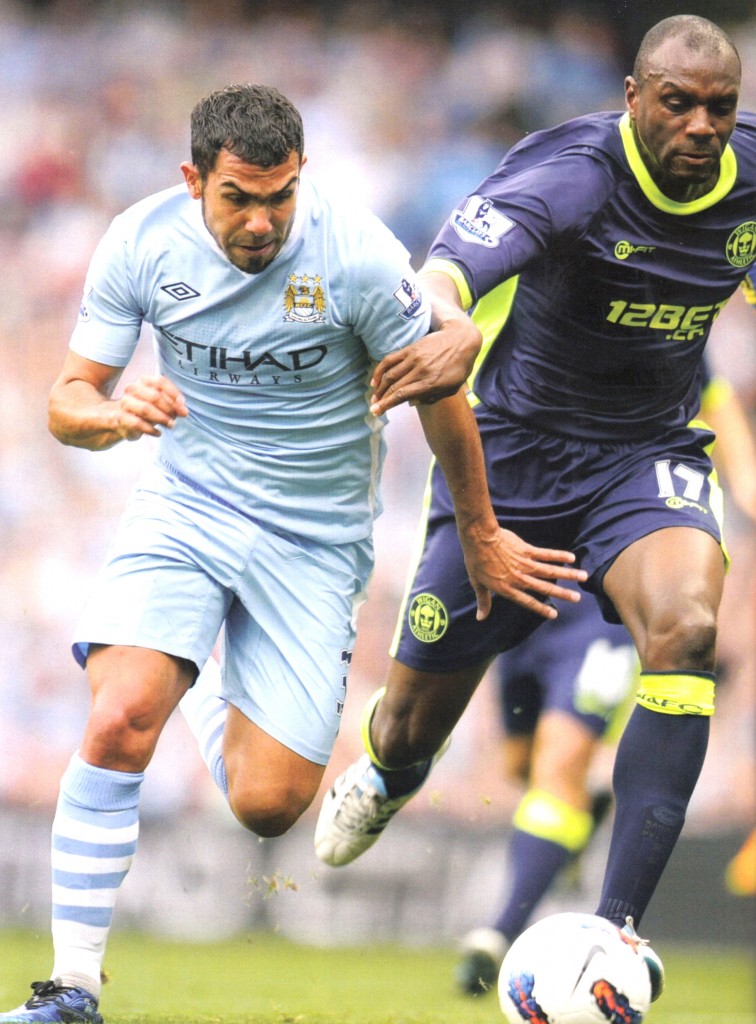 Four minutes later, a wriggling Silva was taken down inside the area but Tevez passes up a golden opportunity to double City’s advantage when he tamely scuffed his penalty kick into the grateful arms of Wigan’s number 1.
Despite his missed chance, Wigan’s stubborn resistance already looked broken and they appeared to revert to damage limitation mode but, unfortunately for them, in this kind of form City would not be denied. 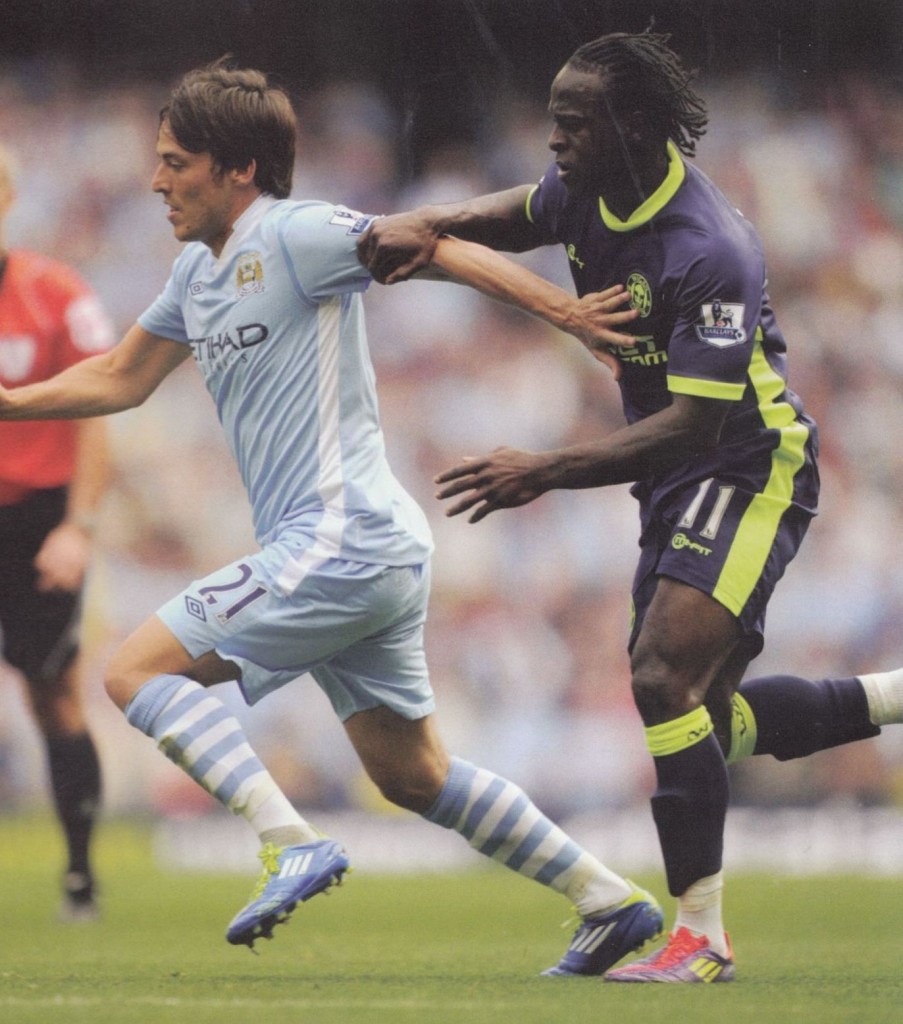 Vincent Kompany rattled the post with a header from a Milner corner, Micah Richards spurned a glorious chance and Adam Johnson wasted another as the Blues huffed and puffed for the killer second goal either side of half-time.
However it was Aguero who provided it after 63 minutes when the Argentine striker finished off some sublime build-up play from Toure, Silva and substitute Samir Nasri with a neat finish past Al-Habsi to double City’s lead. Five minutes later, the matchball was his.
This time Aguero latched onto a stunning through-ball from Silva and showed the City faithful that one of world football’s great finishers was now playing in their colour, with a natural strike past the keeper.
That was the end of the scoring but it was enough to propel the Blues back to the League summit.
…In winning this clash, Mancini also equalled a club top flight record, set by Tony Book’s side, of winning seven top flight games in a row.