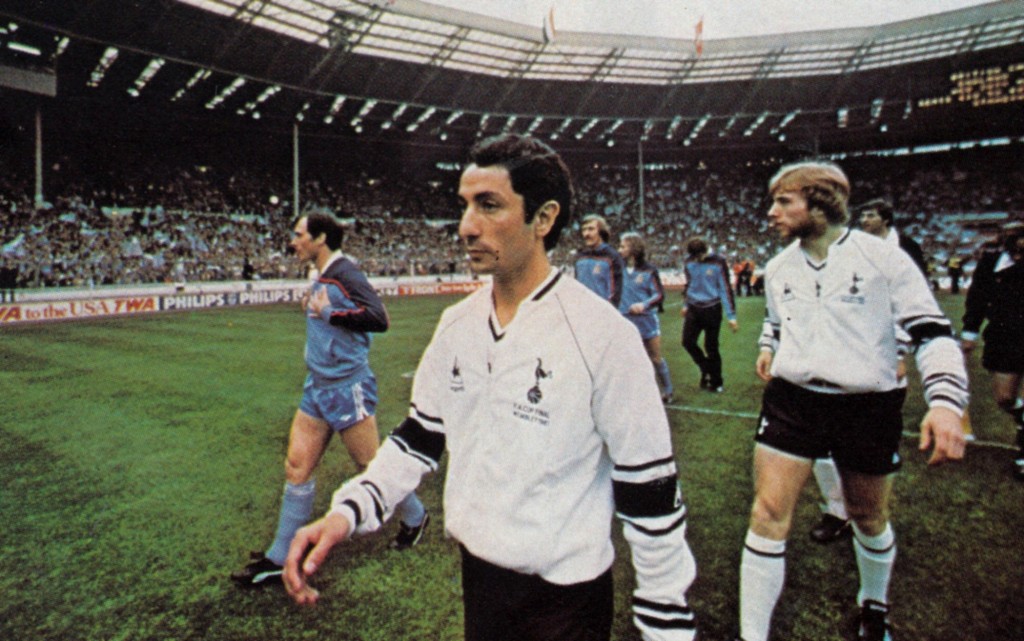 DELIGHT AS TOMMY HUTCHISON HEADS CITY INTO THE LEAD 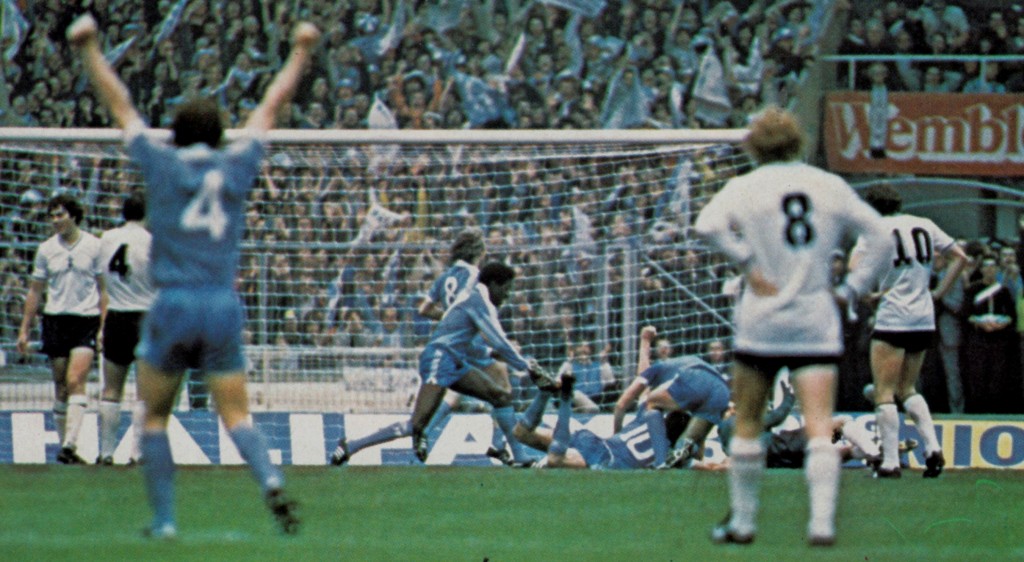 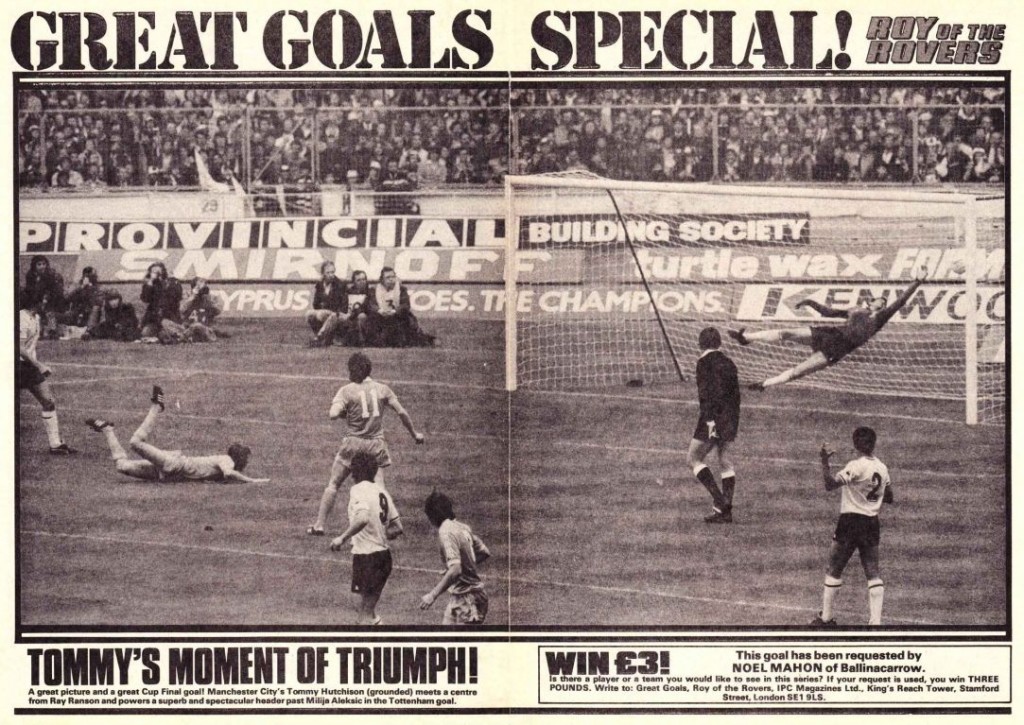 The tenth draw in 100 F.A. Cup Finals, the first since 1970 and only the second since 1912,
… The hope of high scoring between Tottenham Hotspur and Manchester City was easier to express than to fulfil. What we did get was nevertheless, an occasion of supreme endeavour and commitment; a first hour in which Manchester City were superior and deservedly ahead, then a period when Tottenham played themselves back into the game; a freak own-goal equaliser by Tommy Hutchison, at 33 the oldest player on the field, after he had headed City into the lead; and an extra half-hour that ended with more players, mostly Tottenham men, stretched out through cramp and tiredness on Wembley’s sacred turf than one could ever recall. 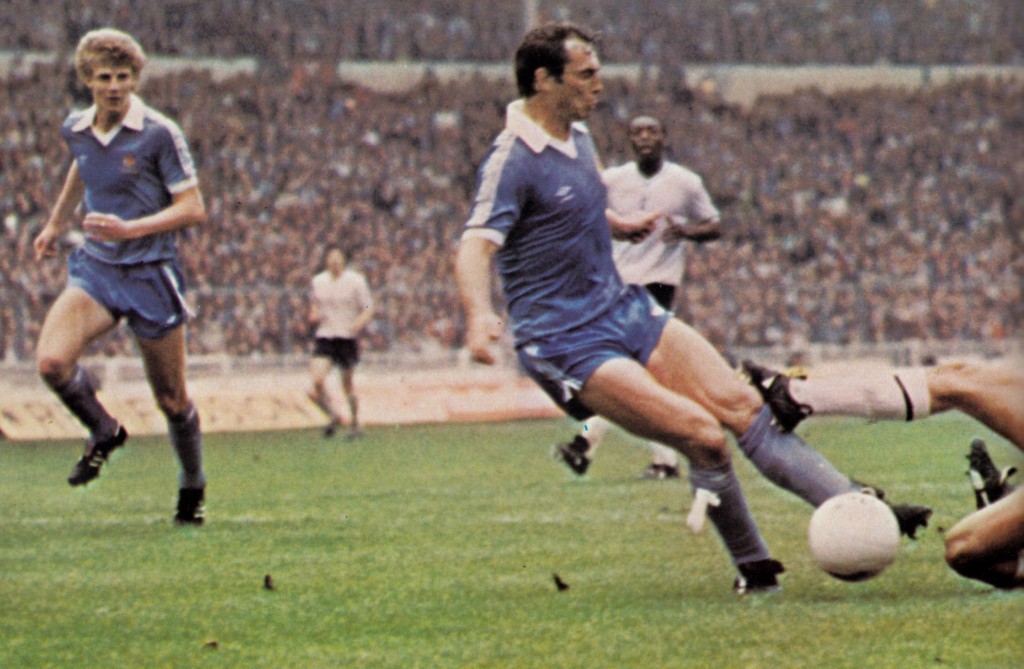 The 100th Final deserved blue skies. Instead, the day brought grey clouds, a humid atmosphere and rain before the match left the surface skiddy. But from the moment Her Majesty the Queen Mother walked out to receive the teams ten minutes before kick-off, everything seemed well for the occasion. And the crowd played their part, singing Abide with Me with something of its old feeling and respect.
After only four minutes, the ball went flat. With its replacement, Spurs midfield men, Ardiles and Hoddle were allowed neither time nor space, and up front Archibald and Crooks, short of supply, were in the grip of Reid and Caton, the youngest pair of centre-backs ever seen in the Cup Final.
City opened with four corners in five minutes from an attack that carried its main menace through the skills of Bennett and Hutchison and with Power, the captain, surging through on the left. At times, Spurs were defending desperately, with Roberts, one of the least experienced players on the field, involved in almost everything, including the loss of two teeth in a frightening contact with his own man, Hughton. Manager Burkinshaw made Roberts Tottenham’s ‘Man of the Match’, and few Spurs followers would argue.

On the half-hour, City scored the 150th goal in F.A. Cup Finals at Wembley. Ranson crossed from the right and Hutchison, rising some ten yards out, sent the ball into the top right corner with astonishing speed for a player who confesses that he usually shuts his eyes when heading the ball.
Things might have been worse for Spurs, for Mackenzie shot against the foot of a post after going round Aleksic. Yet certain statistics defied the general flow of the game, because by half-time Corrigan had made some superb saves, diving left to keep out Roberts’ downward header and Galvin’s shot, and then rushing from his line to check Crooks’ breakthrough on the edge of the penalty-area. With Ardiles moving further upfield from the start of the second half and Hoddle finding a little more space and time on the ball, Spurs at last began to play to something approaching their potential. But City held firm. After 68 minutes Villa was replaced by 19-year-old Brooke, who at once added life to the Tottenham attack and nearly scored in his first involvement, one shot blocked and his follow-up stopped by Corrigan, who had recovered position brilliantly after Archibald took the ball round him.
With ten minutes remaining and the score still 1-0, the 100th Final looked like joining hands across the century to the first, which was also decided by the only goal. Then Gow lost possession to Ardiles, chalIenged and brought him down two yards outside the box. From the free-kick, Hoddle shot hard, but not well enough to beat Corrigan, who had the shot covered, but the ball struck the shoulder of Hutchison, who had dropped back behind the wall for the free-kick, and was diverted across goal for the equaliser. 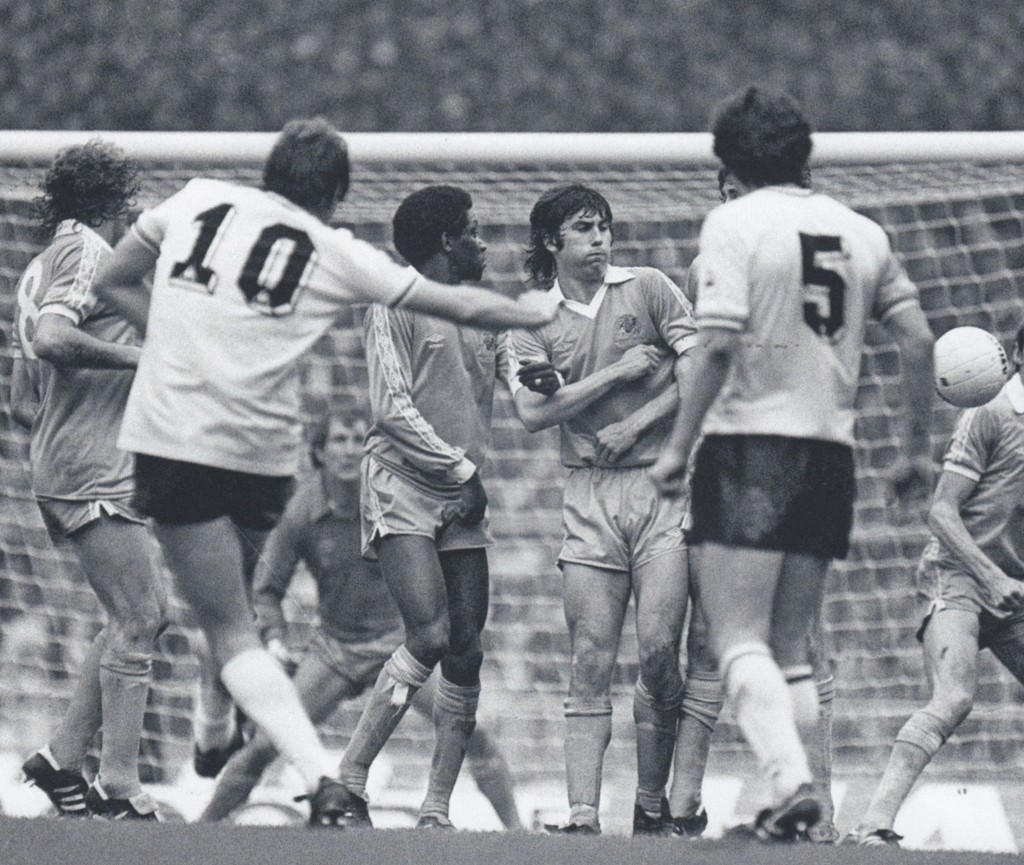 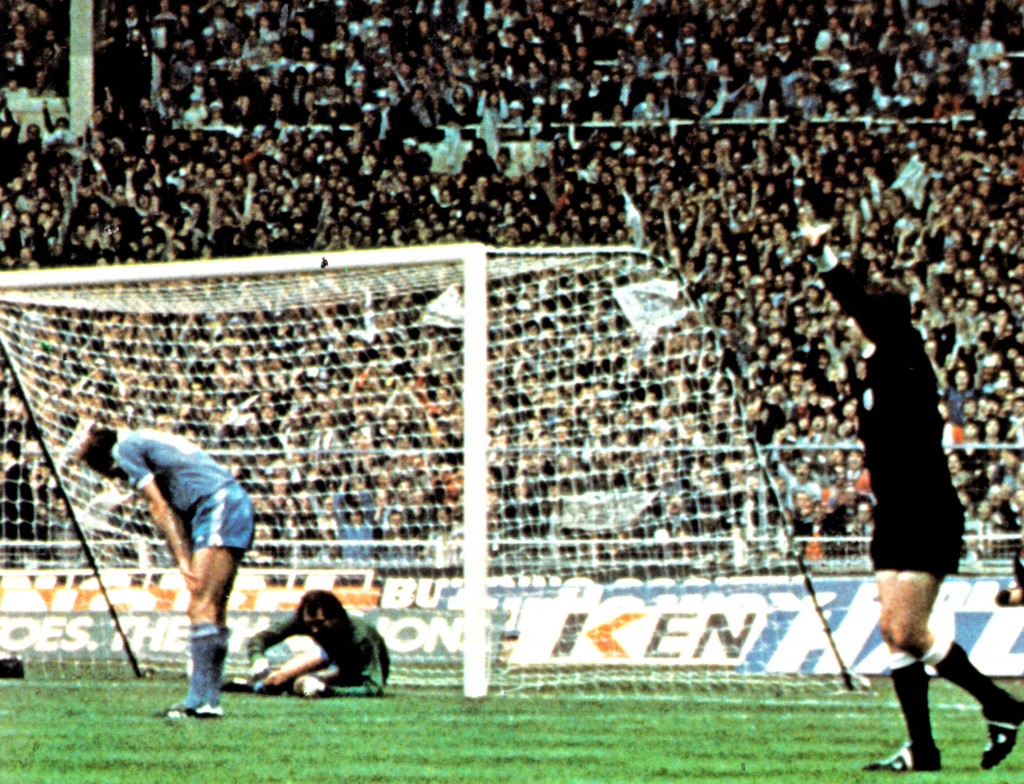 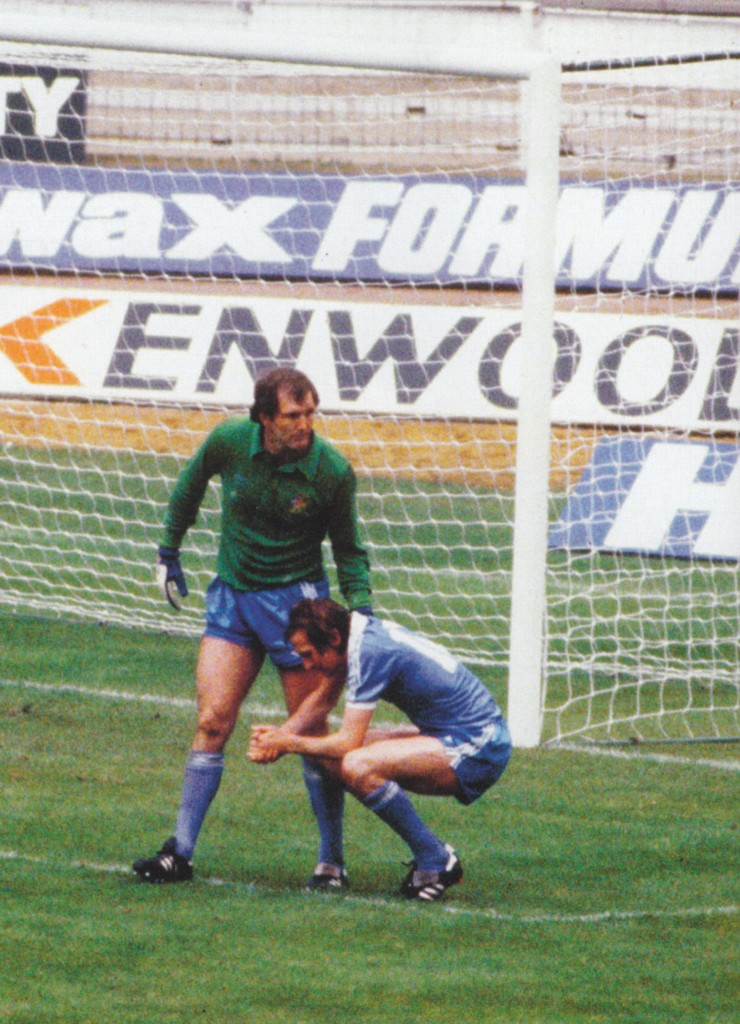 So Hutchison joined Charlton’s Bert Turner (1946 against Derby) in the Cup Final records by scoring for both sides, and the match went into extra-time. Limbs grew weary, muscles succumbed to cramp; in the closing moments Spurs had three players lying on the ground and two reduced to walking pace. Five more minutes might well have settled everything in City’s favour.

When Keith Hackett blew the final whistle, everyone seemed relieved. He had given a man-of-the-match performanoe of his own, mixing firm control with an understanding of situations which others might have interpreted differently. And two tired teams hauled themselves up the steps to be received again by the Queen Mother, but neither side to receive the Cup.