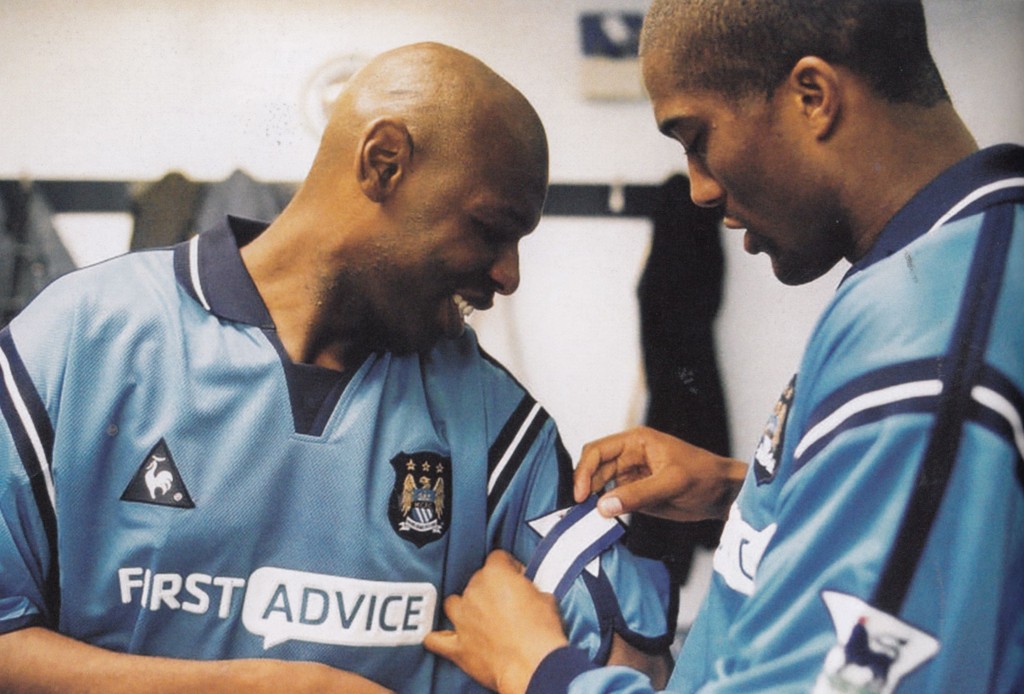 It was every bit as gut-wrenching to be at Maine Road yesterday afternoon as I feared it would be. And I didn’t need reminding by a score of fans that I’d promised I wouldn’t be there to to witness the Last Rites being read over Manchester City’s headquarters. Believe me it wasn’t my choice.
Kevin Keegan had urged us not to wallow in the past but to look forward to the future that awaits us and our club in the wonderful City of Manchester Stadium. And he’s right to do so. It’s time for us to move on. But I’ve got 50 years of memories invested in that bits-and-pieces, lovely old stadium in Moss Side, and so have thousands of City fans like me who are no longer in their first flush of youth. And I’m sure I’m speaking for every last one of them when I say that being at Maine Road yesterday was like attending the funeral of an old and dearly loved friend.
It’s the little things that get to you on an occasion like this, isn’t it? The memories just flood back when you least expect them and suddenly you’ve got a lump the size of a golf ball in your throat.
Just parking up in that playground at the little school facing the back of the Kippax. How can that be emotional? It was for me yesterday. How long have I been using that spot? More years than I care to remember. And never again am I going to drive through those iron gates and get the thumbs up from the girl who always waves me through with a beam on her face, I’ll miss her almost as much as the old stadium itself.
The walk from theat playground to the press door at the far end of the Main stand, how many times have I made that walk down the years? I’ve no idea but I wish I had a pound for each one.
Passing the spot on the corner opposite the ticket office where the old groundsman Stan Gibson lived. Stan loved Maine Road like it was one of his own kids. When I was masquerading as a City player back in the late 60’s, Stan used to blame me for any ruts down the right hand side of his beloved pitch. He used to tell me those ruts were caused by my nose. He was joking – I think.
I paused for a second as I passed where Stan once lived. He would have hated this day. Apart from family, Maine Road was Stan’s life. The thought of the proud old girl being bull-dozed into rubble would have been unbearable to him, I’m sure of that.
Minutes later I was looking down on the best pitch in the Premiership from the press box right at the back of the Main Stand.
…The parade of legends is just beginning and now the memories are overwhelming me. Some of the stars of the fifties are taking a bow.
…The fifties gave way to the sixties and it was time to say thankyou to the members of the best City team in my lifetime which won so much under Joe Mercer and Malcolm Allison. Tommy such a cultured centre half, the indominable Alan Oakes and ‘Barney Rubble’ himself – the barrel chested goalscorer 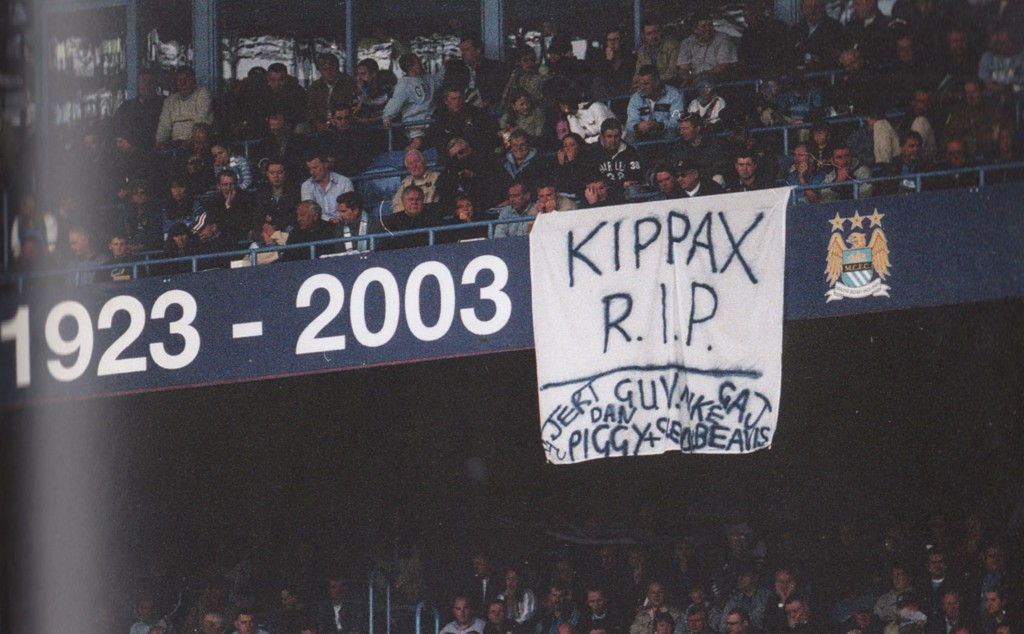 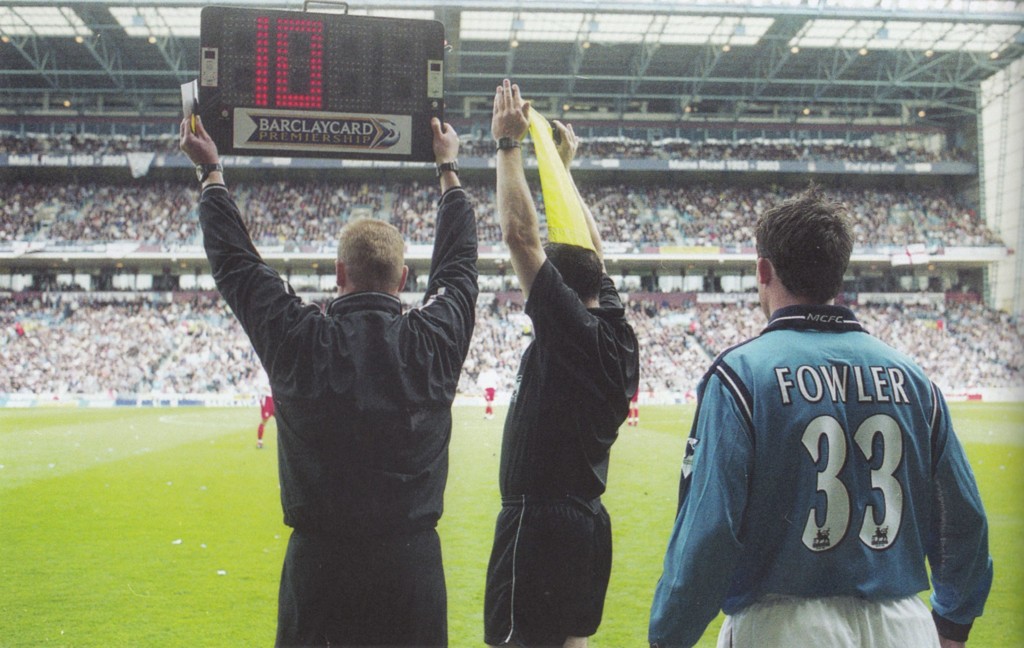 …Finally it was confirmed that i would captain the side for the last game, and from then on I had to prepare mentally so that I would give a good performance on the day, especially with it being Maine Road’s last game.
The fact that it might be my last game for City was secondary as far as I was concerned.
…Knowing the historic importance of the day I left earlier than usual for Maine Road. It was typical Mancunian weather, grey skies and light drizzle, as I turned off a side street towards the ground. It was only when I arrived in the car park that I realised that a lot of supporters were treating this not only as Maine Road’s last game, but as Shaun Goater’s day too. No sooner had I turned off the engine than about 100 people swarmed around my car. Security came over to make sure I was okay and it took me about 45 minutes to walk 50 yards to the player’s entrance.
Anita settled the girls and started filming everything. Looking back at the tape it is unbelievable.
As I neared the entrance the fans started singing my name and it was an incredible start to what would be a very emotional day. Whatever was happening regarding my future it was clear that so far as people I had met outside were concerned this was my last game for City, and their last chance to get an autograph or to wish me well.
Once inside, I must admit I felt a little drained physically and emotionally, which was not ideal because if this was to be my final appearance I wanted to go out on a high.
…Keegan announced the team and said that I was going to be captain, and I felt really proud and honoured to be the man leading City out for the final game at Maine Road.
…Finally, it was time to come out, and as we walked down the tunnel we were hit by a wall of noise and a sea of banners and flags; and there were so many withy my name on that I was stunned.
…This was Maine Road’s day, but the fans seemed intent on making it into a special day for me too.
…I tossed the coin and we got into the game, but I was mentally drained by the occasion and also knew that Southampton were there to spoil the party.
…We were both mid-table and I think 8th place was up for grabs in terms of something to play for other than the history of the day. But of course we had to win. They were more relaxed than we were, and the emotion of the day certainly got to me.
At half-time we were 1-0 down and in the dressing room Keegan told me that he didn’t care if it was my last game and added “If you don’t buck your ideas up your coming off in five minutes.”
…In fairness to Keegan I think he was just trying to put across how important it was for us to win the game, but we all knew that and felt the same way he did. As it was after about 15 minutes of the second half he brought me off and put Robbie on, but although I was disappointed to come off earlier than I had expected to, I still did not feel for certain that this was going to be my last game for City because everything was still up in the air.
The standing ovation I received from all four corners of the ground, even the Southampton fans proved that so far as the fans were concerned I would be leaving in the Summer. It was truly breathtaking, awesome, call it what you will, but I was humbled by it.
EXTRACT FROM FEED THE GOAT BY SHAUN GOATER AND DAVID CLAYTON 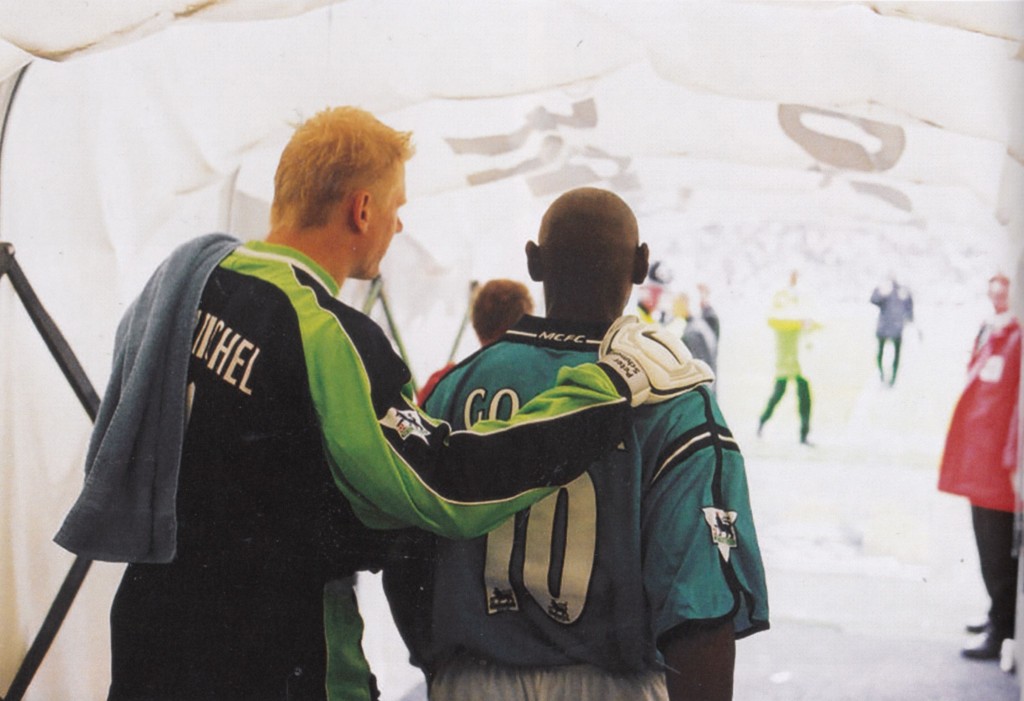 AN EMOTIONAL FAREWELL TO THE GREAT OLD STADIUM