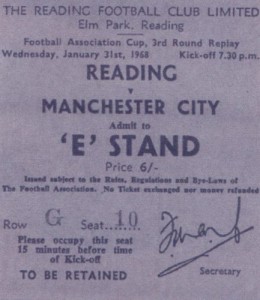 FROM AN ARTICLE IN THE CITY PROGRAMME 3RD MAY 1997
The Blues dominated  from beginning to end, and  let the goal-count tell the  story of the avalanche
26 mins: Bacuzzi ﬂoored  Coleman, whose superb  free kick found Heslop in the middle.The former  Evertonian powered a  header past Dixon.
28 mins: Young found  Colin Bell at the far post, and “The King” unselﬁshly  played the ball back for Summerbee to hammer into the roof of the net.
49 mins: Reading waited  in vain for an off-side  decision against Mike  Doyle, and his cross was  easily converted by Summerbee.
64 mins: Bell at his best!  The City wizard deﬁed the  attentions of four defenders before bulleting  the ball past Dixon.
75 mins: Yet another great, weaving run by Bell,  who spotted Coleman turning up at the right place at the  right time. The ball was slid into Dixon’s goal.
79 mins: The  usually tough-as-teak  Coleman was forced  to limp off after a  challenge from  Bacuzzi. Young took  the free kick and there was Summerbee’s hat-trick!
80 mins: The Biscuitmen had become crumbs, and could only  stand and admire Young as  he raced through  unchallenged to thump the ball home.
lt was a brilliant  performance, and the Reading manager, Roy Bentley said afterwards: “Our only consolation is that we were beaten by a great team. I think City will  go all the way to Wembley. Unfortunately, this only proved he was a better manager than a clairvoyant. Joe Mercer said “l was delighted with the way the lads played tonight. I don’t think there are many defences in the country that could have stopped them in this mood.”