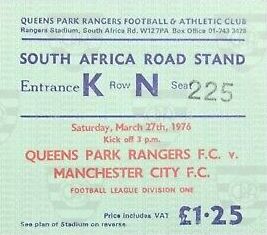 Hartford Sent Off As Fists Fly Manchester City boss, Tony Book lashed out at Wolverhampton referee, Terry Bosi, last night after Scottish International, Asa Hartford, was sent off at QPR.
Stormed Book: “It was a diabolical decision. Once again, the real offenders got away with it. Yet it was obvious who they were. The referee had completely lost control of the situation”
Hartford went off 15 minutes from time after a clash with Dave Thomas as punches and kicks were thrown when other players became involved.
In the end police came on to the field to help referee Bosi restore order.
Said Dave Sexton, boss of 1-0 winning and table topping Rangers: “There were other punches flying about and perhaps Hartford was unfortunate but he seemed to lose control
DON EVANS WRITING FOR THE NEWS OF THE WORLD 28TH MARCH 1976