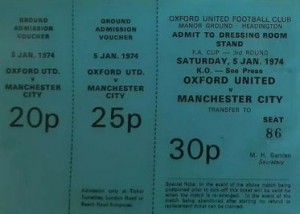 City were as smooth as silk in chalking up victory on their first visit to Oxford in any competition. The Blues capitalised on every mistake by the nervous hosts, the rout starting as early as the 8th minute when Denis Law leapt high to head home a corner from Rodney Marsh. Oxford’s pre-match promise of carrying the light to the opposition simply evaporated from that point forward and Mike Summerbee prodded City further in front in the 25th minute with Marsh adding the next on the stroke of half-time.
There had been one respite for Oxford when Hugh Curran converted a penalty after he’d been brought down. The second half was an identical story with Law and Summerbee scoring again. Graham Atkinson, the only Oxford player who could match City’s skills, scored a brilliant goal near the end to give his side slight compensation.
FROM AN ARTICLE PUBLISHED IN THE CITY PROGRAMME 6TH OCTOBER 1984