IT WAS one of the best cup finals Wembley has witnessed in years. It was also one of the most sporting .. on the field as well as off. Fans from both sides welded a tremendous rapport that should augur well for future relationships between Manchester City and Newcastle. The Geordies are more than welcome at Maine Road the sincere hope is that City fans are made just as welcome when they go to Tyneside, particularly for the First Division match later this season. However, no greater was the sporting spirit epitomised than in the City dressing room after the 2-1 victory with those glorious goals from Peter Barnes and Dennis Tueart. And it was Tueart who sparked it all off by immediately securing a Newcastle shirt to wear for the Trophy presentation and victorious lap of honour. 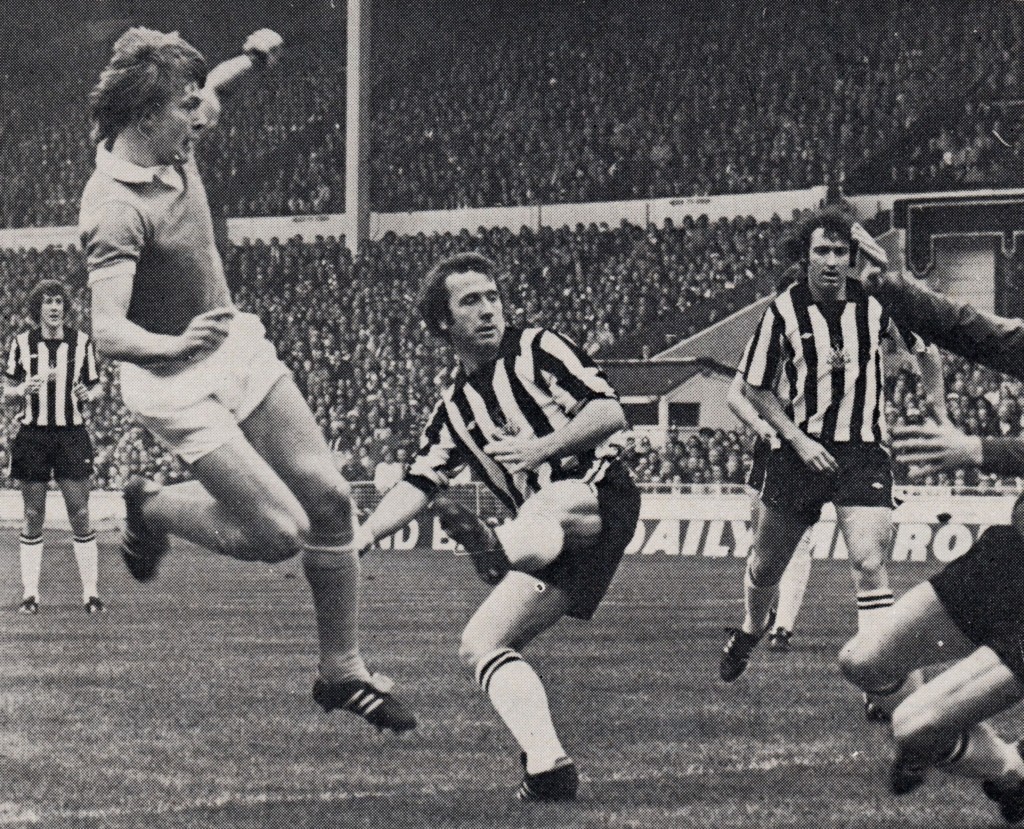 Ironic that a Tynesider should win the cup from the Tynesiders! That’s why Newcastle-born Tueart immediately took.the League Cup, brimming with champagne, to offer round the disconsolate United player in the Wembley losers’ dressing room-never a happy place on cup final day. 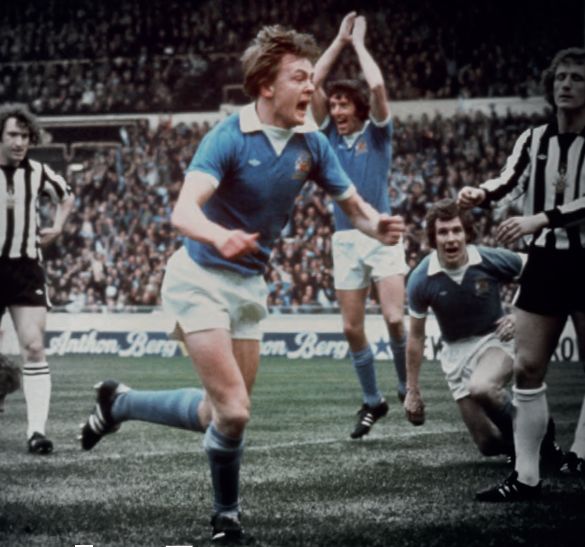 Tueart’s gesture was appreciated by Newcastle players but as City’s England winger said frankly: “What else could I do in the circumstances. They have some wonderful fans up there and I used to be one of ’em as a kid.” However, there was no such gloom in the City camp. The fifth major cup final in seven yearsvictory in four of them-City’s win saw them become England’s first European qualifiers for next season. They now go into the EUFA Cup with the burning ambition to do better than their last mission in that tournament. It was September, 1972 when the Blues, having finished fourth in the First Division, met Valencia at Maine Road where the Spanish side held on for a 2-2 draw winning the second leg of the first round 2-1. Saturday’s success was a tribute to the magnificent response manager Tony Book received from his players. And the first to greet them with the cup when they went back down that long dark tunnel was the man who didn’t make itEngland midfield star Colin Bell. He met them with glasses of celebration champagne as a battery of television cameras made a permanent record of that most glorious of moments in a soccer player’s career. 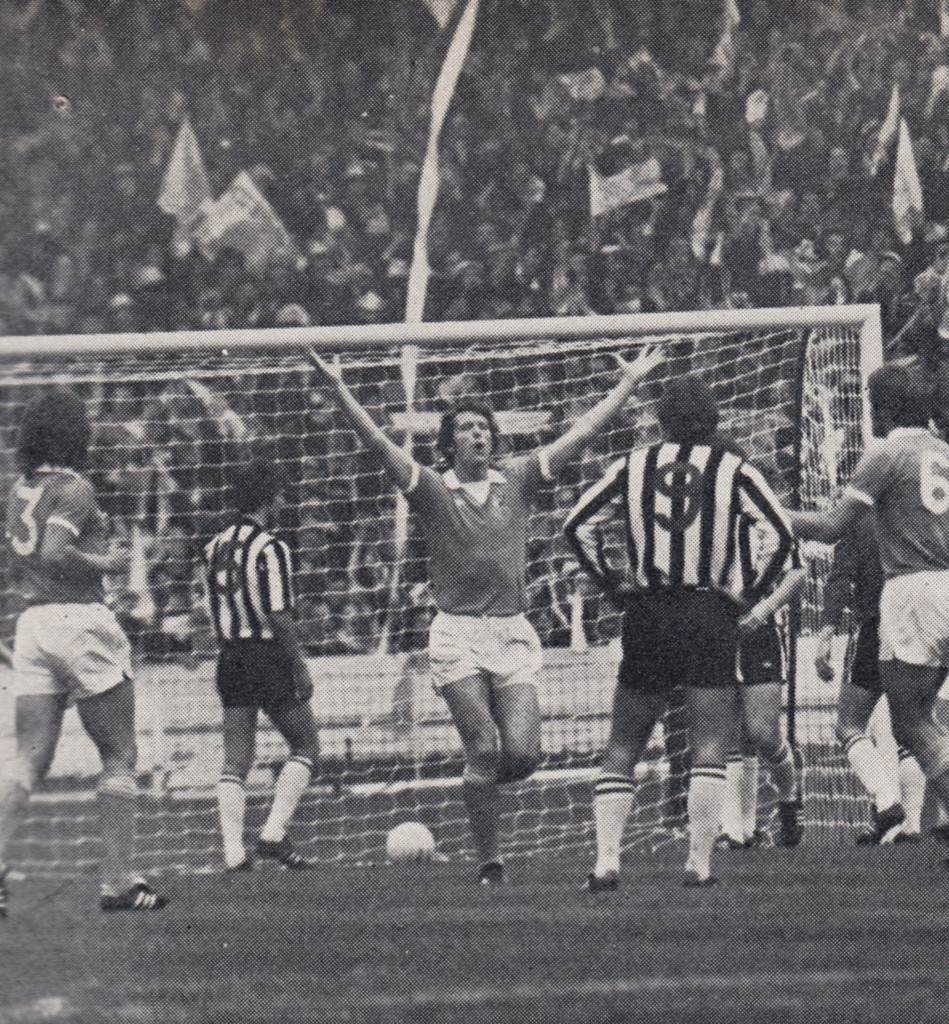 But there was drama for City, too. Centre half Dave Watson who almost did not make the final because of a recurrance of the back trouble that had kept him out of the two-legged semi final against Middlesbrough, had a badly gashed left eye, the result of a collision with Alan Gowling when the Newcastle striker caught him with a glancing back header. With Watson on the treatment table, the cameras hovered as Leo Caprio, the club doctor, stitched the wound assisted by physiotherapist Freddie Griffiths. And at the same time Watson was able to bravely reconstruct the incident of how he got the injury to the commentator. Just shows what a Wembley win can do for the spirit! The dressing-rooms at the famous old stadium, reconstructed at a cost of £100,000 apiece, were then filled with Pressmen for the after-match quotes. Flushed with success, City players were only too anxious to give their version of how the match had gone; where it had been won for them, lost to Newcastle. 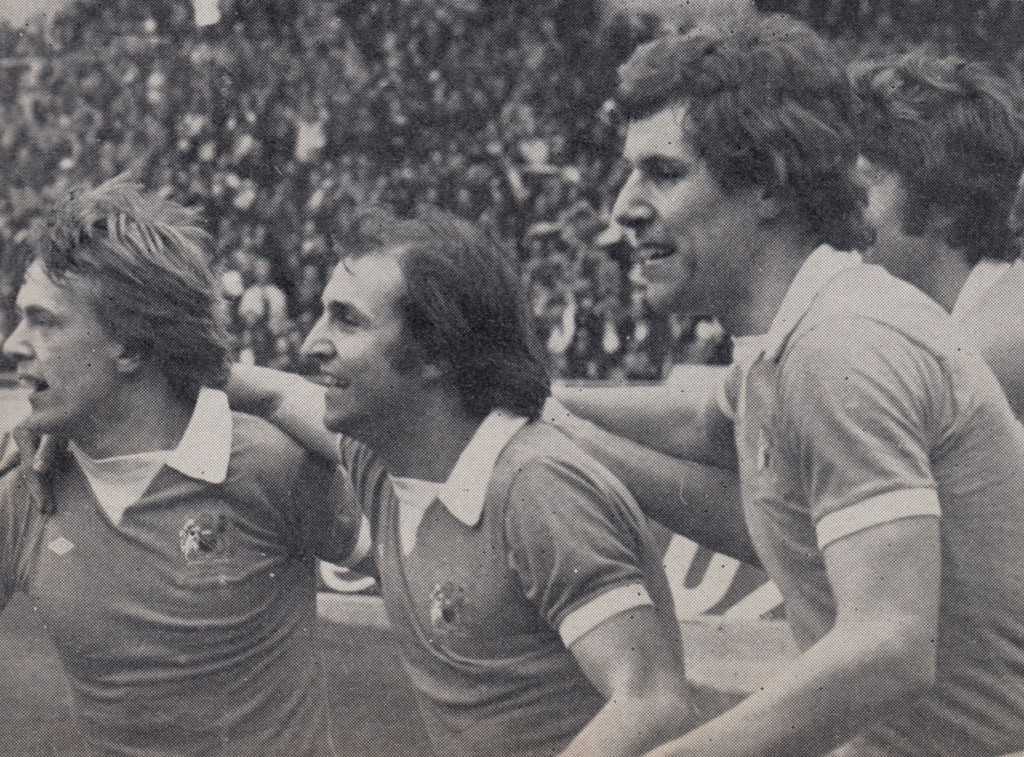 Still the champagne flowed. Dennis Tueart offered me the cup. “Go on take a swig while there’s some left. It won’t be there much longer,” said the man who clinched the trophy with that breathtaking and truly memorable overhead kick just 60 seconds after half time. Soon the atmosphere calmed. It was time to go. Through those massive doors that bar entry to the famous Wembley tunnel went the City coach. And there to greet them were those lovely City fans. Even the disappointed Newcastle supporters, trudging wearily back to London for that long journey home to the North East, had a salute for the heroes of the day. Like I said . . it was a sporting League Cup Final all the way along the line. And that’s the way it should be. article by Peter Gardner from The City programme 6th March 1976 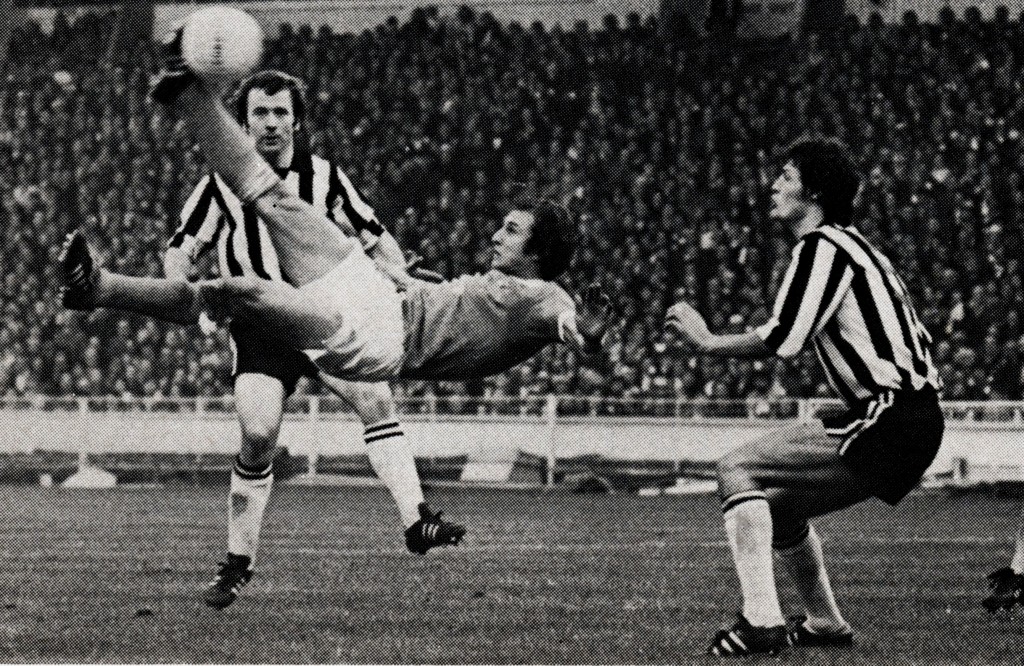 from DENNIS TUEART – MY FOOTBALL JOURNEY By Dennis Tueart – … then a minute into the second half, I had my moment, the moment people remember me for more than any other. It was so soon after the restart that a lot of people missed it because they were still coming out back from the toilet or from getting a drink. It was a real team goal. Joe Royle got possession and gave it to Alan Oakes in the centre of midfield. He played it to Willie Donachie who was always attack minded. He put in a high cross, and Tommy Booth, at the far post, headed it back across the area as I broke into the centre of the goalmouth. I’d gone in slightly to far and the ball came just behind me, so I had to adjust my position and perform an acrobatic overhead kick. Right off the laces, as they say. I knew I’d made good contact, but I didn’t actually see it cross the line. It was only when I landed and saw the ball bouncing back off the stanchion that I realised it was in. Maybe that goal was partly down to me playing a lot of cricket, tennis and squash. I was good at judging the flight of the ball in midair. I think that if Asa Hartford hadn’t grabbed hold of me afterwards, I’d probably still be running around Wembley now. …After the game, when I was being interviewed by ITV, I was busy explaining how thrilled I was, and in the background all i could hear was Mike Doyle yelling “Ask him about the two chances he missed. Ask him about those.” Mike had a bit of a go at me at half-time, and it shows what a demanding skipper he was. As I basked in my glory, he was reminding me that I hadn’t played the perfect game. Mike Doyle was not someone who I was friendly with off the pitch but his desire to be a winner was obvious and something which I respected. Manchester City defender Dave Watson did not get much sleep during the week leading up to the League Cup final against Newcastle United. He had a slipped disc and found it more comfortable napping on the floor instead of a bed when manager Tony Book took the team to the Champneys health spa in Tring for four days to prepare for the match. He got a game. Helen Turner, a flower seller from Manchester, spent £1.50 for a ticket to the standing enclosure in Wembley’s East Stand to watch her team. Tracey Book, the manager’s 10-year-old daughter, brought a teddy bear to the ground as a good-luck mascot. All three had a memorable day. The Blues were without injured Colin Bell in midfield and defender Glyn Pardoe. Watson, however, played a starring role in the heart of the City defence as they held firm against Newcastle’s early pressure. City were all about attack. “We were the type of side that played to win,” says Tony Book. “We didn’t worry about how  our opponents played or what they did. It was how we played. We had always been an attack-minded side when I was a player so I didn’t change that as manager.” 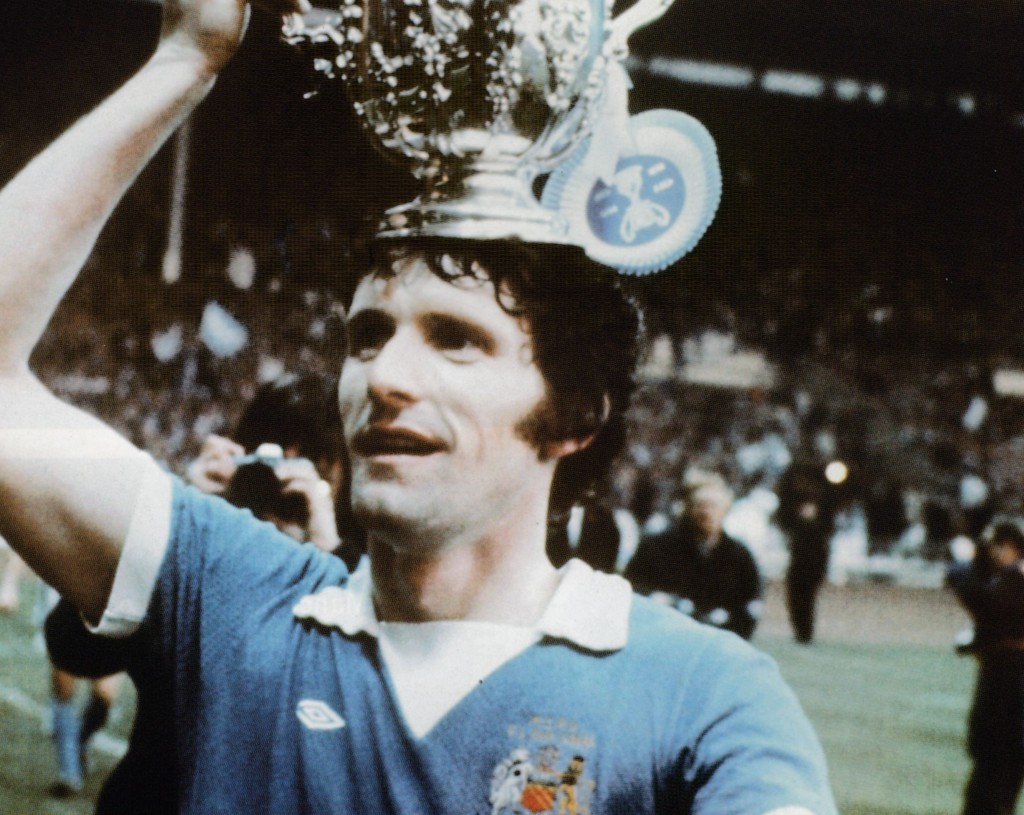 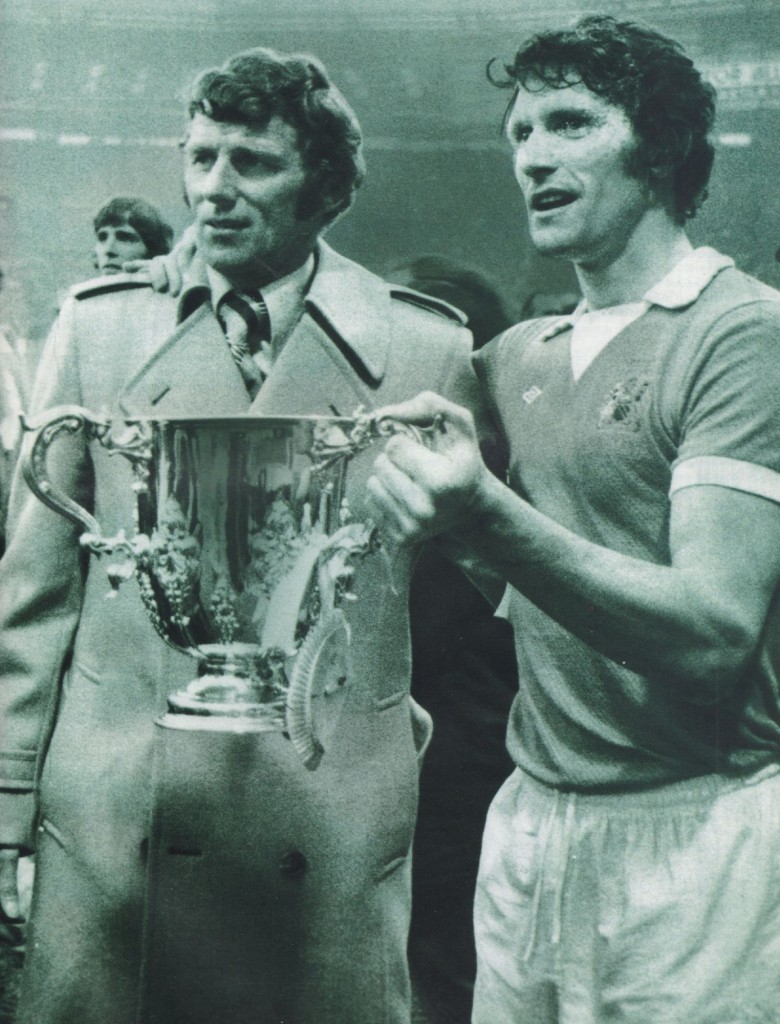 City were awarded a free kick in the 11th minute. Asa Hartford crossed the ball to Mike Doyle, the captain, at the far post. His header across the penalty area was half-cleared by the Newcastle defence. The 19-year-old Peter Barnes pounced to hit the ball left-footed on the half volley into the goal for a 1-0 lead. Ten minutes before half-time, Alan Gowling toe-poked the ball into the Manchester net for the equaliser. Then, in the first minute of the second half, City attacked down the right and Alan Oakes swept the ball to Willie Donachie on the left. He crossed to the far post where Tommy Booth headed the ball towards the penalty area. Out of the blue, Dennis Tueart executed a spectacular overhead kick that bounced into the far corner of the Newcastle goal to secure a 2-1 victory. Watson collided with Gowling during the match and TV cameras showed his head injury being stitched up in the dressing room afterwards. He was happy. Turner, the flower seller, joined the players on their lap of honour. She was happy. And the Books still have the teddy bear, and the suit worn for the cup final picture shoot. Tony Book had become the first player and manager to win the League Cup. Adapted from an article in The Sunday Times 13th January 2008 BOB WILSON’S MATCH POINT
I agree with Frank Clough that City skipper Mike Doyle was their Wembley ace. The first banner I read said “DOYLE EAT’S MAGPIES” but his performance offered much more than hardness. He was dependable and creative, and his reading of the Newcastle moves did much to shackle MacDonald and Gowling. When manager Tony Book decided to dispense with Rodney Marsh’s services the team’s reaction hung in the balance. That they reacted as the 1976 League Cup winners is due mainly to the example of the man who skippered them, Mike Dolyle FROM THE SUN 1ST MARCH 1976 PICTURES BELOW FROM THE EVENING CELEBRATIONS KENNY CLEMENTS WITH HIS FIANCE, JANET
.