It was evident from an early stage of the 1983-84 Second Divison season that four major clubs would be fighting for the three promotion places. But United inspiration Kevin Keegan saw it as two clubs fighting for one remaining place. “Chelsea and Sheffield Wednesday were always going up that season;” Kevin says. “They were better-balanced teams and had better squads, so the two fighting for the third place were Newcastle and Manchester City. “And that’s why our two wins against City were the most crucial wins of that season. We established a psychological advantage by beating them 5-0 at St. James’ in the October – after all, you don’t beat a side 5-0 if you’re not better than them. “Then by the time we played at Maine Road in the February we’d slipped a little way behind them and it was essential we got the victory to pull them back. Happily, we did that.” Many observers who were inside a sold-out St. James’ on October 29th, 1983, reckon the United performance that day was as complete as it was possible to be. …Peter Beardsley made the day his own with a hat, trick, starting with a decisive eighth-minute finish after Chris Waddle had all but rounded City keeper Alex Williams. City held on in the face of United’s free-flowing attacking football until Keegan himself, who earleir hit the post, rounded off a great move by converting Waddle’s cross. With a two-goal cushion, United, in the comfort zone, stepped it up in the second period and after a Wes Saunders shot was cleared off the line, Beardsley notched his second on the hour after Williams had saved from Waddle. Beardsley, showing all the fizz that would make him a future star, slotted in his third and United’s fourth from Waddle’s pass, and finally Waddle himself scored the goal he so richly deserved with a 20-yard shot inside the right post close to full-time. adapted from article in Newcastle away programme 2nd January 2008 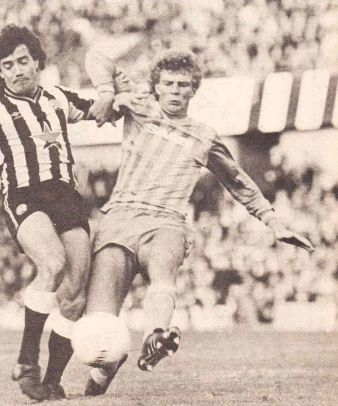