YAYA PUTS UNITED TO THE SWORD ‘WE’RE TAKIN’ THE POZNAN TO WEMBERLEE’ was the cry from the Manchester City fans as they certainly became the Blues’ twelth man in this first Manchester Derby to be held at the stadium. It was City’s first FA Cup Semi-Final for thirty years, and amongst the Blues’ fans there was a carnival atmosphere, whilst United’s followers seemed more subdued and, dare I say, full of vitirol.
Before the kick-off The New Wembley ‘rocked’ like it had never done before as the City faithful, ‘man and boy’, turned their backs to perform their now famous Poznan celebration. ITV presenter Adrian Chiles commented “You can feel the whole stadium moving” at that moment.
The game kicked off, and it seemed on the pitch City were struggling to get a foothold in the game, as United controlled the midfield right from the off. It appeared that maybe the absence of Carlos Tevez was being felt more by the Blues than Rooney’s absence was being felt by the Reds. On the quarter hour United, to be more exact, Berbatov, had two guilt edged chances to take the lead. Park stabbed a pass through City’s defence and with Berbatov free in the box with just Joe Hart to beat, the Bulgarian hit a great shot, however England’s number one somehow spread himself to sensationally deflect the shot away, however in seconds Nani had pounced on the ball and sent in a great low cross, which beat Hart and with Berbatov sliding in just a yard from goal it looked like a certain goal, when it looked easier to score than miss, he missed! Scooping the ball over the bar. 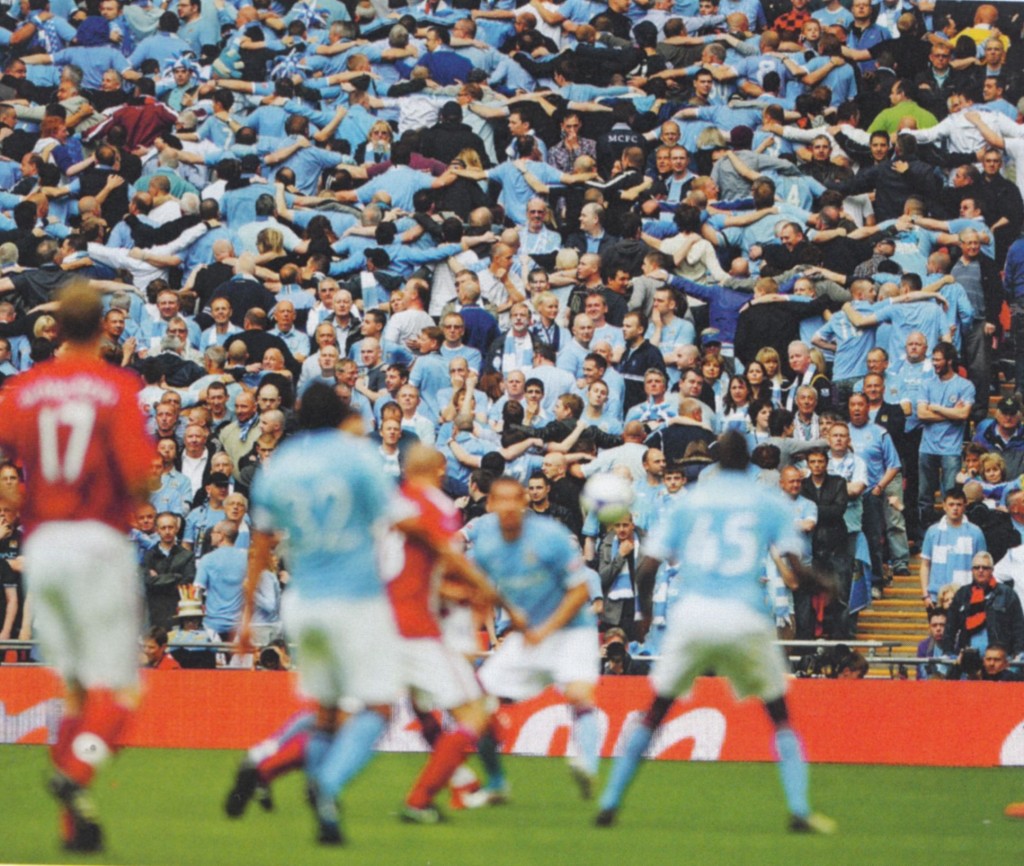 Although Ferguson’s side were still dominant up to the half hour, they couldn’t trouble Hart again.
City began to push forward and hold a higher ground, they had their first real attempt on goal when David Silva crossed low into the box, Mario Balotelli couldn’t quite bring the ball under control and it fell to Gareth Barry, with his back to the goal he managed to turn and at a tight angle let fly with a shot which appeared to trouble Van der Sa, but in the end hit the side netting.
Super Mario Balotelli was the first to really test Van der Sar as he hit a magnificent drive drive from all of 30 yards which the United veteran just managed to tip over the bar.
City were keeping the pressure on and before the break had two more great chances. Vincent Kompany, magnificent in defence, showed his skill at the other end of the pitch as he curled a twenty yard shot just inches wide with the United custodian scrambling to reach it. Kompany’s defensive partner, Joleon Lescott might think he also should have scored minutes earlier, a cross came to him just twelve yards from goal and he volleyed it over the bar when he really had more time to bring the ball down first.
City went into the break in control of the game, with De Jong and Barry magnificent in breaking up any attempt by United to create an attack .
The players said after the game that the half-time dressing room was full of emotion and certainly Roberto Mancini sent them out pumped up for the second half and the Ivorian athlete that is Yaya Toure was to be the star of the show, he covered so much of the Wembley turf that even King Colin ‘Nijinsky’ Bell would have been proud to lend him the his nickname that day. It was Yaya who scored the goal that lifted the roof off the stadium just seven minutes into the second half. Silva cut out a ball from United’s defence but failed to control the ball and it fell to the feet of Michael Carrick just outside United’s penalty area, within seconds Toure had pounced on the ball, he took it past Carrick into the box, he then coasted past Vidic to slot the ball under Van der Sar, and it was 1-0!
The noise in the stadium was deafening and it stayed that way as City had wave after wave of attacks conducted by Toure. Indeed United had only one chance in the second period, a well taken free-kick on the edge of the box which deflected off Balotelli in the wall and produced a wonderful save from Joe Hart, who had to change direction in mid-air to touch the ball on to the bar.
Paul Scholes, who had been totally ineffectual in the second half went on to show his frustration late in the game, as he studded Pablo Zabaletta high on the thigh to earn his marching orders. The City fans waved goodbye to the ginger midfielder, and also to any chance United had of salvaging anything from the game.
After 94 minutes, referee, Mr Dean, blwe the final whistle and City were through to the final.

The City players and staff celebrated on the pitch, however Rio Ferdinand, who had earier in the morning celebrated the birth of his third child, showed some childish traits himself as he ‘went’ for Balotelli shouting a tirade of abuse at the young striker. Four or five United players joined in, pushing and pulling the shirt of the Italian, who just stood there smiling away to himself, and with a cheeky wink to Rio that said we’ve won! the United players left the pitch with the same vitriol their fans had shown outside the stadium.
The ground now just full of City fans saw the players and staff pay tribute to the City faithfull as they turned and performed the Poznan to the sound of Blue Moon booming around Wembley..