SUPER MARIO SCORES A BRACE TO PUT CITY 2-0 UP 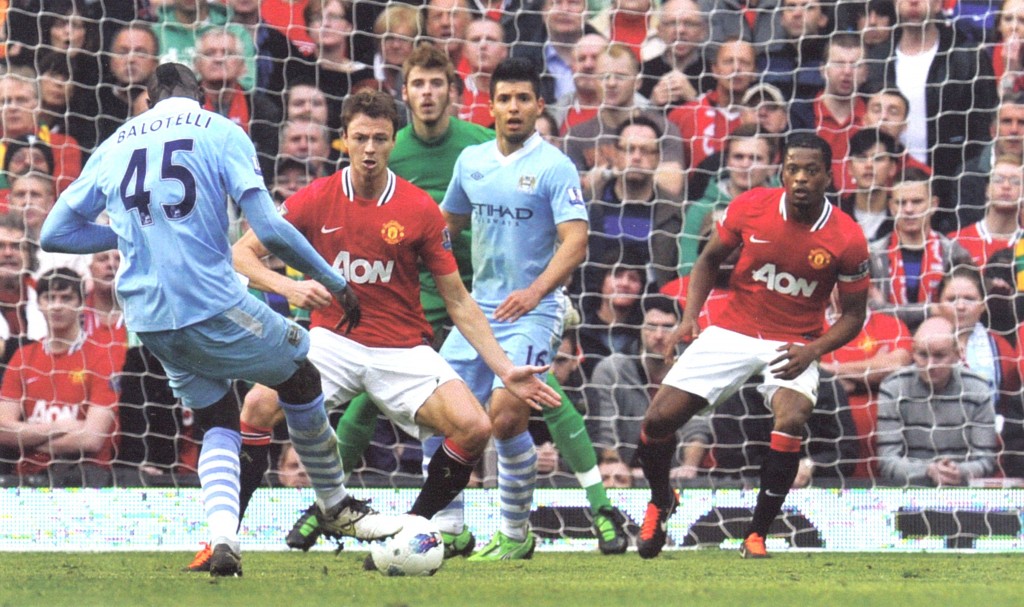 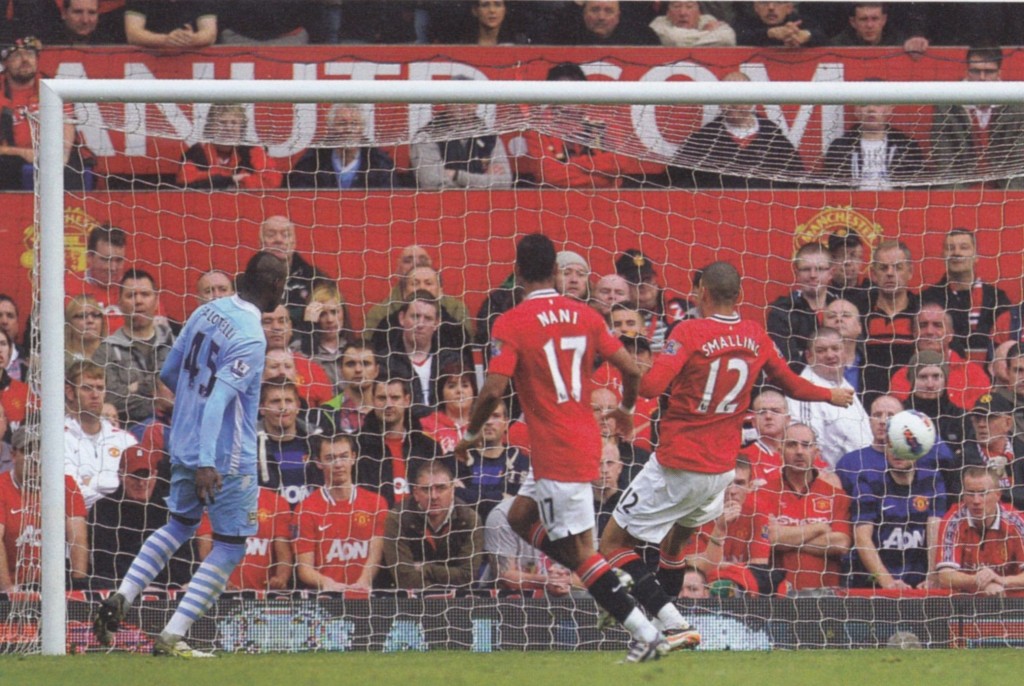 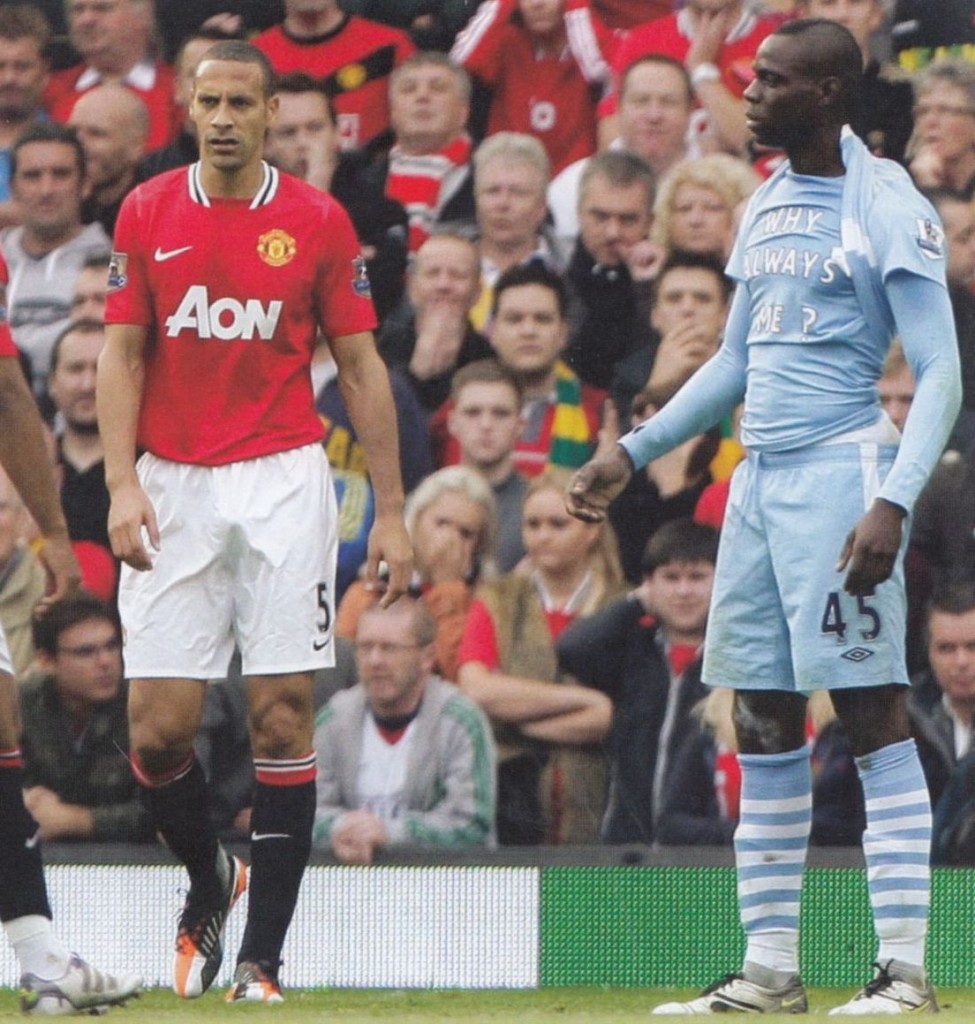 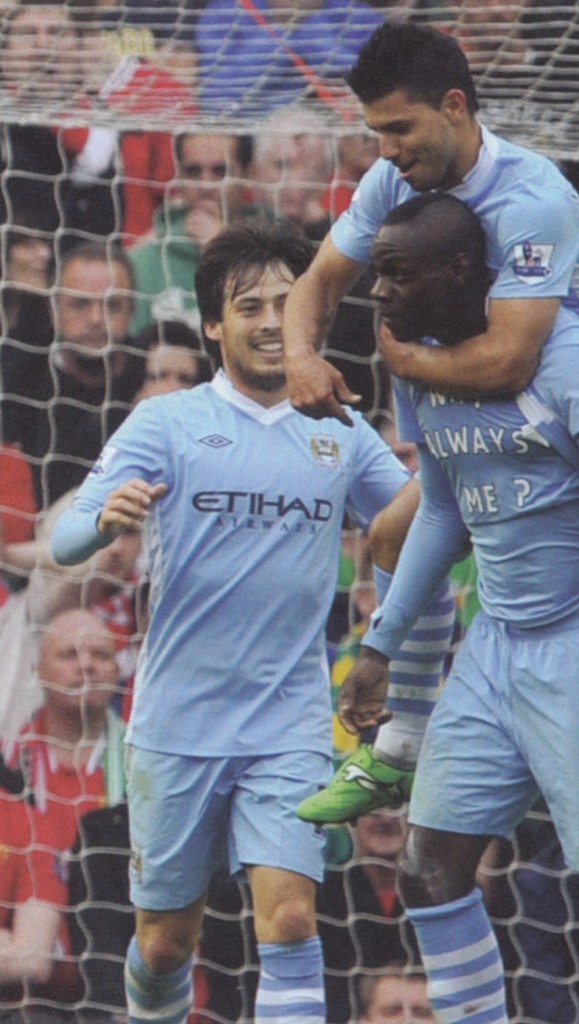 THE neighbours aren’t just noisy any more — they are shattering the windows and kicking the front door in.
This was City’s statement of intent, the one which said ‘you’ve had it all your own way for too long, it’s our turn.’United — 19-times champions — were totally humiliated and it has put a right dampener on Fergie’s 25th anniversary party which comes up in a fortnight 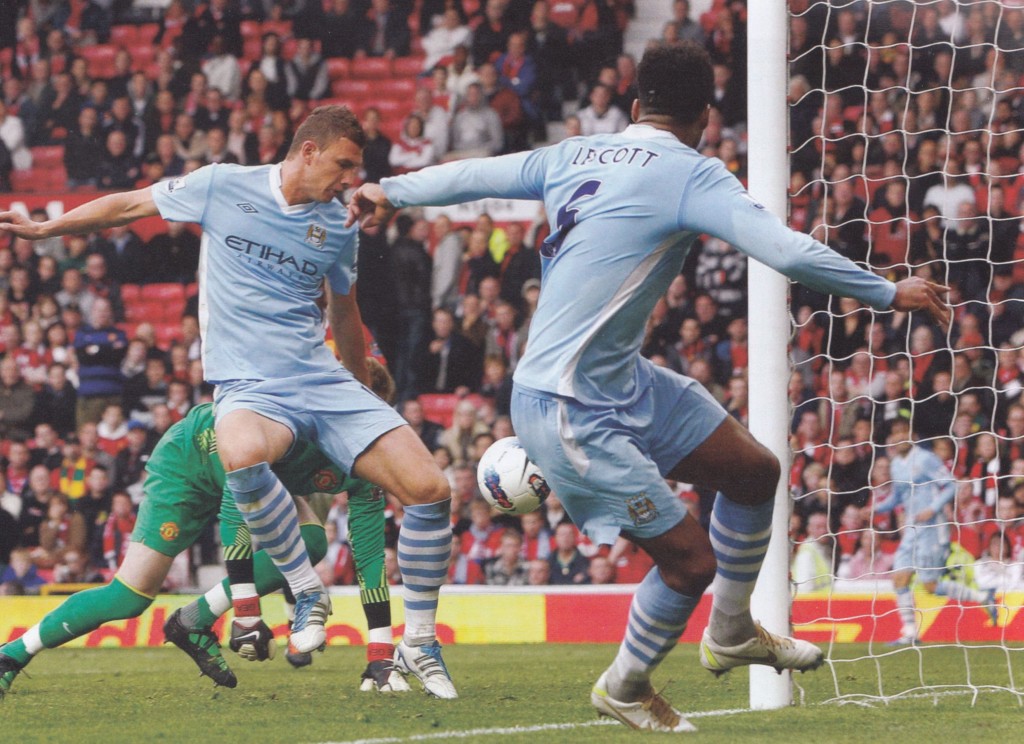 You had to go back to 1926 for the last time City produced a scoreline like this at Old Trafford and it was only one goal shy of United’s all-time record home defeat of 7-1 against Newcastle in 1927.
Ferguson described the afternoon as “embarrassing” which was putting it mildly. The measure of how bad was that te manager was complaining they should have put the shutters up at 4-1 behind.
United had to play virtually the whole second half with 10 men following Jonny Evans’ red card for hauling back Mario Balotelli.
But they were already a goal behind by then and, had Evans not grabbed the City striker, Balotelli would probably have doubled the lead anyway. 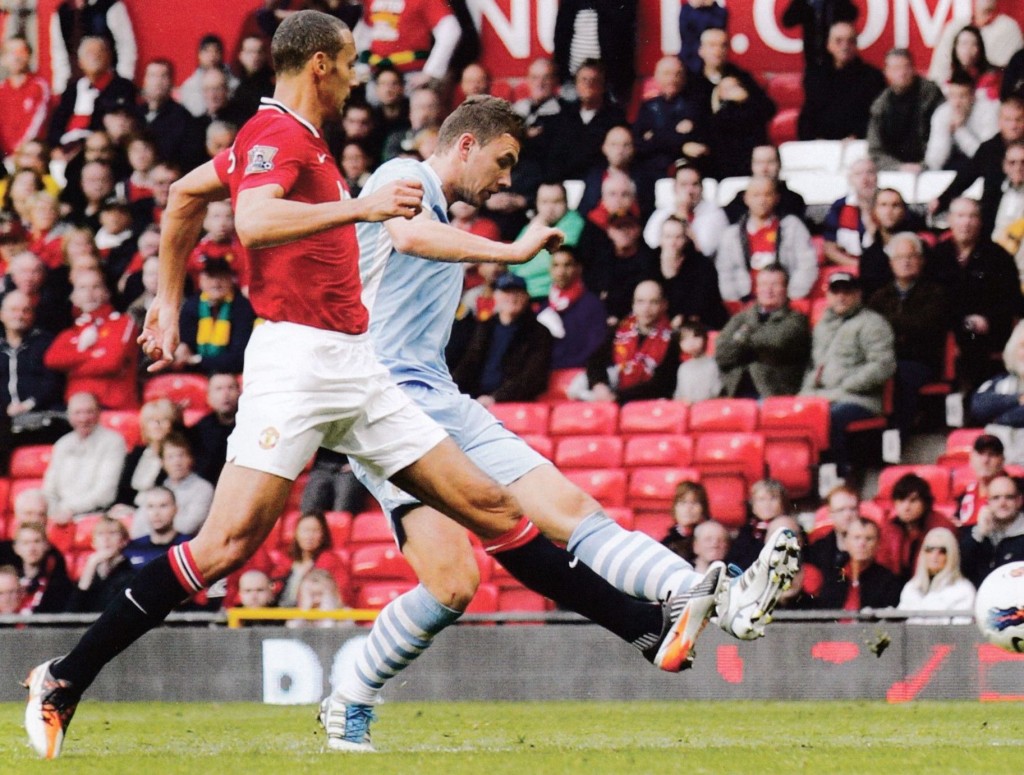 The Italian, 21, spoke during the week of how he had matured and loved the quiet life. But the pre-match was dominated by talk of how he had then almost burned his house down by setting off fireworks in the bathroom.
He certainly stuck a rocket up United here after Fergie’s men, inspired by Ashley Young, dominated the opening exchanges.
And it was a beautifully worked opener on 22 minutes started by David Silva who fed James Milner down the left.
The England midfielder cut it back low, Silva let it go and Balotelli coolly side-footed into the corner. He celebrated by lifting up his top to reveal a T-shirt which read “Why always me?’ and was promptly booked for doing so. It seemed a bit harsh by ref Mark Clattenburg but those are the rules and you would have bet good money on the daft lad getting another silly booking.
United could have equalised just before half-time when Wayne Rooney neatly cushioned a deep cross into the path of Evans.
But the centre-half got his feet in a tangle, had a wild swing with his right boot and the ball struck his left knee and bounced away.
It was one nightmare after another for Evans because a minute after the re-start he tugged at Balotelli on the edge of the box as he was going through on goal. As the last man, the Northern Ireland defender had to go.
Fergie was forced into a re- shuffle. Rooney dropped back into midfield, Chris Smalling went to centre-half and Darren Fletcher to right-back. City sensed blood and with Milner supporting Silva in the creativity department and Richards at his rampaging best down the right, United were on the back foot.
The second goal came on the hour with Milner passing to Silva getting the return from a delightful backheel, and his cross was on a plate for Balotelli to finish at the back post.
Milner again was behind the third in the 69th minute as he picked out Richards and Aguero had an equally simple task.
Mancini, now lauded by the City fans who used to be so sceptical of his merits, decided it was wise to take Balotelli off and replaced him with Edin Dzeko.
The home fans were given something to cheer when Darren Fletcher played a one-two with sub Javier Hernandez and curled in a beauty with nine minutes left.
But the United wheels completely fell off and City scored another three from the 90th minute. Gareth Barry’s header from a Silva corner was turned back in by Joleon Lescott and Dzeko finished off with his knee

.Then Dzeko nutmegged a shell-shocked Rio Ferdinand and released Silva who tucked in No 5.
Dzeko blazed over from six yards when he should have scored again but made it six from Silva — who had a hand in five goals — and United’s misery was complete.
At the start of the season, Mancini said City were a couple of yards behind United, last Friday he reckoned they had closed the gap to a yard. Now they’ve gone the whole nine yards and left United trailing in their wake.
SHAUN CUSTIS WRITING IN THE SUN 23RD OCTOBER 2011 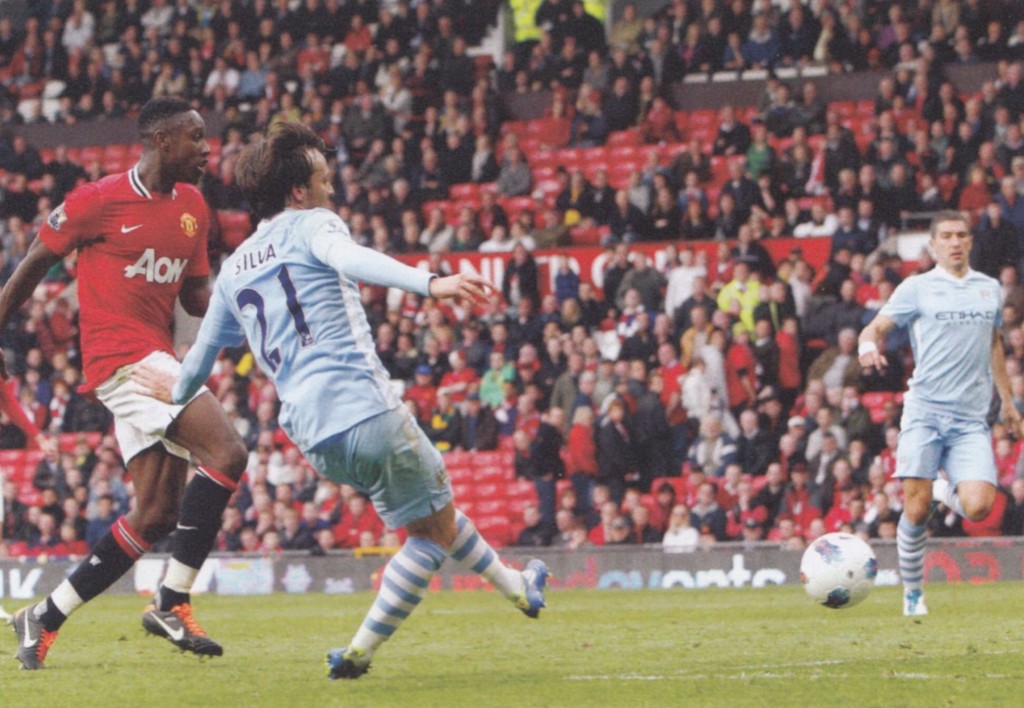 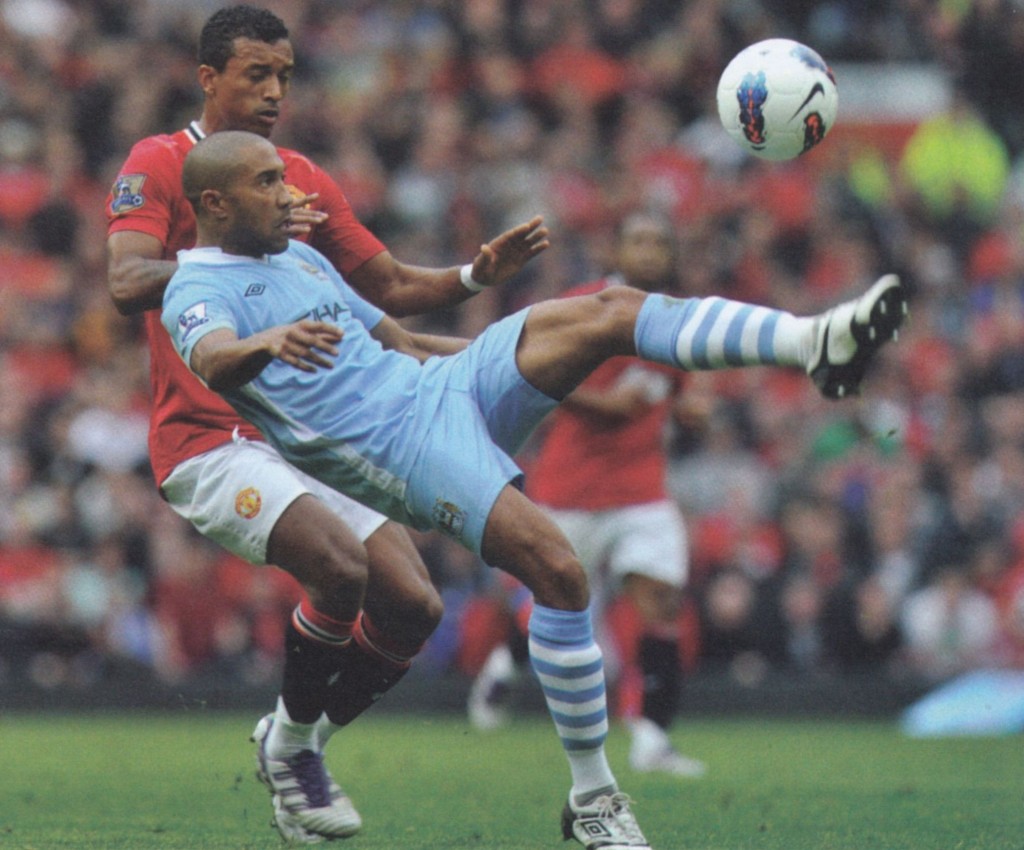 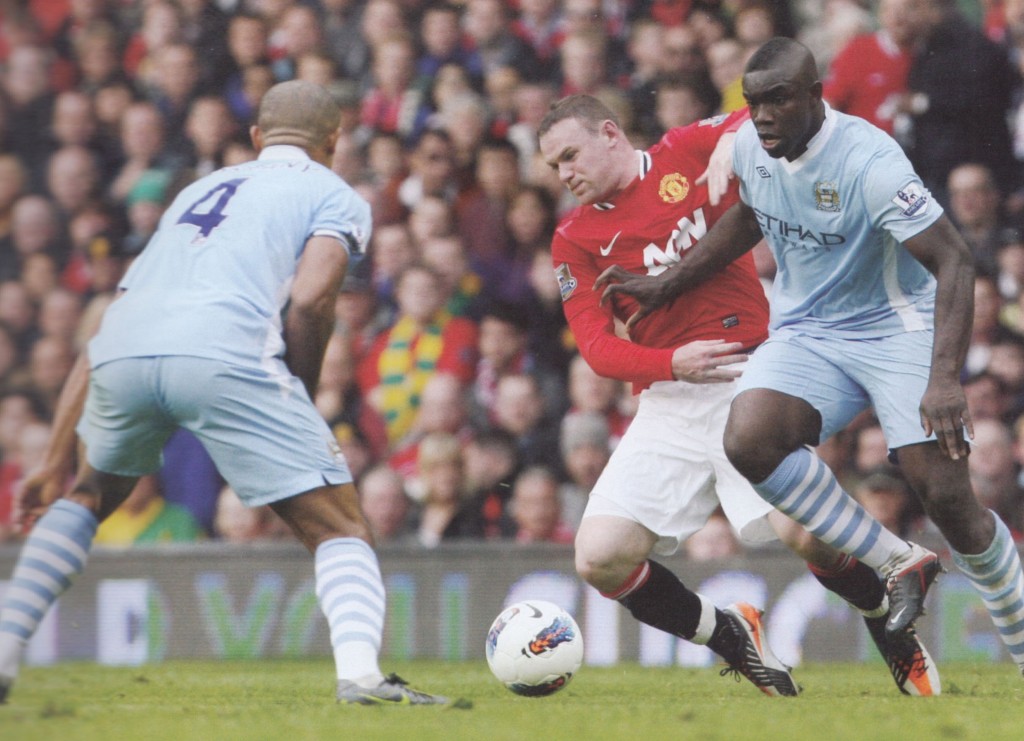 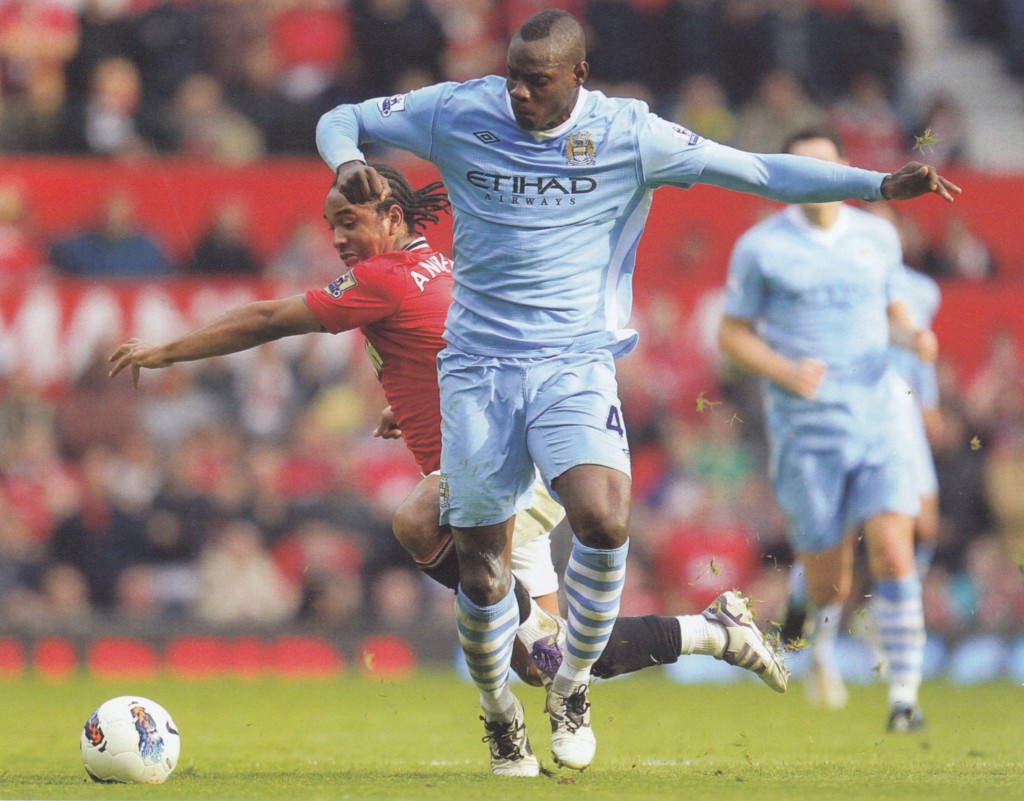 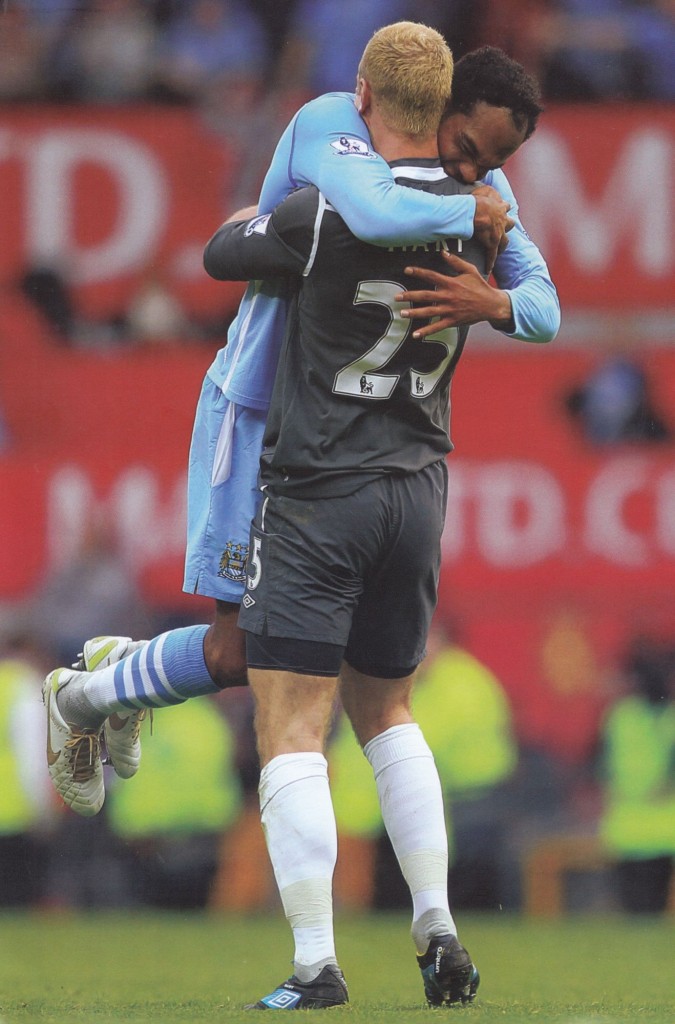