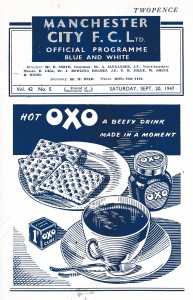 City fielded 4 players who had been signed within the previous 12 months: Alec Thurlow, deputising for Frank Swift away on international duty with England in Belgium; Jackie Wharton, from Preston; Roy Clarke and the latest acquisition, Irish blacksmith Eddie McMorran. United were at full strength.
The goalless game was generally uninspiring, although it did throw up some interesting personalities. City full back Bert Sproston was outstanding in all departmentsof the game, keeping a tight rein on mItten and finding time to set up attacks, and on the other flank ex United junior Eric Westwood blotted Delaney out completely.
Clarke came the nearest to scoring for City when after a superb twisting run he forced Jack Crompton to make a brilliant finger tip save. Other players who received a special mention were Thurlow, Aston and Warner.
FROM AN ARTICLE PUBLISHED IN THE CITY PROGRAMME 26TH OCTOBER 1986