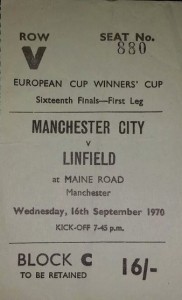 COLIN BELL BAGS THE ONLY GOAL OF THE GAME