Seventeenth in the table and 10 League games without a win (three drawn matches in that disastrous run) the Blues were told beforehand by manager John Benson “This is our Cup Final”. it was also the day the crowd bade goodbye to long-serving goalkeeper Joe Corrigan on the eve of his departure for Seattle Sounders in America after 17 years at Maine Road.
lt was an occasion, and circumstances, that really put the spotlight on big loe’s replacement, Alex Williams, who had taken over the goalkeeping spot on a permanent basis on the previous Saturday at Southampton. And but for Alex’s tip-top performance, Ipswich would probably have won in a canter.
The game was eventually decided on the 16th League goal of the season for John Wark, notched 11 minutes into the second half. Mich D’Avray evaded a threatening tackle from Tommy Caton and the Ipswich striker surged in from the right and crossed the ball. Both Steve McCall and Paul Mariner, who were closely marked, let the ball run through to Wark, out on his own. The Scot beat Williams by firing towards the far post and the ball flew in off Kevin Bond’s foot.
Although City were let off lightly the game could so easily have turned in their favour just three minutes earlier. In form Bond flicked a backward header over ’keeper Paul Cooper, only for McCall to pop up in the nick of time and clear off the line.
Ipswich were rarely stretched like that. Their international trio of Wark, Mariner and Terry Butcher looked first class throughout and but for Williams the Blues would have been in trouble long before the break. The ’keeper stopped a Mariner effort and made an exceptional stop from D’Avray.
Skipper Paul Power, having only his second match after an injury lay·off since January 29th, tried to inspire greater effort and attacking fIair, without success. Power began the game at left back but was then pushed into midfield to try and liven up the Blues. His surging runs got no response from the attackers. And Ipswich simply continued to grow in conhdence.
City’s overall effort could not be faulted. They made a willing fight back but there was little constructive about lt.
…A misty-eyed Corrigan, who took a farewell bow in the middle of the pitch before the kick-off, contributed “Don’t be too hard on the lads. They are trying their best and they’ll come through this, wait and see.”
FROM AN ARTICLE PUBLISHED IN THE CITY PROGRAMME 9TH NOVEMBER 1985 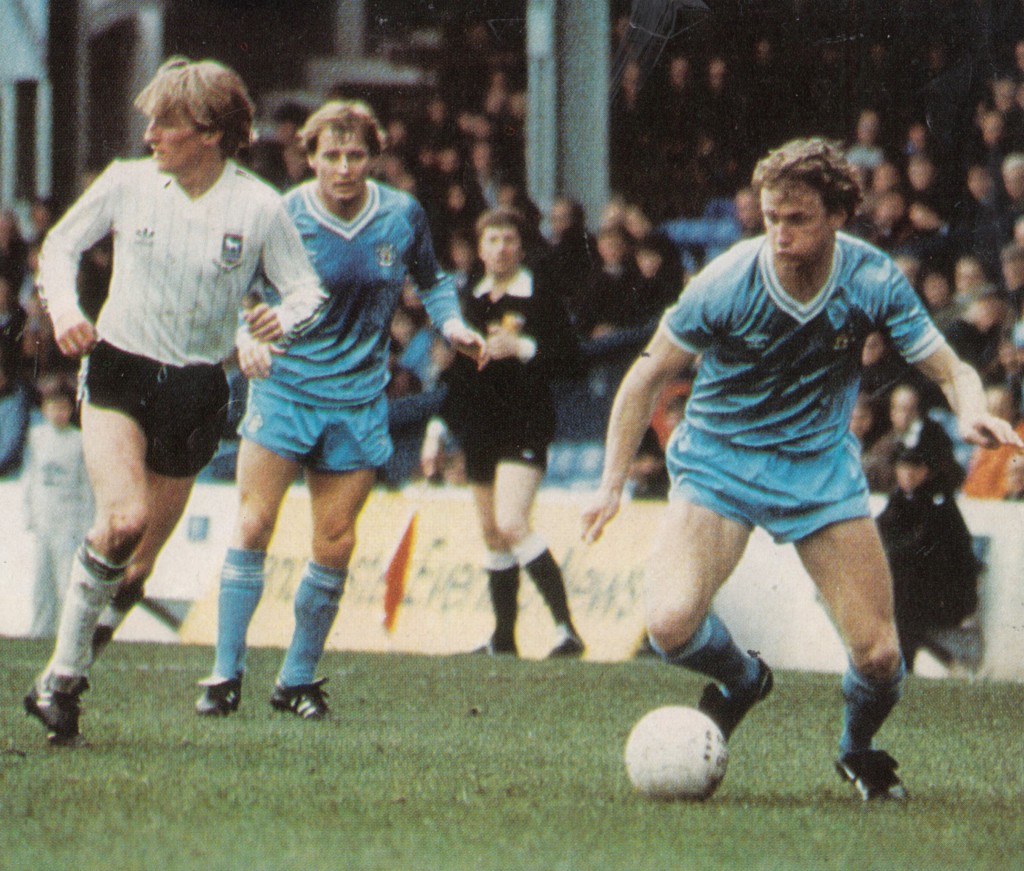